Sometime early Sunday morning my office suite was broken into.  My office has two areas, my assistant's area, and then my office.  The two are connected by locking doors, and there are two keys to the offices, mine and my assistant's. Nobody has access to these areas because they contain sensitive personnel records and other student information.

My assistant came in at 7:30 on Monday morning to find coffee spilled everywhere, files a mess, and all of the drawers gone through. Someone was at the computer and records show an "unknown device" was hooked to her computer at 1AM on Sunday.  We do not know what was up- or downloaded.

We see how they broke in.  It was a rather simple move that probably took place during business hours.  They basically rigged the locking mechanism so that it would be easy to enter after hours.

My office is an adjacent room, and there's no evidence yet that it was entered.  We're still examining the contents and computers.  It is not clear that they could easily breach the second door.

My interpretation is that this is someone searching for the smoking gun they are not getting via email inquisition.  I have been served, and filled, weekly FOIA requests and the critics do not have anything to go on.

So whether they have directly commissioned a robbery or perhaps just inspired it, this is what happens when evil people make up false narratives about what I do.

So thanks to USRTK, Vani Hari, Mike Adams, Brooke Borel, Eric Lipton, Paul Thacker, Charles Seife and the rest of those that failed to tell the truth of a scientist dedicated to public science and public education about science.  They have all written narratives that create false impressions, and sometimes outright dangerous lies. They have said made claims that I am an agent of Big Ag companies that can't be trusted to discuss science. They have painted me as a hated shill of a hated company, with no evidence that I ever broke a rule or did anything illegal. 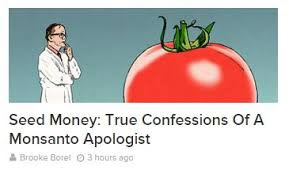 Yes, words do matter, and tragically false narratives can inspire harm those targeted. As planned.

From Twitter:  "The extremists don't burn the witch, they just pass out the torches."


This is what happens when you treat a scientist like a villain. Whether financed by US-RTK, Organic Consumers Association or any of the other anti-science groups, or whether they are just lone-wolf losers looking to create problems, someone is carrying out their bidding.  This is why these are hate groups. They cannot accept the science, they hate scientists that teach it, and want us all to back down with this kind of intimidation.

My wife says that this is going to far and I should quit. My assistant, a thirty-five year, loyal, dedicated, underpaid and overworked state employee, has never felt so violated.

I feel quite differently. This kind of nonsense reminds us of who these people are. They have only heightened my resolve.  Education is winning.  People are changing.  Opinions are siding with the scientific like never before.  These are desperate times for these folks.  It is a pathetic turn on a sick story, and they are to blame for creating hate against a public scientist that does not deserve it.