How to Hassle a Scientist

When you can pick through someone's emails, you can assemble the story you want to tell, and use that manufactured story to harm their reputations.  Facts don't matter. If you had 5000 pages of someone's communications, what story could you tell?  The climate deniers and anti-GMO folks have it down to a science.

I'm seeing it happening today, again.  Over on Twitter I have still been enduring hostile harassment, this time from another set of claims from another newly-established account.  They again play off of the tired trope that I'm some agent of Monsanto and am financed by them.

This is posted for two reasons.

1. Does their repetition of the same misinformation lead others to have questions?  I'm glad to clarify them here.

2. It is good to show how they cherry pick unrelated events and make them seem related by strategically gluing them together. 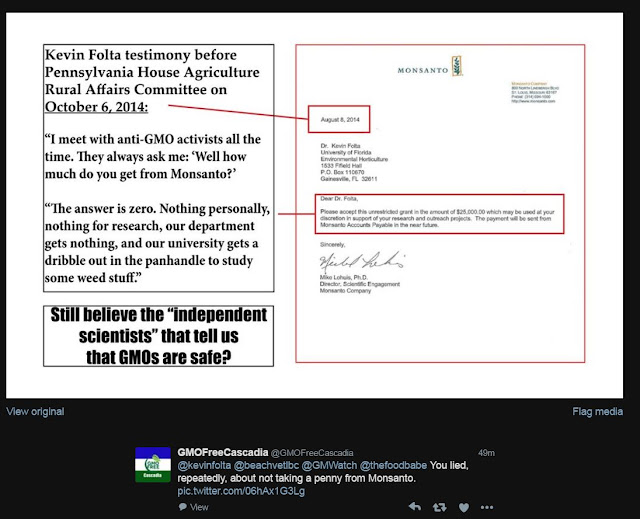 On the left, my words.  On the right, a letter in my emails that were confiscated under public records laws.

What they don't tell you is this-- the letter on the right was not accurate, and the company had to resubmit the letter and check to the university, not to me directly. A different letter was submitted some time later.  See, they leave that out.

In their defense, they don't know that.  Only me, my assistant, and the check writers know that.  Of course, that is not reflected in my seized emails because it was solved by a phone call, and the evil activists don't know and don't care. They have enough here to manufacture the story they want to tell.

Of course, the correct letter explicitly discusses the words "unrestricted gift".  When universities receive money into their foundations, and their are gifts, meaning no expectations, they must specify "unrestricted gift" as language in the accompanying letter.

They did it wrong.  They had to take that one back and then re-send the check made out to the University of Florida and an accompanying letter that it was an "unrestricted gift" in support of my science communication workshops that taught scientists how to talk about science.

As has been stated many times, the funds allowed me to rent space, put out doughnuts, buy lunch, and distribute USB drives of science papers to the participants of my science communication workshop. It is supported by many donors.

Because of the activist blow up and threats against me and my family, the university attempted to return all funds to the donor, who could not take them back.  The university donated the funds to a campus food bank.

But activists don't tell that story.  Not a cent of company money was used.  None of it was for my research program or for me personally. Never was, never will be. The letter shown above, a mistake. The real letter had quite different language, but that one is not nearly as damaging to me, so use this one.  This is about maximum damage, not the truth.

That's why they use this letter, and that's why I'm glad to show it here.

This instance also illuminates the damage of activist harassment through public records requests. Here they take a letter out of the list and failed to tell the whole story.  They don't know the whole story.  They just tell the narrative they want to manufacture. The "unrestricted gift" story has been blown up in the activist media ad nauseum, so you can see this is a cherry-picked lynching again.

The statement to the Pennsylvania HoR committee was spot on.  I just examined all research funds coming to my university.  There was one researcher in the five years leading up to that note who received money from Monsanto for research.  He was out at the West Florida Research and Education Center in Jay.  He had something like $21,000 ($7k over 3 years).  It is all public record, as is every cent coming into a university. Those numbers were pretty fresh in my head.

And at the same hearing Stephanie Seneff, their hero, said that kids can be cured of autism if they eat organic food.  Yep.  Nobody too upset about statements like that.

We're a specialty crop state. Few farmers grow any GE seeds or Monsanto products.  They don't care much about my department, and since this whole situation don't talk to me and certainly will steer clear of any support of anything at my university.

The activists just forced me to shift the burden of paying for the  workshops form my own pocket and from kind donors- away from companies with deep pockets that should be funding public education more. IMHO.

They want to trash scientists that tell the truth about agriculture and science, end their careers if they can.  Foment anger and violence against them and their families.  Destroy their reputations.


These are not good people, and this instance is just another shining example of what we'll look back on someday and see how bad it was to be a scientist in America if you stand up for science.
at April 18, 2016