The story was a simple one.  A Houston museum's credibility was on the line when an employee booked an anti-GMO activist to come speak about "Poison in your food."  Decades ago Dr. Theirry Vrain used to publish papers on nematology and relationship to DNA restriction-length polymorphisms (good times in the 80's!), among other work. He's been out of hard science for some time now.  Since, he uses that credibility to be one of a handful of credentialed scientists that makes the rounds spreading false information about food, farming and associated technologies.

In short, I wrote an article about "Pseudoscience Creep," the phenomenon where poor-quality activist claims are weasling their way into our conferences, museums and other reputable forums. The idea is to steal the credibility of the venue and promote activist positions.

Museum officials and others asked me about Vrain's claims that there is poison in the food. I explained USDA crop-residue values, glyphosate mechanism of action, glyphosate pharamcokinetics, physiological thresholds and stoichiometry with gut bacteria.  I also noted that there are no actual data in published, reproducible experiments that support Vrain's claims.

Sure, you can find plenty of published opinions in predatory journals written by computer scientists and other charlatans. But there are no data to support the claims.  None.

I've seen, and debunked, his talks on YouTube. I also described how he is wrong about mechanism of action and he holds up the statistically-bankrupt Seralini rat paper as high evidence, and apparently does not understand relationship between correlation and causality.

So they asked him for real data.  He didn't produce it, so they asked that the event be moved to another more suitable venue. On his facebook page he claims that this is "Fascism", and that's laughable.  A museum asked for evidence to support claims. That's not fascism, that's science. Museums are places of evidence, not beliefs, and Vrain's unsubstantiated claims would grey that line and even harm the museum's reputation.

Fine with me. Invite the guy, wind him up, let him sell the snake oil.  Just don't do it in a museum.

I wasn't sure if he was uninformed or dishonest, so I gave him the benefit out the doubt.  But after seeing the response to what happened-- he's misrepresenting what science says, presenting biased, unsubstantiated claims that do not represent the consensus.

So what did the audience get to hear?

He said that the only successful GE products are roundup ready crops.  Of course, he forgets that his activism has stymied progression of good technology that could cover diverse areas and needs.

But he also forgets (or doesn't know) about Hawaiian papaya, Bt crops (that cut insecticide use), human insulin, cheese enzymes, and dozens of other minor products.

He uses Stephanie Seneff's cherry-picked literature reviews in predatory journals as his best evidence!  Like here: 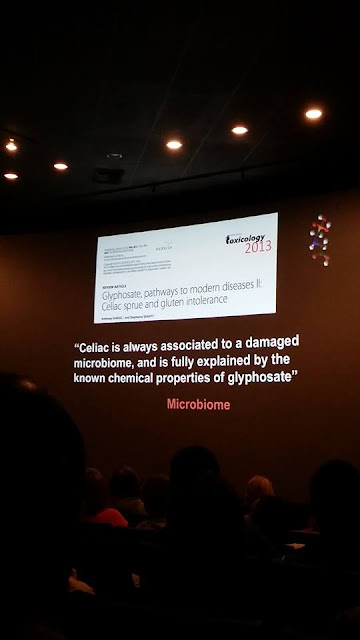 But that does not mean it is causal.  Patients with genetic forms of celiac disease experience symptoms no matter what.  Also, this is an opinion, not a result from research. That's what Samsell and Seneff do-- they publish opinion pieces that masquerade as science. Vrain knows the difference. Here he scares and misinforms and audience, treating a hypothetical and unsubstantiated link as evidence. 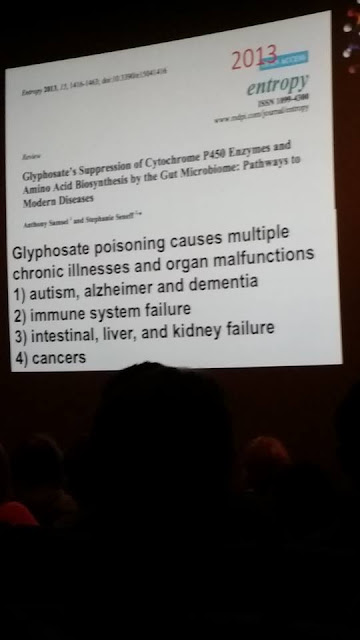 READ THIS.  "Glyphosate poisoning causes..."  Causes?  Causes?  Where are the data?  There no data to support those claims.   At best, you can induce changes in cells in a petri dish that are consistent with long-term diseases, but there is no evidence to support his claims.

This is exactly why this talk does not belong in a museum! 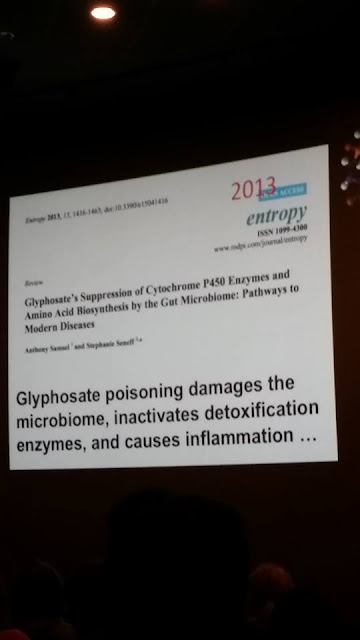 More Samsel and Seneff from opinion papers that have NO ORIGINAL RESEARCH. 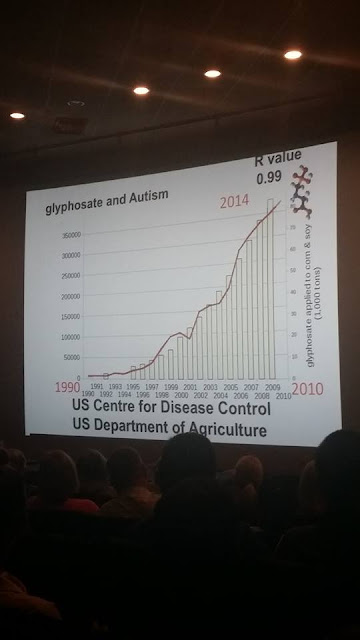 Here it is, the association between glyphosate and autism. The old trick to misinform an audience, confuse correlation with causality. Activists scaring people concerned about their food.


Super sad.  It is just awful that an audience even had to endure this nonsense.

And apparently, I'm to blame.  He posted this on his Facebook page: 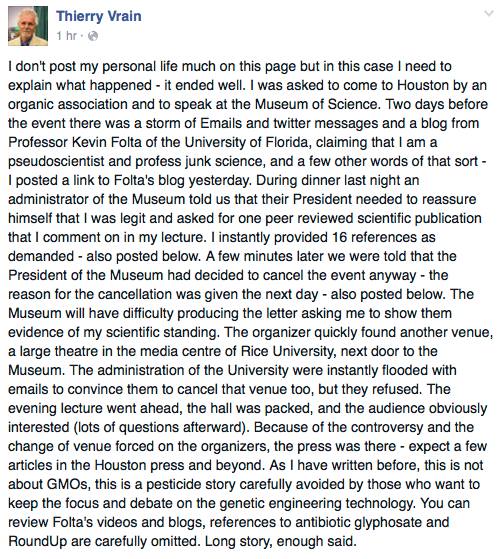 No Thierry, the museum does not want fear mongers spreading false information to scare people.  That's not what museums do, that's what activists do.

You're right, I don't discuss glyphosate as an antibiotic, because it is not a very good one.  My lab has tried to even test versions of the resistance genes in bacterial backgrounds and it does not even kill bacteria unless you add something to help it enter the cells. Plus, if it was an antibiotic, we'd use it as one. It is an herbicide.

So another chapter ends.  A simple blog wanting to keep goofy pseudoscience in its place ends up with a bad talk that just keeps fooling credulous listeners.  That really bothers me as a scientist.

If anyone, including Vrain, wants to know how to tell good science from bad science, junk reviews from quality ones, and legitimate experiments from activist rants, I'm glad to help.  Email anytime.

And thanks to the Houston Museum of Natural Science for standing up for science.  You set a standard and illuminated the need for vigilance in vetting speakers, something that can benefit all places of reputable science.