Many of the folks excited about food labels that indicate ingredients produced by a genetically engineered plants are taking a victory lap. 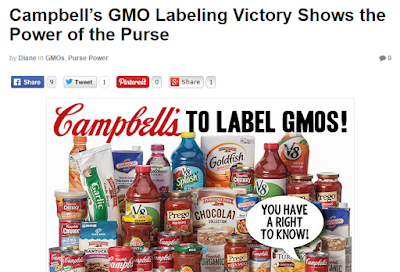 We've seen the tweets about Campbell's decision, and it makes me genuinely curious.  Why are they so excited?  This is not a mandatory label.  This is a voluntary label, something I've always supported, and think is the best solution.

"Partially produced with genetic engineering." I can live with that, which is why I don't think the activists will.


Campbell's is rather brilliant.  They did this for one reason, and that's to do the experiment.

Essentially they must have drawn the short straw at the Grocery Manufacturers of America Secret Conspiracy Meeting and they get to take the first step.  If nothing changes, then the activists were correct, nobody will care, information flows, everyone is happy.

But could this be even something bigger?  I think so.

If HR1599 does not pass (and I don't care either way, it is lots of -negatives if it does) the Senate, then we'll be back to state-by-state labeling initiatives.

But if products are voluntarily labeled, then why do we need state laws?

It forces the hand of the activists.  Once companies are providing that information voluntarily, the consumer has the "right to know" they claim is at the heart of the issue, so there's no need for new regulations!

So then the fight for labels is over.  Solved.

This rather clever move will unveil the true motivations. Activists will continue to call for labels using state ballot initiatives. It will show, clearly, that this is not about a choice, but it is about banning a technology by causing hardship to producers, and driving them to source non-GE ingredients.

It is a curious problem.  How do you get people to boycott something that has been fully compliant in your demands?

We will be watching this situation closely.
at March 15, 2016