What are "Close Ties" to Monsanto? A FAQ.

What exactly are "close ties"?  These claims were make by Keith Kloor in the August Nature article.  The same claims are now reiterated in following articles, without justification, simply based on that initial statement. Of course, I never claimed to have a working relationship with Monsanto, because I don't have one. But let's clarify what this relationship is once and for all.

What are "close ties"?  (Apologies to Keith Kloor, I did originally write this blog with "deep ties" and that's my mistake) Here is the extent of interaction with the Monsanto Corporation:

Are these close, personal or research ties I need to disclose at every research seminar?  You decide.  Tell me in the comments section.


1. Donation to science outreach program that paid no salary or personal funds.  These (relatively small) funds were designed to cover a small projector, facility rental, plane tickets, rental cars/taxi costs, coffee-doughnuts-sandwiches for participants in a science communications workshop.  All funds were moved from the communications program and given to a campus charity. Ultimately no funds were used for Folta's program.

2.  ONE reimbursed travel event.   In 13 years as a professor, the Monsanto company requested that Folta speak to farmers at a single farm event in Colorado.  This is normal and acceptable, but there are no funds to support Folta's travel, so it is customary for the company to pay that amount.  A total of approximately $600 covered hotel, airfare and other costs.  No honorarium or speaker fees were provided.

3.  TWO non-reimbursed visits to the Company.  In 2014 and 2015 Folta was in the St.Louis area and arranged to discuss ideas learned about effective science communication.  He visited at the request of an employee that met Folta at a separate science communications event in May, 2014. No funding was provided for travel. A hotel was provided one night in 2014.  Lunches and dinners were provided, two in 2014, one in 2015. Folta received no speaker fees or honoraria. A company employee paid for coffee in 2015.

4.  Friends in the company. Former students, former colleagues, other scientists keep in contact with Folta and work at this company. This is not uncommon and certainly expected for professionals that work in agricultural sciences.

5.  Hosted Robb Fraley's talk at UF.  Dr. Robb Fraley is Monsanto's Chief Technology Officer, and Folta arranged his visit to UF as part of a series of high-profile visitors associated with ag biotechnology.

6. Email.  Several dozen emails were seized in the FOIA request and are all related to the events above.  These are perhaps 40 total emails of 90,000 total during the FOIA period.

7.  Mints and Lip Balm.  Folta did take complimentary mints and lip balm from the Monsanto booth at a trade show. 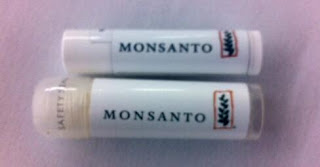 It is difficult to understand how all of this normal, professional, and minor interaction can be interpreted as "close ties".  However, these words continue to emerge in articles concerning the interaction, and falsely portray the relationship, which was simple, professional, collegial, and part of the job of a Land Grant department chair and professor.