As a scientist that has only spoken facts and truths about biotechnology, I have become the enemy of those that want to propagate myth, and scare people away from safe food. I have been active in public education on the topic for 15 years.

In February the US Right to Know organization, backed by funding from the Organic Consumers Association, used public records laws to confiscate 5000 pages of email from me.

When you turn over 5000 pages of email to people that want to harm you, guess what?  They will attempt to harm you.

This is another perfect example of their best smoking gun, a pulled, out-of-context quotation that seeks to frame me as some sort of corporate lackey.  Here it is: 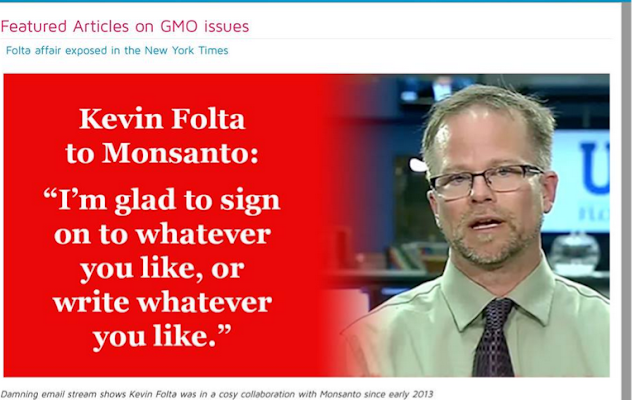 But what does it really say in context?

It starts with a hideous scare commercial that is aired by GMO labeling campaigns in Fall 2014. They show Ray Seidler holding conventional corn seeds along with a handful of untreated seeds.  The associated rhetoric is ominous and scary. The seeds are blue, due to the fungicide and insecticide coating, and are held in a rubber glove. They are described as freaky abominations of science and dangerous to the consumer.

It was an emotional scare piece, and the folks against labeling were planning a response.

I thought the use of fear was deplorable, and unfair. So I was excited to sign on to support any Op-Ed efforts to talk about the scientific truth of the ad. I was glad to see that science-minded people were promoting science, facts and reason and offered support.

This is the letter where they extracted the quotation above. 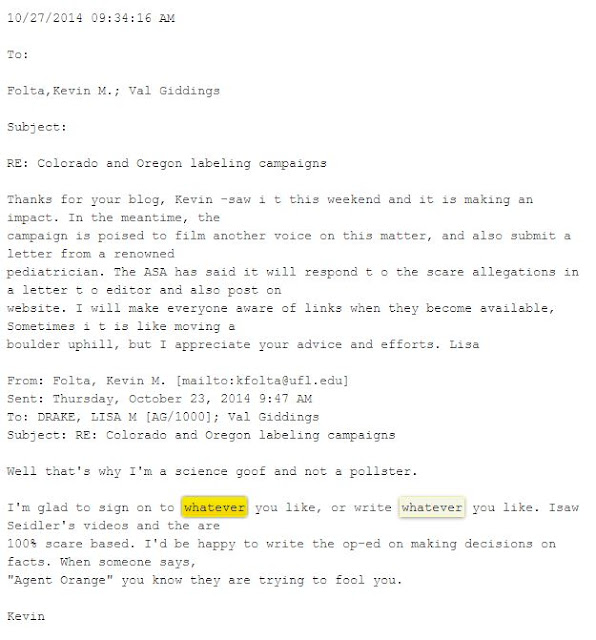 As a scientist, my analysis means something, and it is not uncommon for scientists to support various campaigns or initiatives.  My support for truth and fairness around the labeling issue is welcome and appropriate.

GM Watch and Gary Ruskin have pulled this quotation out of context to harm my reputation and create the perception that I am a lapdog of some company.  However, in context it shows no such thing.

Furthermore, I'm glad to talk to write or speak for anyone that asks. That's my job.  Monsanto is in the vast minority, offering me a few opportunities over the last few years. They do not control my words.

This is a perfect example of the dangers of transparency abuse. Ruskin and others know that single quotations taken out of context can be damaging.  That's why they want the emails, and that is how they will be used.

Will scientists stop talking about these topics?  Absolutely. Who would want their words taken out of context to harm their careers?