Opinion As Fact: When Our Media Loses Its Filter

It is dangerous to scream fire in a crowded theater, when no fire is present.  So why would the Naples Daily News possibly print an inflammatory alarmist story on agricultural biotechnology (in the article referring to “GMOs”) that presented patently false information and opinion, instead of sound science?  The photo below leads the health section of the paper.  It is another familiar attempt to scare a curious public away from perfectly good food. 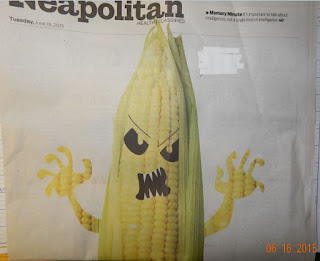 From an activist webite?  Nope!  From the front page of the health section of a Florida newspaper.
Again, the line between science and fiction is crossed, and made to look like investigative journalism.

The words of Kelly Farrell are a veiled advertisement for Jeffrey Smith, a non-scientist that runs a business manufacturing fear around the world’s safest and most highly-regulated food products.  To a public scientist like me, it was a profound disappointment to see such nonsense in a health-associated story.  The information presented is not from journals- it is from websites. There is no inquiry with leading scientists- just opinions from documentarians and others that clearly do not understand science.  The one journal citation presented is based on an opinion article in a low-end journal that espouses an opinion counter to the scientific evidence, the vast scientific consensus and our leading scientific organizations. 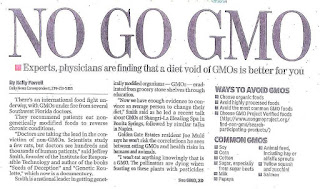 "Experts and physicians"?  Authority-heavy claims without legitimacy decorate the pseudo-news.

Our food supply has never been safer, more abundant, or diverse.  Agricultural biotechnology has been a boon to the 300,000 farmers that elect to use it.  The technology has safely decreased insecticide use, limited tilling, and allowed a switch to low-toxicity herbicides with limited environmental impact.  The technology saved the Hawaiian papaya industry, and stands to rescue millions from malnutrition.

There has not been one single illness, not one, related to these technologies in almost two decades of use. I cringe that the physicians interviewed reject evidence-based science.

The shameful fear-based article in the Naples Daily News is an activist rant, not news or good information. Even in the first tables the author claims that milk and salmon are transgenic, when there are no transgenic cows, and a transgenic salmon (that could be of tremendous benefit) has sadly been in testing and deregulation for over 20 years.

Not only is it not news, it is not true.  Naples Daily News fails to filter out an activist rant that does not even get the fundamentals correct.


If Ms. Farrell can’t get even the basic facts straight and relies on guidance from a profiting author rather than impartial scientists, then why present this as health news?

Worse, how does politically-motivated opinion posing as news affect farmers in our state?  Not far from Naples, orange trees are dying from a disease that recombinant DNA technology may safely fix. Trials are underway now.   Why would we want to limit the farmer's safe toolbox?  This kind of false information is a pathetic excuse for journalism, and it has numerous harms that are easily seen.

I took the time to contact the paper, with a gentle note the editor.  I offered to craft a scientific response and a reflection of the literature as a guest columnist.  I did not even receive a response.

Naples Daily News made a critical error, and screamed fire in a crowded theater, a theater populated with the world’s poor, American farmers, all consumers, and an environment that needs helpful, safe, scientific solutions.