Over the last few years you'll find that a substantial number of my twitter posts are followed by the objections of a certain veterinarian from from Long Beach, CA.  I'm not naming her here because I don't want anyone searching for her professional or business information to find this page. This is an appeal to others to take a high road in dealing with her, and if possible, to not engage with her.

Why is it a problem?

She comments on my blog posts. She slams me on her blog. She systematically checks all of my tweets and chimes in on a large number of them, using fallacy to negate key points. She has dug for, and has broadcasted personal financial information, obtainable because I am a public scientist, then she claims I'm paid by Monsanto and not a public scientist.  She's endlessly tries to tarnish my reputation as an independent voice of science, as an expert in genomics and someone that can faithfully interpret the literature for the general public.

I'm comfortable to make these statements because her words are proudly part of her public persona, placed daily into various venues for all to see. She uses her real name and defends her positions, which is admirable. You can scroll backwards through her timelines and bask in the vitriol. I keep a file of several hundred screen shots of angry and defamatory posts she's made about me and other scientists. 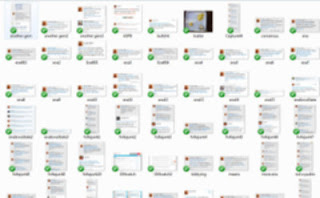 A little sample of the nasty comments I've saved over the years.
I'd rather keep it all private for now.


One side of me would love to post the whole set of screenshots.  I've been told that her comments cross lines and are legally actionable. I've asked her nicely if she could refrain from commenting on just about every post, and that does nothing. It just keeps coming.

Still, I sit on my little treasure of anger nuggets. They really should never see the light of day, but it is an ace in the hole in case she ever starts creeping me out with facts about my wife's business again.

When I visited Long Beach, CA in 2014 I invited her to lunch. It was mega weird, but we ultimately had a nice chat, and it was a positive visit. I toured her clinic and answered all of her questions. My point was a simple one-- to try to build a personal connection with this person that finds it necessary to endlessly chastise me and harm my reputation.  Maybe if she saw a real person, and understood how damaging false claims are to a public scientist's reputation, they might stop.

Even if it doesn't work.

And before you scramble into the bowels of the internet and shove my own words in my face, yes, I know that I have been less-than-cordial on a few occasions.  That's partially why I'm writing this. It hurts me to be like that, and I do tend to apologize when I cross that line. I know how much it hurts, and I understand that it is not how we should treat each other.

Most of all, as stewards of science and purveyors of evidence, we must follow the truth, and do not need to operate like that.

About six months ago I got an email from someone with an attached screencap.  I don't remember what it was, but it was some dirt about her that someone scrounged from somewhere on the web, and he/she was so excited to blow it up in a public forum in an act of retaliation.  True, false, manufactured, whatever, it was not important.  That's not the way to correct this situation.  I suggested that their quest to smear her end immediately, and it did, as far as I'm aware.

I'm glad.  I know what it is like to have people trying to damage my reputation, and I don't wish that on anyone. Even cranky people.

I have a list of people that have tried to get me in hot water at my university. I also have false and defamatory statements made by Dr. Don M. Huber in a certified letter to my superiors.  I have a letter from another sorta-academic that reported a simple misunderstanding right to my boss, complete with legal threats. Ultimately it was a simple explanation, something relatively minor, and I was quick to deliver an appropriate apology.

I know what it is like to have people spread bad information about me and try to harm me professionally.

That said, I'm disappointed in the fact that her business website has now become the target of those that disagree with her about non-business issues.  Her business facebook page has become a wall for an agriculture debate.  I even posted something there about how she treats me, and when I realized it was her business page, I deleted the comments.

If you are reading this and you are disappointed in her approach, please take the high road.  Refrain from angry retaliation in social media- especially in ways that would harm her business or her professional reputation. I have no reason to doubt that she's probably good at what she does, and people that care for animals automatically get points in my book.

The best alternative is to block her from commenting.  I didn't do that because I wanted to monitor what she was saying about me and others.  However, at this point I've blocked her from Twitter, I will not reverse that action.

She has not been blocked from my blogs because I am critical of the blogs that remove my comments.  However, I think a policy change is probably going to happen soon, probably right after she chimes in after this posting about what an asshole I am.

And I did invent, and she inspired, the hashtag #blockthewhackjob, and have used it on her at least a few times.  I'll own that, but I won't use it again.

My request is that we take a high road.  No matter how much it hurts, let's do it.  Don't try to harm her business.  Don't argue with her.

It is disappointing to see where this has gone and I'm sorry for my lapses.  I have to remember that the folks we need to convince are not the people like her.  They are the folks in the middle that are also repulsed by her message and approach.  Why would we adopt that?

Let's let the science do the talking, take the high road, and move forward.  Block, ignore, whatever -- but don't get down to that level.  Let's lead by example.  Who knows, she might be our best future convert.