Celebrating a Failure, That Really Was a Success

Back in 2012, the activist group Take the Flour Back was settled on destroying a science experiment.  The trial was set on an English hillside near Rothamstead Research Institute, rows of wheat specially genetically engineered to produce a natural plant compound (E-beta-farnesene) that faithfully repelled aphids in lab experiments.  Certainly plants protect themselves with natural compounds from insect pests, and engineering in a compound that repels pests but has no effect on humans would be a great innovation. Such approaches have been tremendous environmental successes in corn and cotton.

After pleading on You Tube, scientists convinced the activists to not destroy the crop, and to let the trial progress to completion. Public pressure was palpable, and the to-be vandals saw the potential backlash of their actions.

The trial would proceed, and would-be crop crushers went back to hackeysack and glassblowing.

Turn the clock ahead two years. The data are in, the experiment is over.  The results show that the approach does not produce a significant reduction in aphids in a field setting.

What does the media say? 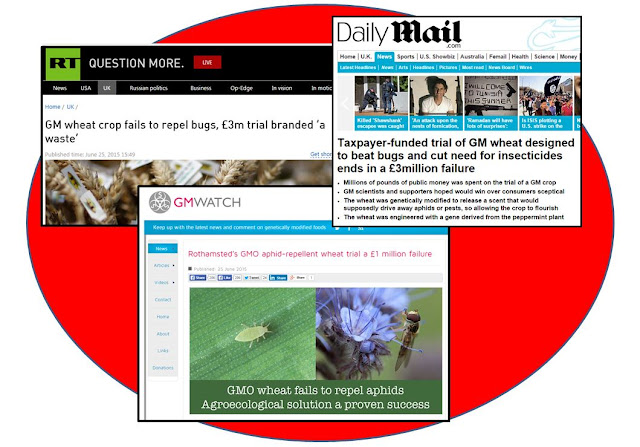 The anti-GMO media empire is dancing in the streets, as a solution to limit insecticides has not provided sufficient data of efficacy.

In these media outlets the trial is called a "failure" and a "waste".  My Twitter feed also erupted with posts rubbing my biotech friendly nose in the outcome of the trials. True to form, it exhibits that these folks know absolutely nothing about how science works. 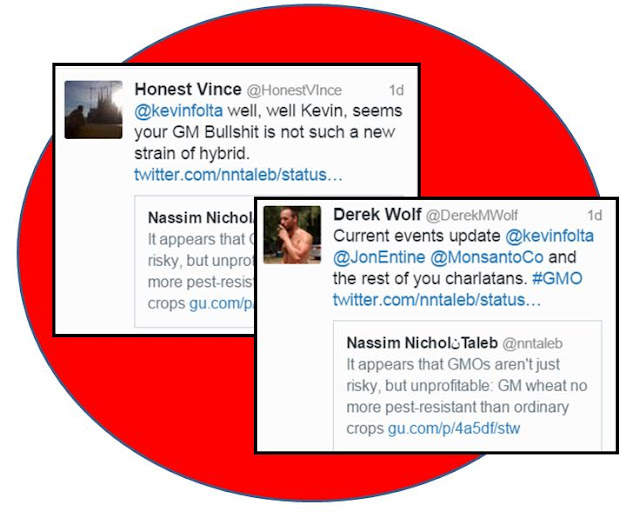 Time to celebrate!  A couple of incoherent caveman rants seem to bask in the excitement that a public test of an insecticide alternative did not produce desired results.

Actually, the experiment was an outstanding success.

Why?  It answered the question.  A hypothesis was tested, and the data did not support it.  That is how science works.  It only is a failure if the data were noisy or the experimental design was bad.  Ask Seralini how that works.

Experimental trails are not failures if the outcomes are reliable.  The only failed experiments are those that are never done, or those that are done poorly so they must be repeated.  A solid answer is a good outcome, even if it does not support the hypothesis. It just means the method needs to improve, or it suffers from insurmountable technical drawbacks.

It could also mean that the complexity of the problem was under thought. That happens to me all the time. In my lab, a surprise negative outcome is a good thing, as it means there's more thinking to be done.

The aphid-resistant wheat is a major win for the research group, as it says that they now need to rethink the approach, that the methods were insufficient to translate what was seen in the lab to a field setting.  That's good to know.

Off to Plan B.

Notice how scientists and activists interpret a negative result.  The writer at Daily Mail referred to Rothamstead's words glossing over the reality.

This is how science works.  We take baby steps, demonstrate that a concept works in the lab, then take it to the field.  Field experiments subject even the best experimental system to a new level of noise and variables, real-life inputs that challenge the models obtained from controlled environment studies.

It was not a failure.  Solid results are solid results, and sadly these did not support a hypothesis that the plant could produce the repellent.

But wait!  I seem to recall the endless screams that experiments just generate fake data and that scientists can't be trusted.  They get the results they want, and that independent research is just a corporate proxy.  Where are those voices now?

Congratulations to the scientists at Rothamstead Research Institute. The experiment turned out to be several experiments in one.  Outside of your original proposal we learned:

1.  That scientists can speak to a concerned public and change the discourse.

2.  That the public needs more help in understanding how science works.

3.  That activists are so set against a technology that a negative outcome by a public lab (not a company) is celebrated, even though the purpose was to limit environmental impact of farming.

I applaud your efforts, and this is one small step for a lab, one giant leap for science. On to Plan B.  Somewhere around Plan F we'll have a solution, but we'll have to go through B, C, D, and E first. Congratulations and thank you for defining the first step.