Some people are truly slimy.  Few things frame the use of fear to attempt to motivate opinion on transgenic crops like the increasing use the phrase "Agent Orange".  It seems that you can't read an anti-GMO opinion lately where the author does not allude to the tragic use of this military agent, now in the contemporary setting of a farm near you!   And of course, they'll tell you it will be in your food.  And in your baby food.  And in your breastmilk.  It is about fear.  Period.

Agent Orange was a collection of herbicides, namely 2,4-D and 2,4,5-T, that were produced by at least sixteen companies during the Vietnam War era.  They were used as defoliants, key weapons to expose an entrenched resistance in a dense jungle.  These compounds are synthetic auxins, a class of plant hormone that inspires rapid cell division and elongation growth.  Essentially, a plant grows itself to death.

The 2,4,5-T preparation was contaminated with a potent dioxin, a chemical directly responsible for the tragic health impacts on soldiers and civilians.

2,4-D has been the most widely used agricultural chemical in the last century. Nobody ever cared or thought twice about it until plants were genetically engineered to resist it-- now it must be villianized.


2,4-D is NOT AGENT ORANGE.  IF SOMEONE SAYS THIS, OR EVEN EVOKES THE TRAGIC USE OF CHEMICAL WARFARE TO INFLUENCE YOU... YOU ARE BEING MANIPULATED.  IF SOMEONE NEEDS TO EXPLOIT A TRAGEDY OF VIETNAM TO PUSH THEIR ACTIVIST AGENDA, TELL THEM IT IS SHAMEFUL, AND STOP LISTENING.

Of course the opinion piece in an Oregon paper doesn't mind going there.  What better term to flip out a state rich with those that believe anything first, and ask science questions never*?  A local physician and a retired EPA scientist sure don't mind using it-- it's scary!

It comes up again and again in the mindless comment stream. 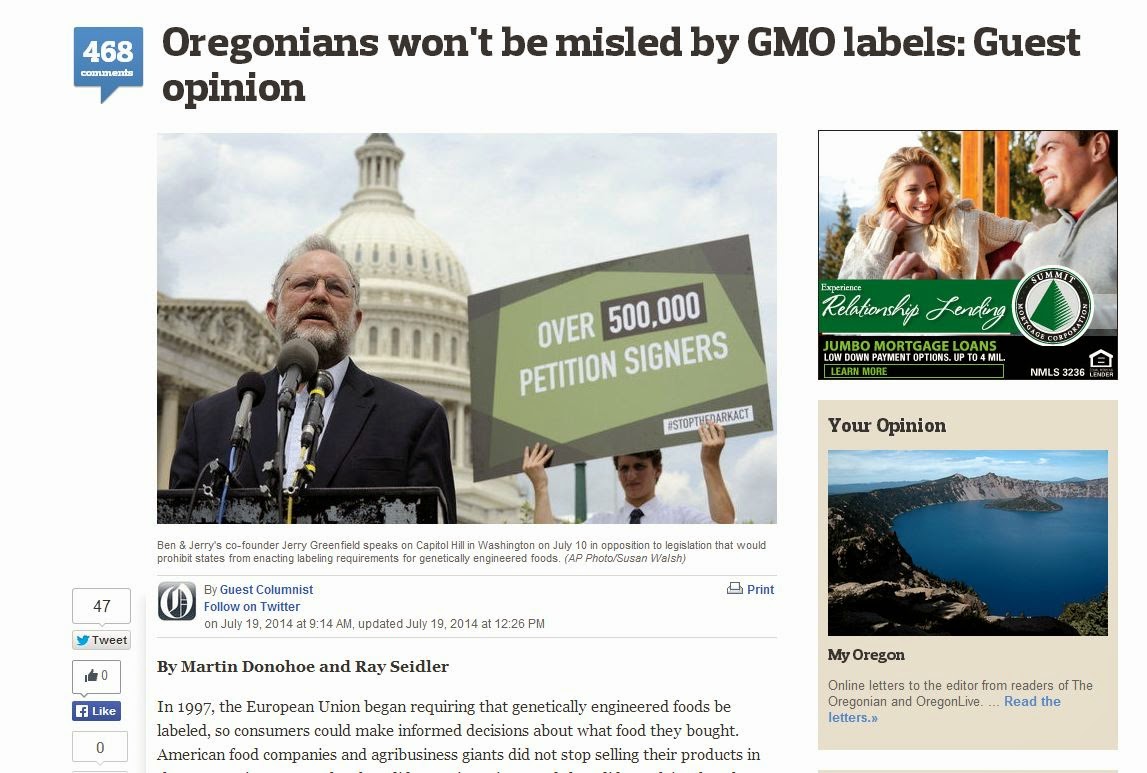 You'd think a physician and a retired EPA scientist could build an argument based on facts rather than fear.  When you've got nothin', play the Agent Orange card.

This is how you know there is no legitimate evidence backing the labeling initiatives.  There is no science, no reason.  There are no data or conclusions.  You can't motivate Joe and Jane Six Pack away from the Kardashians to engage them with scientific information, but you can give them a major-league chemophobic freak out by conjuring up images of an weapon of war, now applied to food.

The minute you read or hear the phrase Agent Orange, know you are being manipulated by false pathos.  Tell them to save the hyperbole.  If they have to scare you to vote for labeling with false associations, then it probably isn't such a hot idea.

*After my original post a received a few comments and emails from proud Oregonians that didn't feel this characterization was appropriate.   After a short exchange with one friend (K.L.- YES YOU) she stated, "The place does have quite a few flakes",  which I think is consistent with what I said.  Not everyone there is goofy, duh.  Some of my favorite thinkers are there at OSU and OU, and a bunch live in Portland just 'cause they love it.  So kudos to Oregon, you've never done me wrong, but in my estimation you're up there with Texas, Florida and Vermont with those that might put belief over science... not quite California, but keep trying!