There is a lot of discussion about glyphosate use and its relative toxicity lately.  For activists, it is an easy target, as it is easy to put glyphosate in the ag input hopper in close association with DDT and other goodies that freak out affluent white people.  You can read on any activist website or comment section that "Roundup Ready seeds are doused in massive amounts of glyphosate- getting this deadly chemical into your body".  Farmer David Walton did a really nice discussion of this over at Genetic Literacy Project recently.

However, I've had this blog entry half done for ages and with the topic coming up over and over again, I thought I'd expand on David's excellent report and provide some more relative numbers, especially with respect to toxicity.

Let's do some math.

-- How much is this massive amount?

-- When is it applied to the crop?

-- How do amounts used translate to toxicity risks?

For soybeans, the application rate is 0.75 lb active ingredient / acre.  I can't work in lbs, mostly because I can't figure out why we don't spell "pounds" as "lounbs".

Speaking metrically, that's 340 g of active ingredient per acre.  That's about the amount of weight/volume in a 12oz (why don't we spell it "ounze" can of soda (or beer; doesn't matter).  That number assumes that glyphosate is about the density of water, which it's not.  It is 1.70 g cubic cm, so that 12 oz can is really about 7 oz big.  That doesn't matter so much.

Now spray that little pop can of active ingredient over an acre. I'll wait. Make sure you have enough to to do the whole thing.

Or we can do the math instead.  An acre is 4047 square m.  That means 83 milligrams per square meter. My 7th grade science teacher Mr. Herzing said, "A milligram is about the weight of an insect wing."

Wow, that seems like not much!  But how much soybeans does that get ya?

To make it relatable to herbicide used, we need to get it down to square meters. That's 291 g soybeans per square meter.

So 83 mg of active ingredient is needed to produce 291 g (0.640 lbs) soybeans.  Of course these numbers assume one application, which is likely not the case, but it still is a tiny amount. 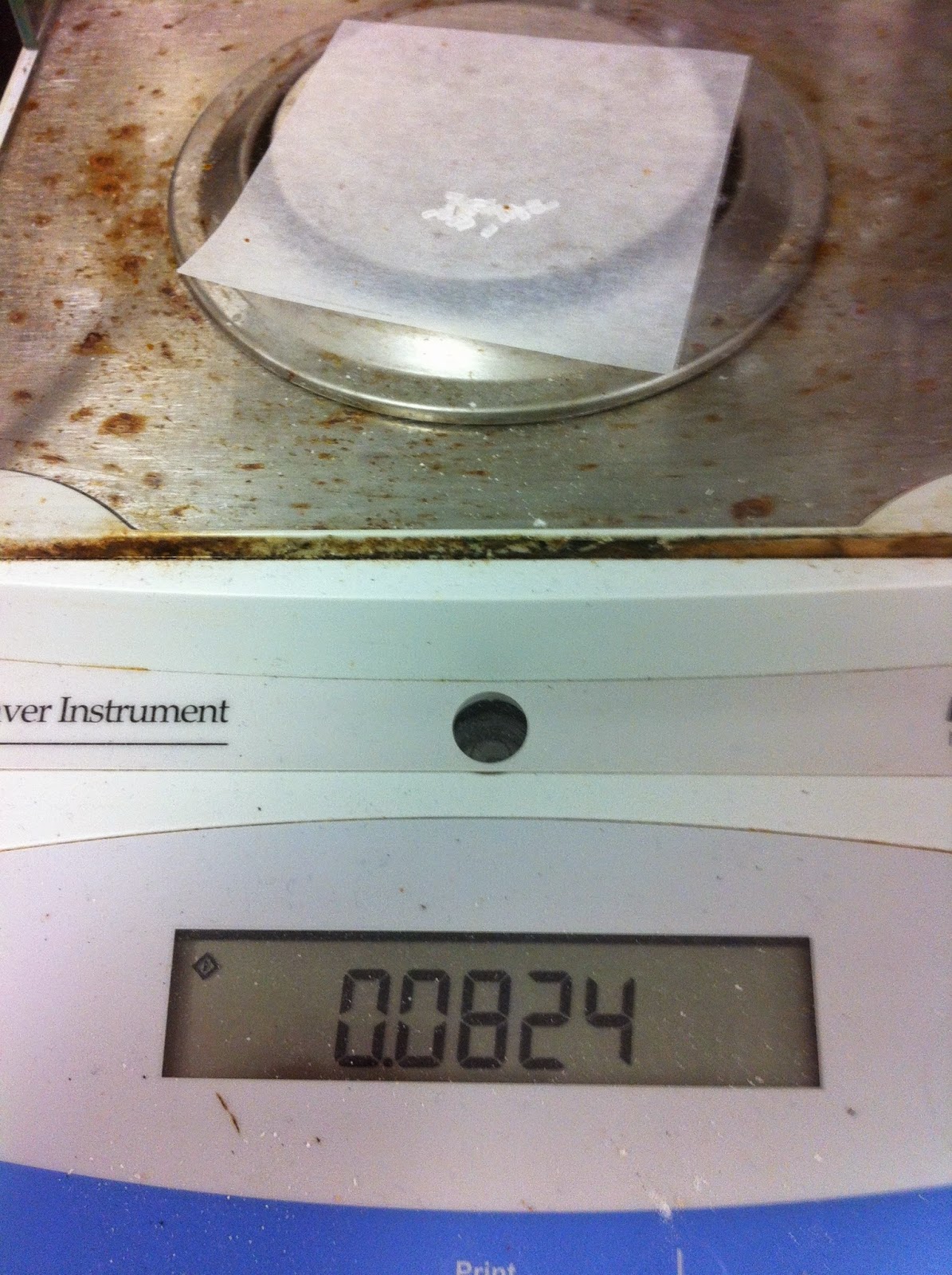 Here is what 83 mg looks like.  Here I weighed out one of the most deadly chemicals currently responsible for chronic health problems in the USA.  That's sucrose.

But glyphosate is not applied when soybeans are on the plant.  There are critical windows when weed suppression is most important. From what I understand this is when plants are smaller than 30 cm tall (one foot), and this critical weed free time is typically 4-6 weeks after planting. Once plants establish they can suppress weeds a bit on their own by shading them out.

Application after the R2 stage is not legal.  That 83 mg per square meter is not being sprayed on food products.

The product also works best if it is not 'wasted' by spraying it on the soybean plants themselves. The targets are the weeds, so most of that 83 mg per square meter is targeted to rows and not to the crop plant.

Glyphosate is typically applied between first trifolate leaf emergence and flowering, before food items are on the crop.


The next kinetic to consider is that glyphosate is degraded, both in the plant and in the soil, so that 83 mg per square meter is going away as soon as it is applied. It is not taken up by roots, so what is not applied to the plant itself goes into the soil and is degraded with a half life of 3-130 days depending on soil type and other factors.

Jeffrey Smith's Institute for Responsible Technology says that it persists for 22 years, which is certainly possible when a half life is 130 days. After 22 years there likely are a few molecules still hanging around at least if the math is right.

The only way it gets into the plant is through foliar application- in other words, if it does not get in through the leaf, it does not get in.  In the plant itself the compound is turned over too, and how much gets in depends on many factors. There's another inconvenient bottleneck to think about.

A prospective study by Roberts et al., 2010 examined cases of self-poisoning with concentrated glyphosate. This is the 41% stuff you buy at the hardware store, then dilute to make a working solution. It is usually applied at about 1%.  In their analysis 27% of people had no symptoms, 60-some % had mild symptoms and in 19 of the 601 cases people actually died.  These folks were older, and had blood concentrations of 734 micrograms/mL. When you do that math, that means that there is 4 grams in the blood (assuming 5 liters) active ingredient.

Holy cats!  Look at the stuff on the scale in the photo above.  Multiply that amount of active ingredient by 48 (4000 mg/83 mg), and then double it (because the solution is 41%) and then inject it... that's what it takes to kill yourself with the concentrate!

If you wanted to do this with the standard application amount, that would be about three liters of Roundup.

USDA numbers show that the highest detectable amounts are typically 20 ppm, but let's roll with 133 ppm.

Sure, lethal doses are not a great benchmark and most people are worried about residues and what effects small amounts can make.  However, 20 ppm, the highest amount allowed by the USDA, diluted in a human where we know how the stuff is broken down and excreted, turns out to be a biologically meaningless amount by all known standards.

And keep in mind that work from Seralni's lab (Richard et al., 2005) shows that placental cells in a dish begin to show problems only approaching 1% glyphosate.  That's one part per hundred, or 10,000 ppm.  That's to kill a flimsy layer of placenta scum in a petri dish!

There you have it.  While opponents of biotech paint glyphosate as a dangerous and deadly compound, drenched in massive amounts onto food-- it really is nothing like that at all.  It is a relatively innocuous compound that is used in small amounts. Farmers use it to control costs, save tilling, fuel and labor.  While not perfect, it is good technology where the benefits far outweigh the risks, that is, if we take the time and do the math.

*** and of course, feel free to check my work and let me know if you find any problems ***