Do Not Stop Adams and Intimidation - Exploit It.

This week, Health Ranger Mike Adams made a thinly-veiled call to recruit anti-GMO activists and the general public to arms.  His goal, mobilize interest to threaten or harm scientists, journalists and others that dare to interpret the scientific literature on transgenic crops and/or communicate it to the public.  The article appeared on Natural News, a page with a readership of over 200,000 a day.  The page was steeped in Nazi imagery, calling supporters of transgenic technology part of the Agricultural Holocaust.

The title of the article is : Biotech genocide, Monsanto collaborators and the Nazi legacy of ‘science’ as justification for murder

I hear that the Nazis have contacted Adams and the owners of the "Monsanto Collaborators" website.  The Nazis feel that Adams and anti-GMO are negative weight on their reputation.

Stay hot, Dork Ranger.  Of course, he now has shown that he's seriously off his rocker and willing to command his army of the brain dead to harm those that don't capitulate to their level of stupid.

TODAY!!!!  Imagine my joy when I find this!  A new page constructed that follows Adam's direction to establish a page of "Monsanto Collaborators", people with no formal collaboration to Monsanto, but people that communicate and/or do research on transgenic technology.  Right now the "scientist" section is not populated, but I'm hoping to be on that list! 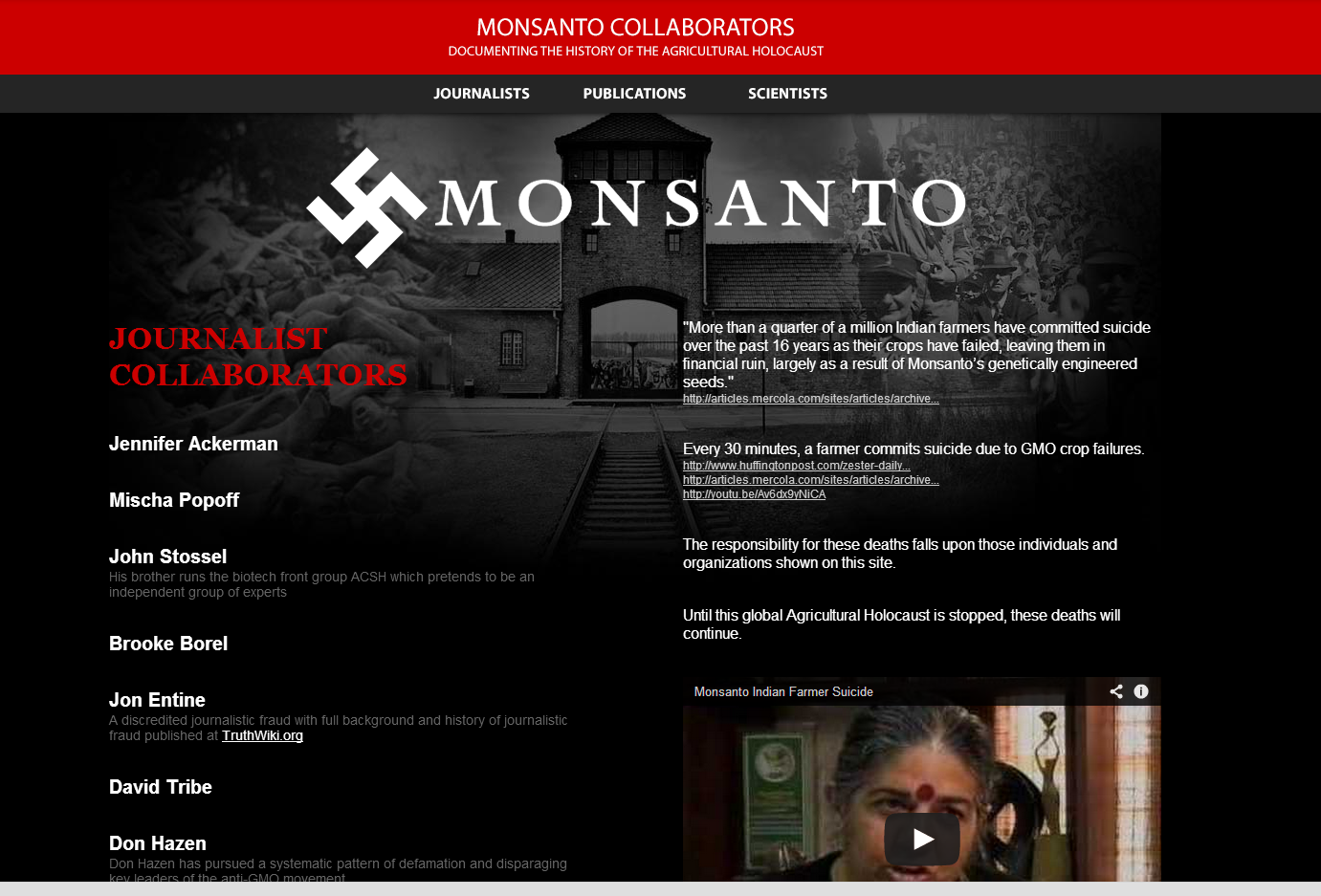 Now they have moved to intimidation phase.  When you don't have facts, evidence or data, use a swastika. This will backfire.  Let him leave it up there as long as possible.

Keith Kloor addresses this whole thing quite well today, so no sense in being redundant.   The question now is, what should we do now?

ABSOLUTELY NOTHING.   In fact, we should use this as a badge of honor, put this in every website, public talk, twitter article, whatever it takes.  DO NOT CALL TO TAKE IT DOWN.

It means we are making a difference.

This journalist/scientist= Nazi angle will absolutely backfire.  Remember, the people that need communication and convincing are not the crazies on  the edge, they are the people in the fat of the bell curve.  They don't know one way or the other, so they choose based on fear rather than logic.

My appeal is to scientists, journalists and the public, especially those named on this list, to let it ride!   Take screen shots, use it far in wide, put it in every seminar, website and blog entry.  Adams says what most of them just think.   His stupid filter doesn't stop at just writing nonsense, he's actually spewing it like a fire hydrant.

This kind of imagery will end the labeling discussion dead in its tracks.  Adams calls for harm to scientists and journalists, but has done irreparable harm to his own cause.

I'm calling this one a victory.