A mantra of the anti-GMO movement is that they want independent research, from neutral sources devoid of  special interest.

That is, until it is their special interest.

The Moms Across America "stunning corn" is old news here. In short, anti-GMO websites everywhere showed that GM corn was full of formaldehyde and had no nutrients. The data presented were so fake that anyone with half a brain could see right through it.  They were soil data, and likely faked soil data. 'Moms' promoted, and rabidly defended, fake results as authentic. Still do.

When I questioned them on their websites I was banned, blocked and then criticized.

Last week on Mae-Wan Ho's website I offered to personally pay for a replicate of the experiment.  I was greeted by a kind email from Dr. Ho, and clear indication that Howard Vlieger and Dr. Don Huber (the goofy one, not Don J. Huber) were on board for the new test.

I was excited to say the least.  They clearly were ready to move forward, or they thought they were calling my bluff.  I'm a scientist, not an activist, so I don't have time for bluffing.  Forward we go!

Now I've opened the conversation and I'm surprised they are playing along.  Dr. Maewan Ho has been always accommodating and pleasant.  Could we actually do a real test?  I'm actually starting to think that we'll get somewhere!  No contact from Vlieger on the specifics we need to replicate the test.

YES!  Here we go!  I'm actually really pleased that there's some movement in a common direction.  Maybe they really did get those data and there was a mixup at the lab-- they were being honest.  Maybe those were real data and corn is poison...  I can't fathom that, but it is in the spectrum of possibilities I guess.  The re-test will tell.  This is great!

Let's now put everyone on the hook...  we're all accountable!

This is really coming together!  Ebony and Ivory!  Water and oil!  Union and Confederates!  Kum-by-effin-ya!


I asked Zen Honeycutt and Kathleen Hallal from 'Moms Across America" to please contribute.  I asked them to feel free to shape the next experiments, and offered them authorship on the work.  I wish I could access the old Facebook posts, but they are beyond my history's reach.  Hallal said that nobody ever claimed the results to be real, and that is just bullshit. I did have a note I sent to Honeycutt, so far unanswered.  Of course, she'll never offer to be part of the work.  Her flimsy organization has too much to lose.

Of course, not reply from Zen or Kathleen.  The light of science, the independent verification they want, causes the science-less cockroach fear promoters to scurry for shelter.


Of course, they are on the spot now.  It is time to do the independent, multiple location, replicated, statistically correct test-- they say scientists never do.  Let's do it!


And then, the black helicopters hover......

This is where they have to back out, because they know that independent tests will expose their fraud, or at least their support of a mistake or data someone else faked.  I do not believe it is a mistake, because if they were real data, they would be eager to replicate with independent scientists.

In the meantime Anastasia Bodnar sources some maize analytical labs we we're getting loads of input on this website about numbers of replicates and experimental design. Unfortunately, none of this comes from those supporting the data.  From Moms Across America's Kathleen Halall, she tells me that they are willing to do the experiment, but I can't be part of it because it has to be an independent scientist... of course, I'm as independent as they come.  Plus, all of this is transparent!

But you guessed it, they are retreating.

I demanded transparency, independent replicates, multiple sites and labs!  Now they are backing out!

I'm a little disappointed because I thought we were getting somewhere.  My reply: 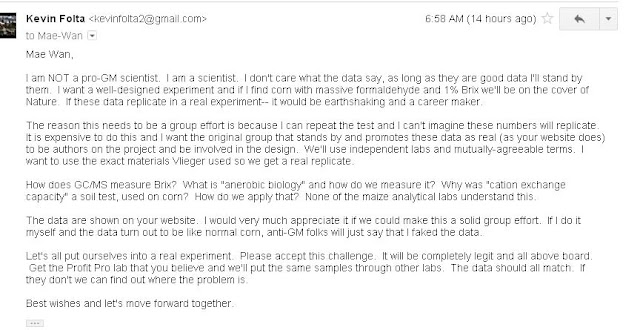 And one last time to salvage that Kum-by-ya... 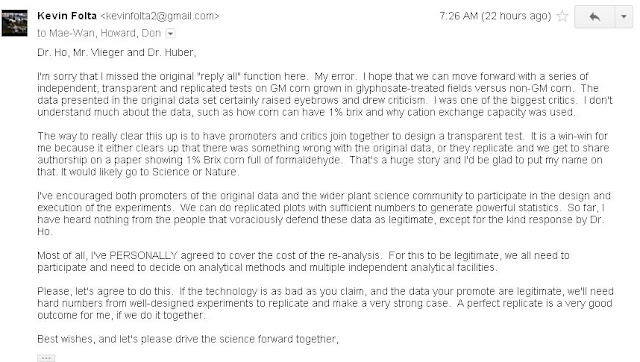 I know, I"m such a monster.

And this is where it stands.  I was never contacted by Vlieger of Huber, and marching moms were just pointy, mean and nonconstructive, true to form.

If you are someone that understands and accepts the evidence that biotechnology is a safe and useful tool, again the critics have been silenced.

If you are someone that is anti-GMO, if you feel this is dangerous, most of all if you are afraid of those corn data-- then you need to seriously think about who is representing you.  You need to see how they operate, how they are fakes and will not stand by the data they promote!

If you hate GMOs, hate Monsanto, hate biotechnology-- STAND WITH ME and DEMAND that MOMS AGAINST AMERICA, Dr. MAEWAN HO, and others that promote this fake corn data either REPEAT THE TEST INDEPENDENTLY with GREAT RIGOR or TAKE DOWN THEIR BOGUS WEBSITES AND ADMIT THE DATA ARE FALSE.

They'll never do it. They are not big enough people to admit it and their house of anti-science cards depends on it perpetually scaring people, even if it means promoting data that don't match biology, and they don't want replicated.

I've done my part to promote science and reason.  This shows what cowardly stewards of misinformation they are.  I'm maintaining my offer and stand by to do this test.