Yesterday I wrote about a website I found HERE and could not believe my eyes.  It was a picture of Himalayan Sea Salt, VERIFIED GMO-Free!   I wrote a little something about this and its insanity.

I decided to follow up on this curious stuff.  Himalayan Sea Salt.  GMO-Free. Going forward, when I mention "salt" we're talking table salt. Table salt is one simple molecule, a sodium and a chloride locked together in ionic bliss.  In our typical table salt they add a pinch of goiter-busting iodine and calcium silicate to prevent caking. Other than that, pretty simple stuff.

I know I'm risking being called a shill for big salt, but here goes...

So I go online and the first thing that pops up is Mercola's website- he loves not good old sodium chloride, but Himalayan Salt, over 250,000,000 years old, so it claims. 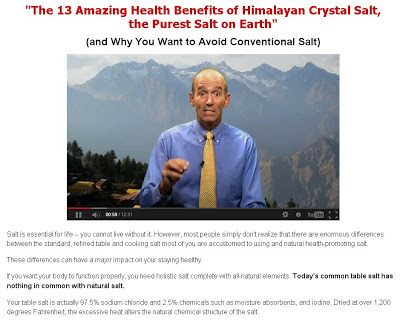 Dr. Mercola must have slept through chemistry class. Click on this to read the words of a true anti-scholar.  Plus, people that refer to themselves as "Dr. _______" all the time drive me nuts.


First, the "Purest Salt on Earth".  What a great claim.  The purest salt on earth is the reagent grade sodium chloride on my lab shelf.  Mercola claims that table salt has nothing in common with natural salt, and that "heat alters the natural chemical structure of (table) salt".

Altering sodium chloride's natural chemical structure is pretty difficult to do.  Aside from dropping it in water and dissociating it into ions, the stuff together, dry and happy, is simply sodium chloride.

Turns out that Himalayan Sea Salt (which if it actually comes from the Himalayas is about as far as you can get from the sea) is loaded with all kinds of fun elements.  Over at Salt News (no kidding) they did a spectral analysis of Himalayan Sea Salt.  No GMOs, but plenty of things that would get spark an activist frenzy if they were present in Monsanto corn.  The laundry list of evil elements present is long, and there are detectable levels of lead, arsenic, plutonium, radium, uranium,  and the list goes on and on.  They also refer to "tungsten" as "wolfram", which explains the "W".  The list is shown after the end of this posting.

The analysis says 97.5% good ol' sodium chloride, at least as I can back calculate from these numbers. Keep in mind Mercola's note above, "Today's common table salt has nothing in common with natural salt", which is exactly true, if you ignore the fact that they are both 97.5% sodium chloride. Plus, using "common" twice in his sentence is confusing. He needs a better proofreader, but they'd probably correct his loony science too.

Now I know damn well that the vanishingly small amounts of these elements are probably present in many food items.  No argument there.  They are there at levels that are undeniably physiologically irrelevant.

The point is, if such chemical analysis was done on corn you'd read about how GM corn contains lead, arsenic, plutonium and uranium. It would be posted on every anti-GM website and it would be the obvious link between GM and disease.  Correlations are the mainstay of anti-GM "evidence".

The ironic part is that 1 in 10 deaths in the USA are blamed on salt, 2.3 million deaths a year worldwide. That's exactly 2.3 million more than GMOs, as transgenic plants have killed 0.0.  Salt consumption is linked clearly to high blood pressure and is a contributing factor in stroke and cardiovascular disease.

Ultimately, that ear of corn is not nearly the poison that the big pink rocks of Himalayan salt are.

However, they do taste delicious together when used in prescribed amounts.


Here are the data from Salt News.  No other source is provided, so take them with a grain of salt. 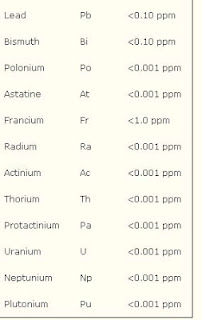