Last week the interwebs reverberated in shock over news that a student had been expelled from school for conducting a science experiment. I was shocked too, certainly I've been extremely active in science fairs, elementary school science education and fostering the adoption of STEM disciplines by minorities and young women.  This is an outrage!

Until you read the details.  I don't know why the world has rushed to her defense.  To me, this is entirely different than a science experiment gone bad, as it is described in the press. 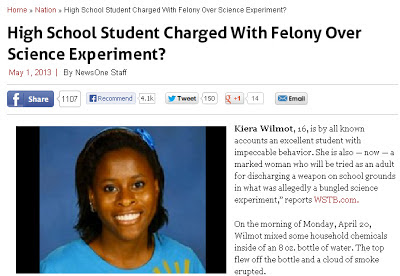 I contend that she was curious and put a caustic chemical into a container with a catalyst and it exploded.  That's not an experiment.

Of course, her parents have lawyered-up, the public is in a state of outrage and many are screaming for justice.  I just have a few questions for all of them about Kiera's experiment:

The answer to all of these questions is, there is no answer!

What should have happened?  She should have admitted to making the device, apologized, discussed why it was wrong and then been suspended for a day.  The school/state should have dropped any criminal charges, as this was clearly not the intent.

When I was in high school we did lots of experiments. I did the nitrous oxide inhaling experiment and that landed me a suspension. My parents didn't lawyer up and the suspension didn't cause public outrage. Instead, I was grounded, had to talk to counselors, etc.

In Keira's story, details are slim, but based on the information provided it is clear that this was not an experiment.  Maybe that will change, but for now, it was a sharp kid that made a bad decision that broke the rules, and got caught.  Now is being told that she's an innocent victim, she did nothing wrong, and her behavior was acceptable.

Friday May 10 should be declared Keira Wilmot Science Solidarity Day. I suggest that all kids, in nationwide support of Keira, perform the same science 'experiment' at their schools.    I'll buy the Drain-O!  Let's see how consistent public outrage is when 30 kids show up to each school with a bottle full of caustic drain cleaner that will explode.

A discussion with Keira's lawyer pretty much eludes to the fact that her parents will sue the school district and probably the State of Florida.  The attorney says, "It will work out very well for Keira".

Here a lawyer and some parents will turn their kid's bad decision into a lottery ticket.  Maybe she didn't mean to make a bomb, but she should have admitted to doing something wrong, shown some contrition, and agreed not to do this again.

Instead she'll show that by playing the victim and whining for public approval can pay for college.  That was the real experiment, and the data suggest that it just might work.