Blocked from Commenting- for Exposing Facts

Last week I pointed out that some data pitched as the dangers of GM corn were actually not from corn, but from soil itself. I found the root of the problem on Moms Across America a website desiring to stoke fear of biotechnology-- even if it means lying to readers and silencing critics that dare to talk science. 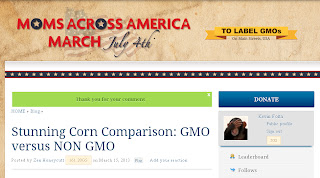 To recap, they posted a table of data allegedly comparing GM to non-GM corn.  The whole story is here. The conclusion from their side is that GM corn contains more zinc and copper than carbon and is loaded with glyphosate and formaldehyde.  My conclusion was that they were fooled with soil data, which is obviously the case.

When I called out the bogus information the followers of the site immediately jumped to diffuse-and-attack mode.  The comments below show this beautifully.  Not only do they try to link me to Big Corporate Ag (predictably), they also move the goalpost--   since they have been caught red handed either lying or spreading bad information unknowingly... the focus changes from the food, to the soil.  Typical.

I'm even reminded hat I'm not a soil scientist.  It is all about tearing me down, not supporting their information and providing a source or additional evidence about this magic GMO high-zinc corn.

In the same passage  I was criticized by others on that site, again connected to  Monsanto (this time because I did a video for Biofortified.org and they were apparently noted by Monsanto as a good source of biotech information (talk about six degrees of Monsanto separation!)).  You can read it all in the comments section of the website, or in a nugget like this one: 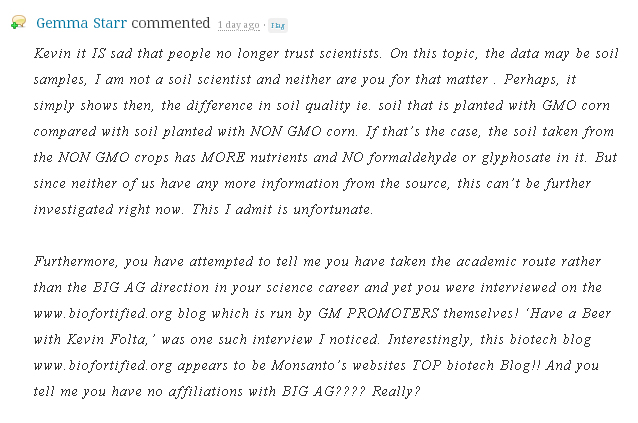 Gemma tells me of my close affiliation with Monsanto.  Wow!  I'm almost president of the company!


Then my comments were removed, censored, because science does not mesh with their delusion.

Unfortunately I didn't get screen caps of my comments, but they all have been removed.  You can tell where they were by reading the comments section. 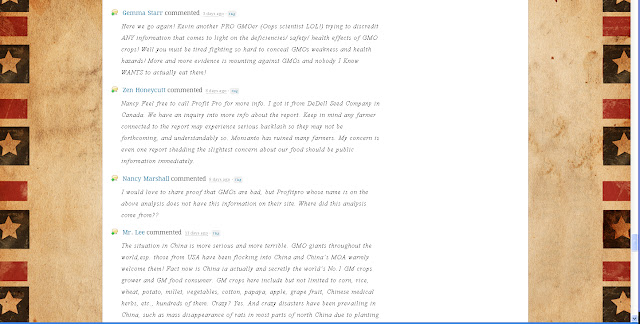 You can see here in Gemma Starr's comments that she really respects scientists. She was responding to my gentle and kind educational comments meant to guide and teach.  Glad she can "LOL" at the people that speak from science-based evidence.


Censored.  Nice job Moms Across America.  You are absolutely the crappiest moms I can imagine-- insulate people, including children, from the truth you find inconvenient to your cause.  Shame on you.  Teach your children to think critically and understand reality from fantasy.  That's the best gift you can give them.

THE BEST PART is that the woman at Moms Across America was happy to put a lame and rambling (borderline insane) comment on this Illumination blog.  Talk about internet balls!  Distills facts from her website that I present, but then wants her insanity represented on a scientific site!

I'm happy to leave her comments on my site.  She makes my point impeccably.


Here's what you get from Moms Across America:

--Publication of a bogus report, or at least misrepresentation of real data

-- A desire to be heard on a reciprocal platform.  Good Ol' Zen Honeycutt wants to be heard here on Illumination, but my comments are no allowed on Moms Across America!   They want to give the illusion of a debate on my site, but a "no room for other thoughts" approach on theirs.


-- ULTIMATELY, they censor a scientist providing helpful guidance because it does not support their inconvenient interpretations and threatens their religion of "science/scientists=liars"

To those on the fence on this issue, this behavior should be extremely telling.

The insanity continues.  Soil data are shown as corn nutritional data and the credulous keep on believing it, defending it, and teaching it to a new generation of suckers.  Just more work for me and the world's thousands of independent, academic scientists to clean up later.