Hang It Up Stacy

In 2015 the anti-science, scientist slander machine called US-RTK provided my emails and a story to New York Times reporter Eric Lipton.  As stated by Lipton on the 9/17/2015 Kojo Nnamdi Show on NPR, (USRTK leader) "Gary Ruskin handed me a story and wanted me to publish it."

The result was a gross misrepresentation of me and my motivations to teach science. To them, it was all part of a corporate cabal to misinform the public in exchange for grant money.

Time has shown that none of it was true.  Still the story lives on the internet, forever attached to me in a Google search.

And folks from USRTK keep it alive and well.  Last week Stacy Malkan, a USRTK henchtwit, continued to post links to the Lipton story, at least to the documents that supported it, plucked from their context for easy re-interpretation. 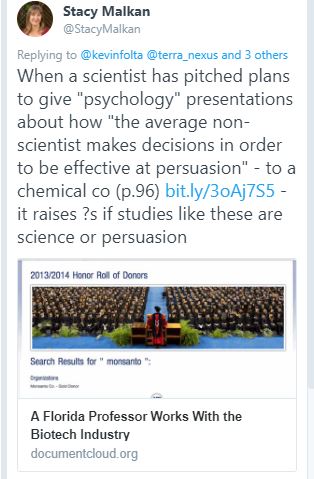 Yes, that's what I do.  I talk to folks about communication, which has a significant component of psychology.  How do people process information?  What mistakes do they make?  How can we earn trust?  These are the things I teach.
And as the article states,  "A Florida Professor Works With the Biotech Industry" they neglect to note that this is our job.  We are to be public liaisons with industry. That's part of the Morrill Act of 1862 that established the Land Grant University System. It is to take the knowledge generated and apply it to agriculture, which includes the ag-associated industries.
Lipton and USRTK neglect to note that 95% of my research funding comes from federal and state sources. The industry funding for research came from the Florida Strawberry and vertical farm industries. In 2017 I hired a postdoc for one year on Bayer funds ($57,000 to hire a Ph.D. scientist for one year with benefits) to work on novel molecule discovery, which is one thing my lab does.
Here's the Point
Over the last several years it is no secret that USRTK has lost relevance.  You can't slander scientists and attack science for years and not expect folk to catch on eventually.

Their recent attacks on Dr. Peter Dadzyk brought them sharp rebuke by social media, and their website visits plummeted.

Traffic ain't so hot over at USRTK. While the world tolerated their hate directed at scientists for years, the anti-COVID19 science work has flattened their curve.  Source.
At the Same Time...

While I'm not speaking at conferences as much and have been living through the other hassles of hard defamation, things are going generally very well.  Research is fun, teaching is going great, and I'm investing time in other community leadership efforts. All good. 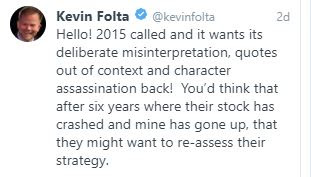 When you are a hate group that targets scientists the world will catch up, and you will lose relevance.  When you do good work that grows with time, you gain relevance.

Why do they beat a tired old story from 2015 that they created?  It got them what they wanted at the time, but in the rear view mirror of time it is clear that it was a targeted hit piece that ultimately proved to be bullshit.

And their defamation page on me is alive and well.  My students visit it and laugh.  They know me, and that's not me.

In a world of important problems, why not focus energy and time on solving them?  What dig the heels into defamation of public scientists working for the good of others?

It is a failed formula.  Stacy doesn't get that. Maybe she will when USRTK is out of business.  Coming soon.