Over the last week the trolls are back, and polluting social media with more anti-Folta nonsense.

I won't even touch on it.  Nobody has looked at it, nobody really cares.  It gets few likes, retweets, etc., and those that do show some love to the filth are in the defamation network.  It's dead.

But sadly I need to always play defense.  Now that these allegations are forever placed in findable space, I must reluctantly respond. I teach students, I work with kids, I lead community initiatives, and when someone claims that I'm issuing "threats" I unfortunately have to provide my perspective.

First, Carey Gillam.  She tweeted this, this week: 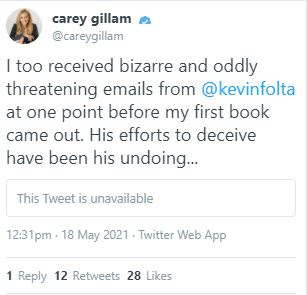 Carey is one of very few people on my "do not Heimlich" list.  She is one person that I believe is truly evil, and takes pleasure in harming others.  When I begged her to leave my family out of some online slander, she doubled down and went after someone very close to me.  I appealed to her as a mother and a human being to please just stop-- but she dialed it up.  She is a monster.

Over the last decade she has trashed my work, made false claims about me and my motivations, and has been generally horrible.  She is paid by USRTK, the organization sponsored by industry to  endlessly harass me, so she gets a paycheck to post defamation like the above.  That's her job.

If she had "bizarre and oddly threatening emails" from me she would have posted them, or paraded them around the internet.
And if I would have made threats, they would have been very much deserved.
Threat Capacity
I'm not one to make threats.  I'm a diplomat.  We work things out. However, I am one to describe the constellation of outcomes if a given path is taken.  Big difference. By talking about "here's what happens if..." is an important point for me to present to others.
I make no threats, and nothing I say could ever be remotely construed as a personal threat-- like physical harm or unfair retribution.  I don't have that gear.  Frankly, I wish the trolls would leave me alone, and I ignore them for the most part.
Where It Started
This week a story emerged online about how Karl Haro Von Mogel claimed that I threatened him in a 39-page psycho complaint to my University's Dean for Teaching.
Think about this.  If someone were to threaten you in a non-work related context, legitimately, would you run crying to their employer?
Karl does this because he knows that there are no legitimate threats from an ethical or legal perspective, and people that know me, and know him, understand that I don't operate that way.  They see what he has done to cause me personal and professional harm, along with stark personal betrayal, and understand that I probably am justified in feeling a little prickly towards him. I just ignored him until his wild complaint package surfaced.
But universities are extremely risk averse and must take all claims very seriously.  That means universities can be exploited to do your dirty work, and trash the reputation of your target academic from within their institution.
At the same time my University Administration knows me better than anyone, and also knows the praise I receive for good work in teaching, service, research and outreach. They know a troll when they smell one.
The other major problem here is that the alleged threats were not communicated through a university email account or in my role as a professor at the university.  I was a private citizen protecting my privacy and reputation, and discussions with Karl were personal and through non-work channels. Now von Mogel took it upon himself to drag in my employer and make his claims public, making my personal, private emails public without my knowledge or permission, or the courtesy a carbon copy.  Shame.
He produced an email from me that contained this excerpt, interpreting it as a threat:

At the time, my personal property and files were being distributed to the internet, including the ever-hostile GM Watch for malicious and incorrect re-interpretation. I wanted to know how that material was getting out of my home and file cabinet, and I suspected he may be part of that pipeline. I already knew that he broke my confidentiality on some highly-sensitive work I was doing with a law firm and was meddling in my divorce by providing false statements to my ex-wife's attorney.

I simply told him, we can discuss this privately, or make it public, you pick.  That's not a threat. This is me kindly offering to work it out together privately, rather than having it blow up publicly and have to explain it, like is happening here.  I don't want to wreck the guy's future like he wants to wreck mine.

Keep in mind that this was several years ago. I just learned of this complaint last week (5/2021) when it went public, and if it didn't go internet-wide I would never have said anything publicly. They guy has enough problems and could still sort it out and be a good contributor.
But to accuse me of threats is something I must directly address.
He continues:

If it is false, then we can talk about it and sort it out.  It was his refusal to discuss this important issue, and my need to get to the bottom of it that prompted my response.  It was not "social blackmail", as proven by the fact that he did not discuss it with me and I kept quiet-- I never made it public until now, when his complaint became public.
The next "double down" on "threats" was:

This was after Karl reported me to a professional conference for violating the Code of Conduct, simply because I requested a meeting with him on how we were going to complete a project that was crowdfunded with >$13,000 of public money, where he dropped the ball and my name was attached to it.  I had every right to be angry, and I wasn't.  I just wanted to formulate a plan out of the mess, together.
My reputation was on the line and I wanted a resolution. I either wanted a plan forward or was going to disconnect from the work very publicly in an act of self-preservation.
Luckily he kicked me off of the project, along with lots of other people that did the analysis on my end, and did so very publicly, so I didn't have to do anything.
Is it a Threat?
The point is simple. These are not threats-- these are IF/THEN statements where I spelled out our options to completing a project or resolving a difference. I always was gracious in offering to do things the easy way first, and avoiding escalation that does nobody any good.
That statement is shown to be true with time, as I did not receive a satisfactory solution that I asked for, and still never took the situation public.  I didn't want to affect his career and possibilities like he wanted to do to me.  I just let it disappear.
Until now.  If the 39-page complaint didn't surface, then I would not have to state my explanation of the  situation.  He knows about FOIA and public records requests, he used that system anonymously to gather confidential documents of mine and distribute them.  He absolutely knew that he was planting a seed that would be discovered later and play a critical role in his malicious targeting.
Again
If you have questions, ask me.  The situation is super unfortunate and my guess is that the other parties involved wish they had a do-over.  It makes them look amazingly sad and petty.  Rather than accepting an invitation in a private email (these were from my personal account, not subject to FOIA, and had nothing to do with university business) to resolve a difference with me personally, they run to conferences and my university administration and claim "threats".

And now this long-forgotten annoyance has become very public, not by me, I'm busy working and teaching science.
And I want to keep doing that.  These kinds of accusations do nothing to help me teach others as they are designed to harm my reputation.

Which means I now need to work even harder at producing good media and better outreach. Good.  I needed a little fire to refocus my efforts in positive ways.
I hope he finds his.