This is a sad epitaph, parting words to an old friend that is now gone, leaving in a puff of bitter betrayal.

When I was a kid it was common for my mom to buy me a magazine if I was sick and home from school.  I didn't want MAD Magazine or comic books.  I preferred Scientific American.

The once stalwart publication held a unique spot at the science-public interface, bringing us interesting and diverse stories of scientific interest, long before the internet made such content instantly accessible.  It was our trusted pipeline to the new edges of scientific discovery, from the mantle of the earth to the reaches of space, and every critter in between.

But like so much of our trusted traditional science media, Scientific American has traded its credibility for the glitz of post-truth non-scientific beliefs and the profits of clickbait.  The problem is that when a trusted source publishes false information (or worse, when it hijacked by activists) it destroys trust in science, trust in scientists, and in the case presented here, destroys trust in American agriculture.

The following article was published on August 20, 2019. The authors are Louise Elizabeth Maher-Johnson and Ayana Elizabeth Johnson. The work has drawn strong criticism from others.  A semi-complete line-by-line refutation of claims presented is presented here. While the entire article is filled with egregious errors, I have highlighted several doozies below.

1.    First, the clickbait title. Fail.  Broccoli production is just fine, with new varieties grown in expanding acreage. Corn is not toxic.  The microbiome, a collection of microbes in a given environment, has become the darling of credulous movements, as their known complexity can be manipulated to fit non-scientific conclusions. That is what we are seeing here.

2.    The first paragraph cites a food author, not peer-reviewed research, stating that food is “literally… poison.”  This is a profound slap in the face of the farmers that produce the safest food in human history.

3.    They cite Planetary Health, a website that presents the hypothesis that  "Ebola originated in modern agriculture and food practices..." and while they say there's no evidence for it yet, they certainly are looking for evidence to support that concept.  The website promotes remedies for Ebola based on a smoothie made from fermented plums, soy sauce and kudzu.

4.    The next paragraph claims that food has lost between “10 and 100 percent” of nutrients, a common claim. It is based on the fact that modern breeding of crops has made them larger, yield better and face less disease. That means higher fresh weight that dilutes nutrients.  Others have corrected for water differences and show slight decreases, but note it is a trade off for size and yield (Davis et al., 2004).  Others have analyzed cost and show that calories and nutrients per unit cost have improved (Darmon et al., 2005).  In short, there are many comparisons in this area, and all are limited by the veracity of old data. Today we have unprecedented access to more diverse food, through more of the year, that costs less, that is safer, than at any time in history.

5.    “Not only are plants getting less nutritious, they are getting more toxic.” The authors present this argument without reference.  In reality there is clear evidence that the use of genetic engineering decreases crop damage and less toxicity due to lower levels of mycotoxins (eg. Bakan et al., 2002), fungal compounds with strong associations with cancers.

6.    2,4-D is not “similar to dioxins and Agent Orange”, it is an herbicide, a synthetic version of the plant hormone auxin that causes rapid growth and distorted gene expression in plants. Agent Orange was used as a military defoliant in Operation Ranch Hand in Southeast Asia. It was contaminated with dioxins from the synthesis of 2,4,5-T, another synthetic auxin that is no longer used.

7.    The claim that glyphosate (the active ingredient in Roundup and a chemical used in weeding genetically engineered fields) is in “air [and] rainwater” comes from a study by and Battaglin et al., (2014).  Battaglin detects glyphosate and its breakdown products in surface water and rain, but in vanishingly small amounts. The work by Majewski et al, (2014) detects glyphosate in air samples at 26 ng per square meter, and immediately adjacent to a cotton field where it is used.  The authors of the Scientific American article imply that this compound is present everywhere and in dangerous levels. It frames the deceptive nature of this article. 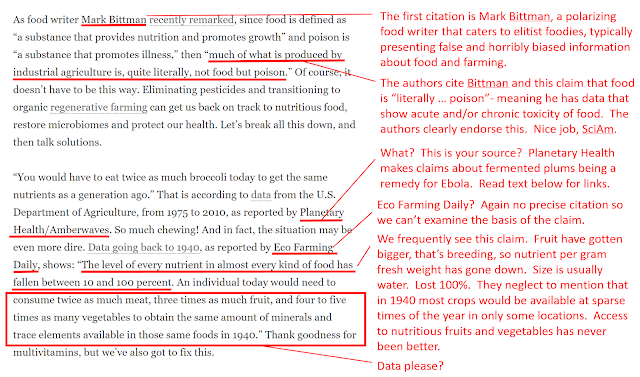 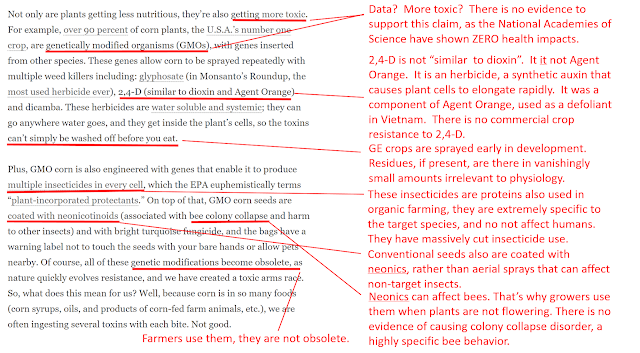 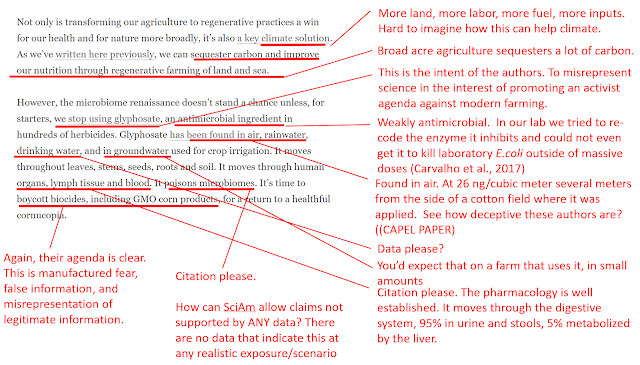 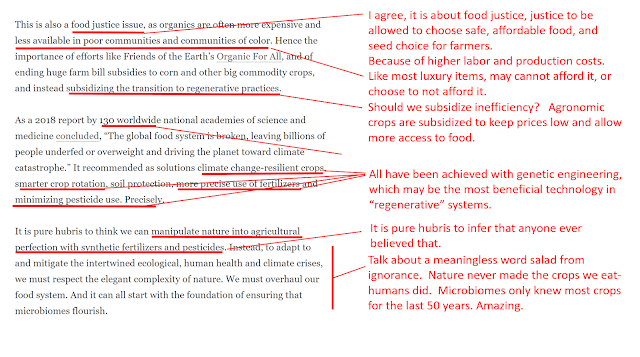 This is yet another example of how our scientific literature is being distorted by predatory publishers and the predatory nature of motivated authors looking to promote non-scientific information as legitimate science. Maybe they’ll publish that vaccines cause autism next.

This kind of journalism destroys trust in agriculture, food, and science in general.  The type of false information presented has a well-established home in Netflix documentaries and on the pages of anti-farming, anti-scientist websites, not the child of the Springer-Nature Publishing Group, and the flagship periodical for science connections to the general public.

In these times where new discoveries happen every day we need to demand the highest standards of our legitimate scientific brands.  Scientific American was just used by misguided activists that seek to destroy the food system and revert to a non-existent model that is not sustainable.  Scientists, farmers, and anyone that likes to eat needs to stand firmly against efforts to commandeer our trusted brands for promoting non-scientific ideas.

Stop here. Swallow your coffee or you'll spit it at the computer screen when you see the cover of the September 2019 edition. 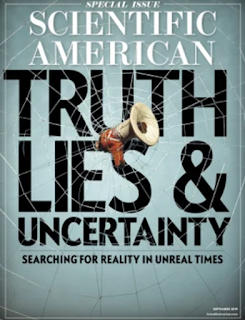 B. Bakan,*, D. Melcion,D. Richard-Molard, and, and B. Cahagnier  Fungal Growth and Fusarium Mycotoxin Content in Isogenic Traditional Maize and Genetically Modified Maize Grown in France and Spain  Journal of Agricultural and Food Chemistry 2002 50 (4), 728-731