I hate like hell giving screen-time to Paul Thacker.  He has shown a persistent mission to hassle me, dig endlessly through my emails and other records, and then construct kook conspiracy theories and false associations.

Today is his latest installment is his proof that I am not an independent scientist, and just a paid industry hack like him.  He shared this today on Twitter.  His goal?  To erode trust in a public, independent academic scientist with a strong record of public service-- because I'm changing hearts and minds about science.  That must be stopped. 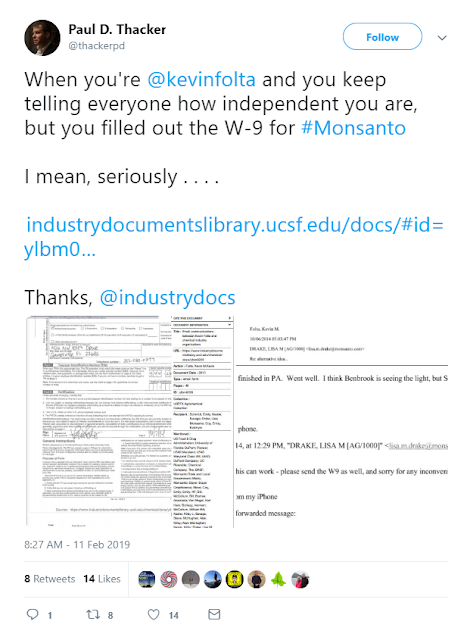 Paul posted this today.  Glad I unblocked him.
And nice of him to publish a document with my social security number, address and phone number fully visible.

Sometime in mid 2014 I received a phone call from Lisa Drake, someone I never met before.  She worked in Colorado and had a role in customer contact, etc for Monsanto.  She said that farmers in the area were getting a lot of questions about the crops they were growing and they wanted answers.

But the farmers didn't want answers from a company, they wanted it from an independent source.  So she called me to see if I could do it, September 16, 2014 at a Harvest Tour and Dinner Event, near Longmont, CO.

No problem.  Glad to.  Well one problem.  No money.  I don't have a fund that allows me to buy plane tickets, etc. to speak to such audiences, at least I didn't at the time.

So I asked Lisa if she could cover the exact costs of my travel.  No honorarium,  just hotel (cheap), airfare (coach), parking for my car in Gainesville, meals (cheap ones) and a rental car to get to the event (+gas).

I made the trip, had a great time with the farmers, mostly sugar beet and corn growers using publicly-held land in Boulder County.  It was a wonderful trip I'll never forget, and I made some great contacts that are now good friends. 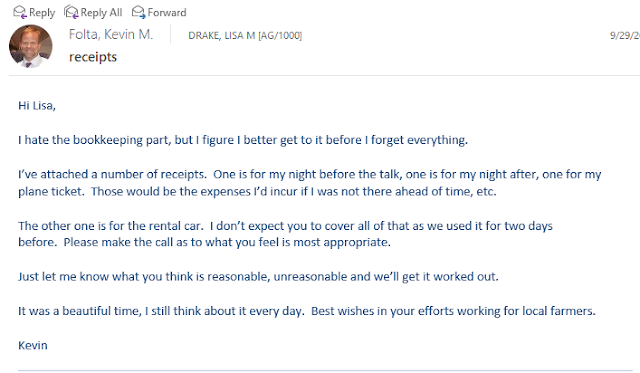 I requested reimbursement, and was kind of nice about it.  I used the rental car the day before to go see a friend in Ft. Collins, so I didn't think they had to cover that.

After I submitted my receipts, they needed a W9 to be able to process my reimbursement.  This is standard in corporate accounting apparently and it sucks.  They send me a check as a payment for expenses, yet it counts as income.  Later when I do my taxes I have to again show all the receipts to offset this "income".

This is all pretty standard tax law.  I signed and submitted the W9, shown in Thacker's Twitter post above.  Here's a bigger copy. 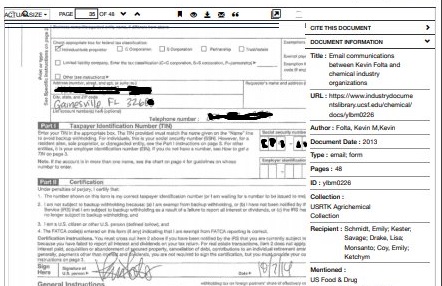 Here is the W9 submitted after my receipts.  Note the date (10/7/2014) and note the address.  These are important later. NOTE- THE REDACTIONS OF SOCIAL SECURITY NUMBER, PHONE NUMBER and ADDRESS ARE MINE. THACKER POSTED THEM IN THEIR ORIGINAL FORM.

All was complete and they could process my reimbursement.

Here is the copy of the reimbursement check receipt.  This was in my private records in my old home and my ex-wife shared it with GM Watch in 2018, claiming it was an under-the-table payment. Like Thacker, she doesn't like me either.  Ironically, I had to pull it off of the GM Watch website, as I don't have this anymore. 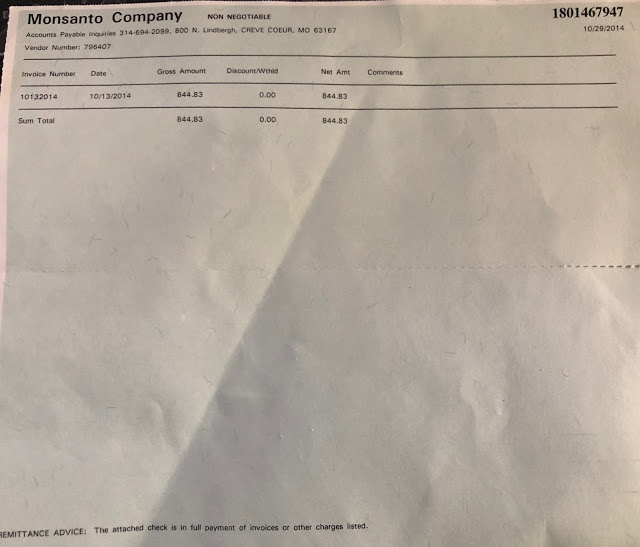 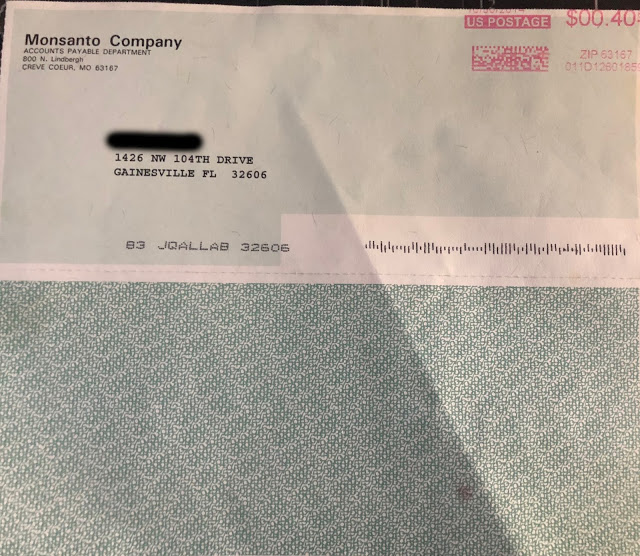 Here is the check receipt from my records (I didn't black out the name, not sure why the ex did), the exact costs of travel reimbursed and delivered to my home address.

Why not to the university?  I could do this work on a university credit card and get reimbursed from the company, through the university.  However, that adds a level of time/expense, and it means I need to turn in receipts within 24 hours of incurring a charge, something I can't always do, especially from the road. I pay the expenses, submit receipts, receive reimbursement. That's it.

Here is why this is important.
Paul Thacker and University of San Francisco's Industry Documents Library seek to harm the credibility of scientists they don't like by cherry picking and skewed presentation of information. It is part of their attack on on science, much like that done to disparage climate scientists.

The documents reveal reimbursement for costs incurred when I spoke to farmers about technology.  It was on my time, and I received no compensation.

It is his purposeful distortion of an event that was public information, fully disclosed, and receipts visible on demand.

This is transparency weaponized to raise questions about the integrity of a scientist, sharing science.

Is Paul Thacker someone you trust?  Is this kind of reprehensible conduct acceptable to you?

It is just another day in the life of scientists that teach science, and the barriers we have to fight to do it in a hostile atmosphere when hate meets social media.