It has been well established that the activist group US-RTK advances it agenda by using public records requests to obtain emails from public academic scientists at great taxpayer expense.  They then selectively pass stories along to willing (lazy) journalists that see an easy story and a quick paycheck if they publish the story that US-RTK wants told.

We've seen it several times already.  Thacker and Seife wrote a story about me that was false and retracted.  The New York Times and Eric Lipton wrote a damaging, libelous piece about me that time has shown holds minimal truth. Other stories are written by people on the USRTK payroll, posing as unbiased reporters.

All of these stories started with USRTK passing along the emails to journalists. Journalists failed to do their own homework, instead, ironically doing the bidding of a well-financed activist group. Some did the homework but decided to perpetuate falsehoods.  Still others saw through the attack and would not comply with RTK, maintaining their integrity and standards.

Sadly, some journalists are used and manipulated, drawn by the allure of an apparently sexy story and a few shekels, not actually thinking about the content or the people that could be affected. Sometimes it is so poorly done that it reflects an abject abortion of journalistic standards.

Let's look at the piece by Alex Orlov on Food.Mic.

"Leaked email" ???  Leaked? You mean, emails freely provided through public records requests at significant taxpayer cost?  This is the level of disingenuous rhetoric that Orlov uses to frame this article.

The article is about Registered Dietitian Mary Lee Chin, a professional that is really interested in communicating concepts around food risk and safety to other dietitians.  I've seen her in action a few times now.  She's small in stature but fills the room, always deliberate and articulate, dressed perfectly and always hyper-professional. Here words flow with a catchy slowness, delivered with unending poise and strength. She captivates an audience and provides beautiful analogies about food, food safety and risk. She freely acknowledges her associations with a number of organizations, including Monsanto.

When I read this article I was pretty sad. Mary Lee is a kind person I always like to watch perform. I learn from watching her teach others about food and food safety.

But Alex Orlov is the next victim of US-RTK, a credulous journalist that accepted the emails from these corporate-financed activists, and then followed the RTK narrative to the letter without a whole lot of other critical evaluation.

The article claims that "leaked emails" show Mary Lee and Monsanto fail to disclose their relationship, and implies that her discussion of dietary concepts cannot be trusted because of this top-secret link. But if you look at the graphic below, you can see that the paragraph contains a link to "Monsanto's site" where Chin is mentioned as one of their consulting RD's. 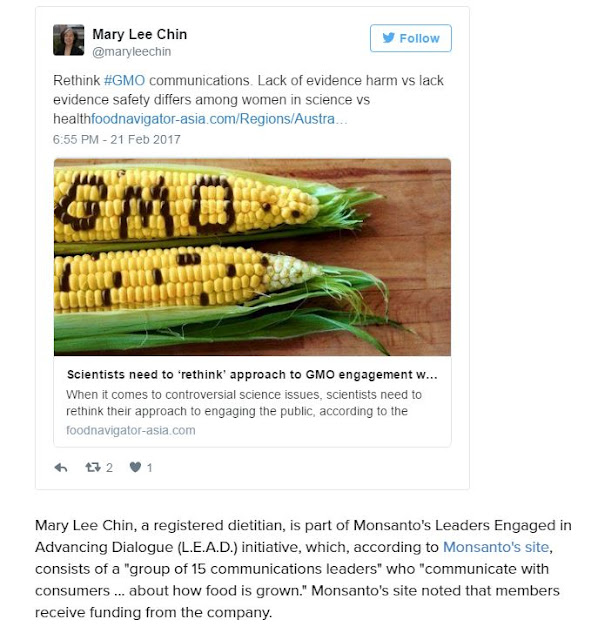 That's some top-notch journalism. Including a link in the article that freely discloses the information that is claimed to not be disclosed.  D'oh.

This is the best part.

Mic "obtained" emails.  You mean, US-RTK sent emails and a story to tell?

Wait a minute... the next paragraph...

Ahhhh, there it is!  USRTK "shared" (e.g. provided the emails and a story to tell) to Mic after obtaining them to the University of Florida in 2014.

No, US-RTK got these from me last week and promptly packaged them for willing dupes to communicate.  That's 2017.  They needed someone to do their work, and Alex Orlov fell for it. They didn't make the records request in 2014.  Their endless harassment of professors at public expense started in 2015 and continues to this day. They got another 15,000 pages from me last week, including this one. That's some solid journalism there.

Ultimately the thing Orlov fails to show is that Mary Lee Chin said something, or did something that was wrong.  What rules were broken?  What did she say that was inconsistent with the scientific evidence and vast consensus? 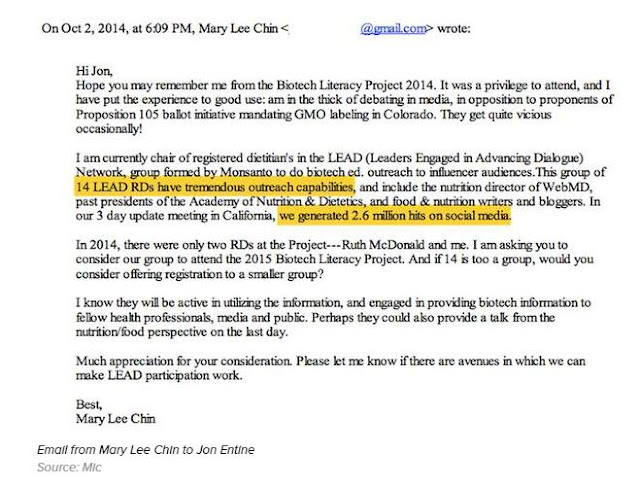 A dietitian excited to leverage her training to teach others and have impacts!  For shame! Full disclosure-- Source is US-RTK, not Mic.

I'm sad because this goes after Mary Lee.  At the same time I'm sad because this hurts Alex Orlov.  She joins a group of victims, journalists duped by an activist organization with a mountain of industry funding and a handful of well-cherry-picked emails. She's also a victim because she did their bidding-- and it is dead wrong.

So add her name to those that scientists should not trust, in the same hopper as Infowars' Alex Jones, Natural News' Mike Adams, Eric Lipton, Alison Vuchnich, Brooke Borel, US-RTK's own Carey Gillam, Thacker and Charles Seife and the other "journalists" that do the bidding of activists instead of telling the truth. Time has shown them to be wrong, and that trend will only continue.

The trend will continue until journalists stop being the mouthpieces of activist organizations, trading their integrity for a paycheck and a website that dies in an irrelevant echo chamber.

There is an irony here that is so incredible that it gives me an ice cream headache.

Journalists, if someone comes to you with a hot-story of a scumbag scientist working for Monsanto, look at it carefully and follow up with the scientists targeted.

Most of all journalists, are you the shill selling out for a paycheck? Are you telling the truth?  How you decide to parrot RTK's claims will dictate your journalistic legacy. And sadly, they have shown that they are interested in destroying scientists, even if that means destroying the careers of a few journalists along the way.

**This work is uncharacteristically angry and direct.  However, as someone that has survived this type of assault on my reputation, I feel an obligation to stand up for others enduring similar persecution.  This is how I stand up for science.