(This is long, but don't miss the punch line)

I was speaking with a reporter and she asked me about the February-March 2017 "pesticide and GMO report" from the United Nations. She told me that it basically said that pesticides are killing mountains of people and that GE crops were a problem.  I think she was reading from a website that took this angle.

I had no idea, but I asked her to send me the report and I'd provide a synthesis. She kindly did that.

The report is actually by the U.N. Human Rights Council, a special report on the "right to food".  That's a good thing-- right? 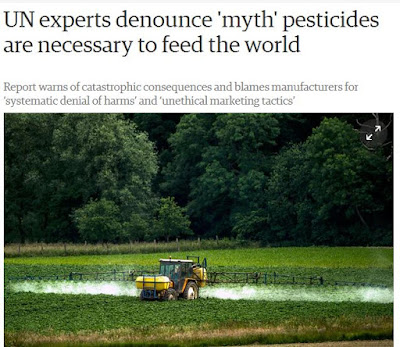 U.N. Experts (all two of them, both attorneys with no evidence of scientific or agricultural training) present their opinions, yet it is reported as a United Nations Report.


Actually it is a thinly-veiled promotion of agroecological methods to produce all food, trashing conventional agriculture as "industrial farming".  It does so by focusing on the downside of pesticides (pesticides = insecticides + herbicides + fungicides).

Pesticides are a great wedge. Those that oppose the companies that make seeds hate any chemistry that can help food be produced on a large scale.  Farmers don't want to spend money on pesticides. Consumers are scared to death of them, even minor residues, because of activist websites and fear-mongering strategies.


Everybody agrees that agricultural chemistry must be used responsibly, emphasizing safety to applicators and consumers, and sensitivity to the environment.


I called it right from the beginning.  This would be a document loaded with examples from the developing world, a place where the poorest people farm to eek out a daily living, perhaps selling or trading a portion of their crop.  The crop they raise is extremely valuable-- it separates their family from absolute hardship. Therefore, many take radical measures to protect it.

I once spoke to a farmer from Nigeria. He said, "Why don't farmers have their families just pick off the bugs and move them somewhere else?"

That is what he does.  He has no chemical controls.  His family walks the fields and manually kills bugs they find on the plants.

But others have chemistry at their disposal, and they use it liberally without good personal protection equipment.  The brinjal (eggplant) in Bangladesh requires 80-120 sprays per season to protect it from the fruit and shoot borer.  Farmers rely on old-school pesticides like organophosphates and carbamates, and apply the chemicals with backpack sprayers and little/no protective equipment.  The eggplants they produce have a visible layer of insecticide on them.

This practice ended with the introduction of the genetically engineered brinjal, which cut sprays to 1-2/year.

Parts of the world overdo it on chemistry-- because it works and it is what separates life from death.

The problem is that it creates a human and environmental disaster.  That is the point of the first part of the report.  They cite 200,000 acute poisoning deaths, 99% in the developing world.  They note that these are places where safety has not caught up with application. I agree.

But then the authors of the document present an argument from ignorance.  They continually claim that we just don't know the effects on humans and our ecosystems and therefore should adopt the Precautionary Principle and agroecological methods of farming.  That is the general gist of the rest of the piece.

The paper then discusses incidents of poisonings, one of which is when in 1999, twenty-four children died after drinking parathion (a highly toxic organophosphate) because it was confused for powdered milk.  I don't know why this is evidence against chemicals used in agriculture.  It is evidence against use of agricultural chemicals in the diet.

The paper continues to talk about how those applying the chemicals are often child laborers, and that all applicants have insufficient personal protective equipment.

We already know that's not good.

However, the report has now tarnished the lay reader with the conclusion that chemicals are evil.  They then move on to #27 in their list, consumers.  They talk about cocktails of chemicals, systemic pesticides that are internal to the plant, and their presence in water.

They attempt to connect a hazard to an exposure. That's called manufactured risk.

Ecological risks are represented by a few limited examples and statistics that are truly noteworthy-- no problem there.

Then it tuns to neonics, and it gets the science wrong. It even states, "Neonicotinoids are accused of being responsible for 'colony collapse disorder' of bees worldwide."

Yes, they are being accused of that-- by people that don't understand what is happening with bees.  Colony Collapse Disorder has not even been observed in years, yet bee declines continue, and most science points to varroa mite. It has been credibly suggsted that neonics could have a role in decreasing bee resistance to mite problems in some cases. But that has yet to be shown definitively, and farmers have adjusted practices with neonics in the last decade to minimize pollinator exposure.

Look at the citations throughout- lots of blogs, not a lot of peer review. One of their sources is Friends of the Earth Europe. There is an unbiased interpretations of science #NOT. 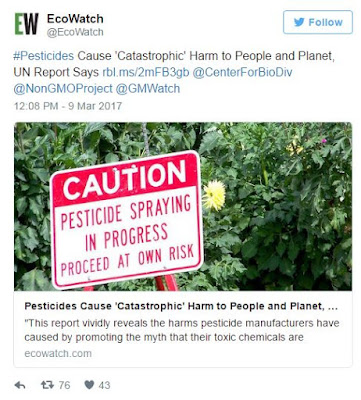 This science-free U.N. Report, by two attorneys, provided red meat for organizations like Eco Watch to manufacture more fear.  Read this tweet. Does the data presented in that report justify this alarm?  No. Not at all.


Number 37 goes to genetic engineering (GMO).  The paragraph retreats to an argument from ignorance, claiming that we just have no idea and that we need to study it further. Why don't scientists feel that way?  They also say there is controversy around Bt, but I've never heard it. Organic growers use it all the time.

They then go on to cite the IARC conclusion of glyphosate as a "probable carcinogen" and fail to cite the dozens of other evaluations by independent federal organizations worldwide that show there is no credible evidence connecting glyphosate to cancer.

They then then urge the precautionary principle based on the "probable grave effects on health and the environment".

No citation provided. Because there is not one that supports that conclusion.

The next part of the report is stuff about law, then the next part confirms my earlier beliefs-- more statements are made about children being the primary users of ag chemicals, without personal protective equipment, using old-school chemicals, and applying too much.

Next, and most offensively, the report states that "there are serious claims of scientists being "bought" to restate industry talking points" and other tired arguments that only erode trust in scientists that make honest, independent assessments that are counter to activist beliefs.

The next part is the reveal-- SECTION V. Alternative to extensive use of pesticides: agroecology.

Now I see the authors' motivations.

I hate the precautionary principle. It is elitist. It assumes that the poor share the affluent policy maker's tolerance for risk.

The article also states, "The most effective, long-term method to reduce exposure to these toxic chemicals is to move away from industrial agriculture."

If anything, the arguments presented show why human rights and safety require a move to MORE industrialized agriculture. The egregious and unacceptable examples they present of how humans are harmed by pesticide use almost exclusively occur in the developing world.  Over exposure, harm to the environment-- these are NOT happening on large farms in the industrialized world.  Misuse mostly occurs on small holder operations in the developing world. They are not bound by regulation and personal protections.  There is no industry, no oversight, no government control.  Those aspects come with industrialization as we saw in this nation, and continue to see as regulations grow and adapt based on evidence.

Of course, everyone wants to use fewer agricultural inputs, and what is being learned in studies of agroecology are valuable, and could inform those advances. But continued innovation in plant breeding to bring new genetics, supplemented with a little help from genetic engineering, new production practices and improved insect and weed management will be critical to making these adjustments.  We'll also see new chemistries with more specificity and fewer environmental impacts.

Such documents have great influence and credibility. This document must have been assembled by a team of diverse scholars with great breath of interest and expertise in the subject area.

The author was Hilal Elver, the U.N. Special Rapporteur on the Right to Food.  She holds a J.D. and Ph.D. in Law and was trained in Ankra and in the USA at UCLA.   She has no clear training in food, farming or associated technologies, so it explains why the work was so poorly cited and disconnected from scientific evidence. You can read her philosophies here, and it explains a lot why her opinions shaped content of this report.

The other author is Baskut Tuncak, a Washington attorney, now serving as the U.N. Special Rapporteur on Toxics.  He heads this a group at the U.N. that focuses on toxic chemicals in the environment and has a great focus on childhood exposure, etc. That's great.  Ideas presented on the associated website are the same as just about every scientist's, and my own.

Two attorneys cite the Monsanto Tribunal as a legitimate source of information.  How do !!!!!!******TWO ATTORNEYS****!!!!! not realize that this was a fake trial?  They actually cite a  contrived, non-binding, activist-driven trial!

The problem is Elver and Tuncak's proposed road map to limit harm. They wish to eliminate the use of safe and effective tools that help people have food, nutrition and quality of life worldwide, and resort to old concepts long replaced.

I'm guessing that neither of these attorneys have worked on a farm or raised their own fruits and veggies.

As a scholarly document the U.N. Report lacks in many ways, mostly in its horrible citations.

But look at the rhetorical setup, which is quite disingenuous, perhaps a product of having attorneys spin the flow.   They:

1.  Present real evidence of pesticide harms which are rampant in the developing world.
2.  Discuss presence in food, but fail to address quantity present, which are far below physiological relevance.
3.  Disparage genetic engineering technologies with no evidence.
4.  Claim scientists are just bought off and all industry is crooked.
5.  Present alternatives that are impractical for the majority of farmers.


Bottom line-- The U.N. Special Report on the right to food is a highly motivated opinion, poorly cited and with numerous claims not supported by evidence and not consistent with the scholarly literature and the scientific consensus.