In the ongoing war on glyphosate, Carey Gillam posted a link on Twitter highlighting a newly-published article.  The article comes from a team of Brazilian scientists that fed developing male rats massive amounts of soymilk, and then massive amounts of soy milk spiked with gigantic doses of herbicide (not just glyphosate).  They then analyzed factors potentially related to reproductive toxicity.

Did they really see it?  What did it take for it to be seen?  When people draw conclusions without actually reading the papers, the interpretations can be deceptive.

The referenced work is Nardi et al. 2017. The paper seems a little odd out of the box.  As a scientist, I don't know the rationale of pounding animals with massive doses of chemistry just to see what happens. It almost seems a little like it was done to secure the headline that Gillam and others seek.


To make this relevant, I'm ~100 kg. To achieve the amounts used in this this experiment I'd have to drink a liter of soy milk and just under a half-cup of herbicide a day, for 35 days.


There is minimal mention of the copious literature on soy products as endocrine disruptors, which is well established. Here's a good review. Here animals are basically fed a potent dose of plant-based estrogens and then hit with lots of herbicide. I'd be surprised if they didn't observe something!

The Introduction talks about soy milk a bit, and the whole second paragraph is about glyphosate and how awful it is.  They cite papers from Seralini (insert grain of salt here) and some from authors on the current author team.  This is interesting, because in the intro they write:

First, "innumerous"?  The dictionary says that this means "incapable of being counted" and that must mean that the authors are not capable of counting them. However, they can be counted. There are many papers that show interaction with hormone-based processes, but typically at high levels or within cells in a dish.  These are important studies because they lay the groundwork for toxicity assessments, and in general show that the cells don't like to be bathed in herbicides, including the soapy chemicals in the formulation.

They imply that effects have been observed at relevant levels, yet the paper they cite does not reinforce this interpretation. Dallegrage et al 2007 say:


Dams were treated orally with water or 50, 150 or 450 mg/kg glyphosate during pregnancy (21-23 days) and lactation (21 days). These doses do not correspond to human exposure levels

So they are putting in a half a gram per kg body weight in some cases.  That's 50 grams (about ten nickles) of pure glyphosate every day for 35 days.  Hmmm. They do not cite any of the many reports that show no effect on endocrine processes, such as this one.

The animals were fed 10 ml/kg a day of soy milk, or soy milk containing 50 or 100 mg/kg (ppm) glyphosate as Roundup.  Not glyphosate.  The complete herbicide.  You can buy reagent-grade glyphosate, my lab does all the time. Not sure why they didn't do that.

To make this relevant, I'm ~100 kg. In this experiment I'd have to drink a liter of soy milk a day, and just under a half-cup of herbicide, for 23 days.  I would guess that my dude parts might not be working great after that treatment. The other thing to note is that animals were fed ad librium meaning they ate what they wanted.  Frankly, you give me a liter of soy milk and a gutful of Roundup delivered by a tube down my throat into my stomach, I might not be eating much.  Controls got saline solution.  There was no glyphosate only treatment. The authors note that there was no difference in body weight after the close of the experiment.

As a reviewer, I don't have a problem with the experimental design or data in general. I would have used glyphosate, not Roundup because you can't rule out the likely effects of the herbcide's co-formulants.  It is a small number of animals, but they discuss the results based on those numbers and this all seems reliable.

The problem is how they present the data and their interpretations.  Here is one of the figures: 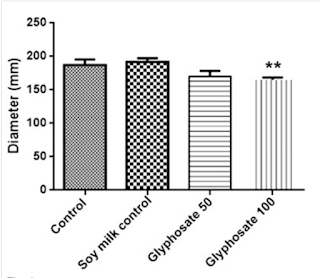 The authors do in fact deliver 50 and 100 mg/kg glyphosate, but they do this as the Roundup herbicide.  How do they know the effects are from glyphosate and not from feeding rats large amounts of surfactants for 35 days?  Glyphosate is available as a reagent, and when used has no effect in tissue-culture cells.  When applied to cells as Roundup, it does. The surfactants are soapy chemicals that allow the herbicide to penetrate cells. This stuff could certainly affect animal physiology.

This is where I got bored.  The Results are what you would expect by feeding animals tons of phytoestrogens and herbcide. The Discussion attempts to tie the results to previous work, mostly by citing in vitro experiments, and a lot of self-citation and Seralini citation.  The authors draw the conclusions:


Despite the sample limitations in this study, the results presented here show enough evidence that glyphosate impairs male reproductive system by affecting innumerous components in a prepubertal exposure.


To the best of our knowledge, this study demonstrate f(ic) or the first time a relevant endocrine disruption of a soy milk rich diet during prepubertal period. Sexual development is more affected in groups receiving soy milk supplemented with glyphosate.


My conclusion:  Innumerous?  Really? When you poison pubescent, developing male rats with isoflavones (a type of phytoestrogen) you screw up their development. Then when you add massive doses of herbicide every day for 35 days you can find differences in testosterone and sperm morphology. It shows that sick animals fed herbicides show physiological differences. Duh.

But the authors don't prefer the conservative interpretation that I would draw.  This sensational conclusion omits the fact that these were rats hammered with herbcides and soymilk, yet makes it seem like relevant doses from normal exposure.

That conclusion would not be acceptable if I was a reviewer or editor.

But it is a great conclusion for Gillam, paid by the anti-GMO industry, who can now cherry pick the scare out of the article to make it seem like food-based exposures of glyphosate are dangerous.

Same old, same old.  Actually, one huge outcome is how surprisingly small the differences are after such chemically-invasive treatments for 35 days.

Are these people that should be trusted with information about food and farming technologies?  The tweet above is deceptive, especially when you understand the paper and what was actually tested.