February 09, 2017
A month or so ago Cleveland Clinic physician Daniel Niedes posted an inflammatory column in the local news about the dangers of vaccines, including their links to autism, etc.  The article was widely disseminated in social media under the mantle of the Cleveland Clinic, using its reputation and name to promote blatantly false claims that imperil public health.

Turns out that a rogue physician that somehow drank the pseudo-science Kool-Aid decided to spew scientifically false and dangerous opinion has vetted fact from the prestigious institution.  He was apparently reprimanded and the school took a strong, scientific stance regarding the use of vaccines as an important tool in public health.

This is the familiar vilification of conventional agriculture. 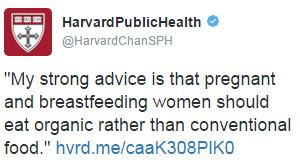 The faith and credit of Harvard Public Health being exploited to promote a personal agenda against conventional agriculture.

As always, I'm fine with organic production methods and am very happy that farmers can make a buck using them. I'm excited to see people thinking about minimizing inputs and producing using alternative methods.  That's awesome.  But don't tell me that the food is more nutritious or safer.  The data do not support  that conclusion.  Minor differences are seen for different nutrients in either direction, under different conditions, and with different plant lines.

The main claim is that "Three long-term birth cohort studies in the U.S. suggest that pesticides are harming children’s brains."

The associated report is from the EU Parliament.  I breezed through it, mostly focusing on major syntheses.  The conclusions are rather telling.

So apparently this was evidence enough to satisfy Harvard Public Health of the glaring dangers of conventional agriculture.  I'm crossing them off of my liver transplant list.

Other conclusions note associations between eating organic produce and conventional, but those are really hard to interpret.  Folks that choose organic have higher incomes, tend not to smoke, have healthier relationships with alcohol, get exercise, and stay away from consistent consumption of processed foods.  Those factors can cloud interpretations, and certainly do not mean that conventionally-farmed produce is bad.

The only thing I could find in the document that was consistent with the author's claims was a citation that organophosphates (and some other old-school insecticides) have an occupational association with some cancers, like non-Hodgkin's Lymphoma.  I don't think anyone questions those associations.

They also cite a study of California farm workers and show that women with higher levels of the pesticides in their urine associate with children exhibiting different neurological issues, scattered across deficiencies in reflexes to ADHD. The authors note that there the wide range of study designs and endpoints clouds clear interpretation and conclusions. The conclusions would not be surprising-- but again these are occupational exposures (and we should do everything possible to limit them!).

Later they delve into pesticides specifically, but again it is a set of loose connections that are not surprising. It is important to note that there is minimal residue on crops, and these levels are monitored.

In defiance of that reality, the online document with Harvard Public Health posts a link to the Environmental Working Group for information about pesticide levels on food.  Ugh.

EWG provides a non-scientific, zero-tolerance, and artificially alarming synthesis of numbers gathered by the USDA explicitly to ensure that pesticide residues are below unacceptable levels, and far-far below levels of biological significance.

The Harvard Public Health website also says, "Organic foods are produced virtually without pesticides."  Not true. Plants make their own protection, and certain non-synthetic pesticides are allowed.  Few have been tested for effects on human health (not that anything is anticipated), and some do have environmental impacts.

The numbers that they produce annually remind us that we live in a time of abundance, with the safest food supply in human history. That's what I get out of it.

There is a lot more in the EU Parliament report, but mostly a recapitulation of what we know already.  Insecticides kill insects and can have human physiological effects if used improperly.  But like everything, the dose makes the poison.

Harvard Public Health would be well guided to vet the claims made in such articles on their behalf.  These soft-science claims end up affecting a reputation.  Ask Cleveland Clinic.  They had to remove home homeopathy kits from their gift shop after the Niedes vaccine debacle.