I needed a picture of myself to send to organizers of an upcoming conference. I found this in Google images and was curious what it was: 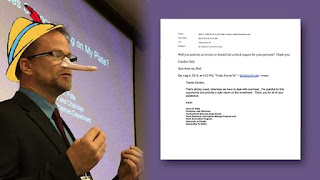 So I clicked the link and it took me to a Natural News story that talked about how I "receive bribes", "run scams", engage in "corruption".  It says that Monsanto provides me with money to take luxury vacations in Hawaii.  It was all assembled from cherry-picked comments in my personal emails that I willingly handed over to USRTK.

Of course, none of that is true.

it is simply an opportunity to hurt someone, so Mike Adams used his reaching website to produce a (well, one of many) story that was false and potentially very damaging.

When you read the comments section you see how this hateful rhetoric whips people into a frenzy.  This is just one example.  Five likes!

I thought that since it has been a year I could provide a factual synthesis of the situation and maybe at least have the proper story out there in space. So I wrote this in the comments section:


Hi Everybody, it's me, the guy that is the subject of this piece. I stumbled upon now, more than a year after it was posted. It was a sad attempt to harm my credibility as a researcher and scholar that helps the public understand science. A couple of quick notes. I run a science communication workshop. When someone offers to pay me to do a lecture or seminar, that money could go in my pocket-- but instead goes to the workshop. I financed this for years, along with organizations that would donate (farm bureau, etc).

Monsanto offered to do the same thing. That's great. It is expensive to rent a venue, travel somewhere, put out coffee and sandwiches, provide media/materials. They did the right thing. They didn't give me a script, not even a hint. They said, "We think your program in teaching scientists how to speak to the public is a good thing."
And for that, I was very grateful, and promised an excellent return on their investment-- that return being a scientific community more likely to engage the public about science.

All of this was public record (that's why it was in the emails too), all above board. Zero went to me. Zero went to my research. Zero. In the end my university took it and put it into a campus food bank because of threats against me, my lab, and my family. We had police presence in the building and the
Domestic Terrorism Task Force involved.

Because of articles like this. Read the comments below. This stokes hate.

There was no bribe, no scam, no corruption. It was a manufactured story produced from my emails which I freely provided.

Luxury hotels in Hawaii? Ha! Motel 6 in Columbia, Missouri! "Unrestricted gift" is university accounting language for "no strings attached" or "no delieverables." That means that the donor gets nothing in return. Zero.

The good news is that Adams' hateful rhetoric and the comments below are all screenshots that will be used in upcoming books, documentaries, etc about how activists try to destroy scientists' careers in vaccines, climate and genetic engineering.

The other good news is that this kind of hate brought a scientific community to my defense. I've won awards and earned tremendous respect for weathering such a vitriolic, personal attack.

Of course, all of my funding, reimbursement, etc are all public record and can be seen on my website at any time. Check it out. Not a cent from Monsanto was ever seen for research or to me personally, and not a cent was ever used for the workshops. Reach out if you ever have questions, I'm always glad to answer them.

I hit the button to post my reply, only to find out that it is "...waiting to be approved by Natural News."

It is amazing. Not only do they publish falsehoods that stoke vitriolic response, they don't afford their target to even present the factual interpretation.

Oh well. At the same time mine would be the first comment posted in a year, so maybe nobody cares anyway.

But I'm glad I saw this Adam's hit piece. It reminded me of where we were a year ago and how far we have come, and how far they had to sink. It reminds us of the anger, hate, and slander we have to endure when we simply teach science.


**** Irony Alert! --for what it's worth, 20 minutes later the comment was apparently not approved, as it was removed. The people that scream for a 'right to know' are the first to censor what they don't want you to know. ****
at December 12, 2016