The New York Times failed again, publishing a less-than-scientific ball of bias that states genetically engineered crops fail to produce as expected.  Investigative reporter Danny Hakim's opinions contrast sharply with the scholarly literature, as well as the direct experiences of the people that understand the benefits and limitations of the technologies-- the farmers that use it. 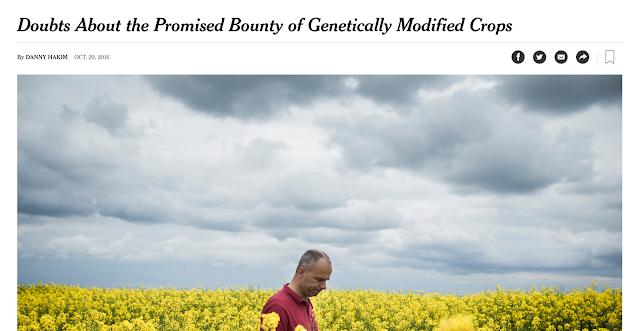 As it has been said, it is easy to trash a farming technology when your plow is a pencil.

The author here returns to two well-refuted, ancient criticisms. First, that genetically engineered crops fail to yield, and next, that they don't cut "pesticides".  These are old and familiar discussions for those of us that have studied this subject for their whole careers.

We could spend a lot of time reviewing the data Hakim used to reach his conclusions.  But rather than point out the flaws in his highly selective, cherry-picked analysis (which Dr. Andrew Kniss did skillfully here), it makes more sense to provide the points you need to intelligently refute his shallow claims.

1.  No genes for yield were ever installed.  The current suite of biotech traits were not meant to improve yields, they were made to ensure yields.  In other words, they help ag producers farm with lower costs, fewer insecticides, improved weed control and virus resistance in some cases.  The same yield at a lower cost is better for farmers.

2.  What are "pesticides"?  Hakim, like many that want to tell an anti-biotech story, use the term "pesticides" to make claims that farm inputs have increased.  They look at total amount applied in weight.

But "pesticides" is a catch-all term for the combination of herbicides, insecticides and fungicides.  If you separate that into its components, you see the advantages of the technologies.

However, the amount of herbicide used has increased in total.  That's because there are more acres of crops being grown, and in some cases there is more herbicide needed per acre (more than the 750 ml per acre normally used) needed to treat resistant weeds.   Yes, when you add up the total used it has increased since 1996. But in 1996, Roundup was only sparingly used on farms, as well as in residential and municipal situations.

When herbicide-resistant crops showed their advantages in 1996 and were adopted on many farms because of their increased productivity, of course the amount of herbicide would increase.

Using his words and logic, it is like saying the number of cell phone cases have "skyrocketed" since 1996.

It also is important to note that the number of pounds of glyphosate also reflects its increased use in farms for non-GMO uses. It is used to kill the vegetation on land left fallow and along fence lines.  It is used in tree-crop production to remove weeds from rows and under trees.

Like Benbrook (the economist whose salary and research were 100% paid by the anti-GM industries as he wrote highly-criticized, low-impact articles that included estimated data), Hakim lumps all forms of chemistry together to create the outcome he wants-- more pounds of pesticides being used.

He also ignores the simple fact that not all farm chemicals are the same. You can't just compare amounts. You need to consider relative toxicity. And the products farmers have switched to have much lower environmental impact relative to what they replaced.

3.  You can't make valid general statements about yield.   When you analyze the GE-traited crop against its non-GE counterpart in side-by-side comparisons, you see trends.  Equivalent yields can be affected by location, crop, pest pressure, weather, etc.  Mainly, the trait has no effect on yield.  Sometimes it is higher.  Occasionally it is lower.  Mostly, it is exactly the same.

I was on a panel years ago with Dough Gurian-Sherman, the guy who wrote the piece "Failure to Yield".   I spoke of specifics of yields as reported from the peer-reviewed literature. He agreed with me on just about every case.

You have to consider the specifics.  For instance. The GE trait in papaya has demonstrated incredible effects on yield for papaya farmers.  Massive increases in yield saved an industry.

4. Farmers are shrewd business men and women.  There is a certain arrogance in proclaiming a technology is a failure, when millions of professionals choose it because it works.  Farmers choose these technologies even though they cost more money, as Hakim correctly points out.

Therein lies the implication that our ag producers somehow can't do the math.  To say that they are willing to pay more for less performance undermines the tight business acumen of our farmers. The one percent that feed the rest of us know about a bottom line. If any product fails to perform, producers change gears to find alternatives. 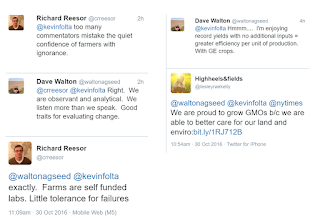 Great to see the ag community adding their informed viewpoints.

To conclude:  For decades people have tried to suggest that genetic engineering technologies are dangerous or environmentally deleterious.  We certainly know the realistic risks, but none of the dire predictions have ever emerged.

Critics then retreat to "failed" rhetoric.   It is amazingly sad that a venue like the New York Times would publish such a report.  Time will show that it was another poor-quality report that cherry-picked data and presented biased analysis that supported the hypothesis the author wanted to support, not the conclusion proven my millions of farmers that choose the technology-- because it works.