In poking through my Twitter feed I find a curious post. It is being circulated that I agreed to do a debate, but then backed out.

As a guy that studied rhetoric, loves a debate, and coached debaters for a long time, I relish the opportunity to debate, especially scientific topics.  I've debated evolution, climate and genetic engineering issues over the last decade.

So to read online that I was invited to a debate and then backed out was quite surprising.

Turns out that it starts from that guy in Ithaca that is obsessed with legitimizing his anti-GMO crusade.  He has been harassing people on Facebook for some time.

Apparently he and Jonathan Latham* (another anti-GMO, anti-science zealot) organized a debate, only didn't bother to actually extend real invitations to me, Jon Entine or Karl Haro von Mogel, of course, saying that they did, and that we won't show.

In social media they are taking a victory lap, claiming that we are afraid to debate them and of course, the message is being amplified by the throngs of blind followers that put platitudes and lies ahead of actual information. 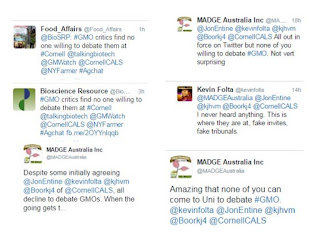 Funny that they are declaring such victory in a debate they never formally invited anyone to. "Biosciences Resource" is Latham's broken effort. Why would anyone trust anyone that engages such dishonest tactics?

Karl, Jon and I all asked for any evidence that we accepted an invitation.  Crickets.  Still they celebrate their victory!

First, if you want me to come to any event that requires travel, good luck.  I'm booked solid for 6 months and you simply can't organize something next week and then say I backed out.

Second, if there's no way to compensate me for travel, I can't do it unless I pay personally. I don't have funds for such things.

Third, if you want me to attend a debate, you need to let me know first.  USRTK and others have made sure that my email address, phone number and address are plastered all over the web, so don't say you can't find me!

Pick up a phone, send an email, even send a letter through snail mail.  Our fax machine works too, maybe.  You have to let me know that I have been invited to a debate, before you can say I accepted and backed out of a debate.

Turns out, today Jonathan Latham (who stood outside a Cornell event I was speaking at last year and handed out libelous flyers about me) put an "invitation", stashed deeply in the comments section of a September 2, 2016 blog post on September 26, 2016.

The invitation is placed in the comments section of an old blog, nine days before the event.  Tremendously weak move.

Between answering 200 emails a day, writing grants, running a leading department, running a huge lab and getting sixty minutes a day for food and gym, I don't usually parse the comments sections of old blogs.  Weak move guys.

In pre-internet days Latham was probably one of these guys that wanted to go to a party with the cool kids, but they spray painted an invitation under an overpass 100 miles from where he lived.  When he complained about not being invited, they said, "We invited you... you didn't see it?"

Latham and the other guy's full-time job is to trash technology and erode trust in public scientists.  This is their mission, to harm those that teach science. This is just another desperate stunt of a dying movement, and a weak attempt to discredit the people that actually have the credit.

To claim that I was ever actually invited is a lie, and to say that I backed out is an even bigger one. I think it is wonderful, as this is the kind of stuff that turns off the people we need to influence most.

This is the trend.  The anti-GMO movement can't discuss evidence.  They have attacked the scientists and look horrible in the public eye for what they have done, while we look better for enduring the slander.

All they have left is to create fake events, like this "debate" or the upcoming Monsanto Tribunal.  They can control the information, so they make the event seem legitimate to a handful of internet worshipers, and take another poke at public scientists that actually contribute to teaching and research.

If you are opposed to biotechnology, you need to think about this very hard. This is the best your movement has.  These are the people representing your cause.  These are the underhanded tactics that you stand behind?

It is really sad because this topic needs honest debate and discussion. Karl, Jon and I (or a handful of others) would always be willing to take part in such events, provided there was an actual invitation and there was reasonable advanced notice.

Unfortunately an honest conversation is not what Latham and that other guy actually want. Their goal is to try to pump oxygen into the corpse of a failed ideological movement that harms the poor, the farmer, and the environment.  Such efforts must involve further deception, as they could never win the discussion through legitimate scientific discourse.

* Latham was handing out defamatory flyers at an event in Ithaca, and when I approached him he changed the subject and scurried like a ship rat.  He didn't have the guts to back up the fifth he as presenting about me, and continues to propagate defamation to this day.  This is his modus operandi and this cheesy Twitter campaign is just a sad extension of his pitiful existence.