September 18, 2016
The New York State Parent-Teachers Association (NYS PTA) has presented itsproposed resolutions for the 2016 school year. Leafing through them I find comfort in Retention #4 on page 2 that clearly states that textbooks and instructional materials will be up-to-date, factual and unbiased. Such strong affirmations guaranteeing adherence to teaching based on our best methods and evidence is a credit to the NYS-PTA.
But on page 13, New Resolution #1 breaks the pledge of up-to-date, factual and unbiased. The resolution being considered makes several claims about “Genetically modified organisms (GMOS) and genetically engineered (GE) foods”. They cite a “link” between such products and “negative health consequences”, that their standards ban “unhealthy products”, and claim that there is insufficient evidence that such food products are safe for human consumption.
This new resolution asks for state legislation to ban products from genetically engineered plants (actually they say “GMOS and GE foods”, but I’ll be more precise in my wording) in school meal programs and vending services. To its credit, the resolution does recommend that parents and community members receive education on “GMOs and GE food products.” No argument there, as long as the education is based on legitimate reproducible scientific evidence, although I suspect the authors have different intentions.
New Resolution #1 concludes with a statement. The second line reads, “Some research suggests an association between GMO and GE food consumption with grave health hazards, such as tumor development, kidney and liver toxicity and even death in laboratory and food production animals.” That is not factual and unbiased, as guaranteed in Retention #4 on page 2. 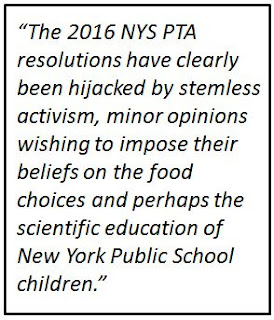 The statement continues, “Other research suggests environmental hazards, such as killing off of beneficial microorganisms and pollinators, and contamination of water supplies.” The statement concludes, “Until GMO and GE food safety is conclusively supported by good science, NYS PTA proposes acting with caution and keeping these products out of school provided food and drinks.” Again, allegations and a conclusion based on no credible scientific evidence.
It is clear that we need to be teaching our students to think critically, that they need deeper immersion in science, technology, engineering and math, the STEMdisciplines. We need to be training the next generation of scientists and engineers with the up-to-date, factual and unbiased information requested by the NYS PTA in their opening Retention #4.
So how can the NYS PTA ever claim to support STEM disciplines and adherence to evidence-based information, when they are suggesting food bans based on bad science? How can they seek to teach students how to critically weigh evidence when they fail to do that in their own proposed resolutions?
The statements the crafters of the resolution made are not based on evidence. They are extensions of bias and belief, of perhaps an activist agenda that periodically visits school boards and PTAs. For example, in recent years school districts wanted to label science textbooks referencing evolution as “only a theory”. Other school districts have sought to use textbooks that challenge evidence of antropogenic climate change. The anti-genetic-engineering sentiment is just another example of forcing bad policy to match the beliefs of a few on a fringe that pick and choose the scientific information they wish to consume.
How can we teach students to respect the scientific method and to trust peer-reviewed and reproducible science, when the rules and restrictions they are educated under reflect distortions, myths and falsehoods?
The National Academies of Science, the USA’s most esteemed brain trust, performed a massive review of the scholarly literature and probably one-hundred interviews with scientists on the topic of genetically engineered crops. Their conclusions—there is no evidence that these crops are unsafe for consumption, and there is no evidence of any health risk greater than crops derived from conventional breeding. Certainly they recognize some environmental impacts such as the generation of resistant weeds, but that is an herbicide and management question more than an indictment of genetic engineering as a variety improvement discipline. There is no evidence that these crops have negative effects on pollinators by virtue of genetic engineering.
The health risks the crafters of this resolution cite are aging relics from one-off publications that were typically not based on proper scientific design or performed with proper statistical rigor. In all cases, such reports have not been independently reproduced or expanded, and fade into the forgotten gutter of bad science, or perhaps in retrospect have a stink of scientific misconduct. Good science grows. These reports were dead on arrival, and now slowly disappear into irrelevance.
The 2016 NYS PTA resolutions have clearly been hijacked by stemless activism, minor opinions wishing to impose their beliefs on the food choices and perhaps the scientific education of New York Public School children. How can we expect our children to be excited about science, technology, engineering, and math, if the rules they live under shun STEM, and are built on an agenda of politics, ignorance, fear mongering and myth?