A letter arrived on Cornell University Dean Kathryn Boor's desk this week. The same letter was sent to the Board of Trustees. Sixty-seven people from New York State's organic farming community requested that the dean give the Cornell Alliance for Science the boot from the campus.  They feel that such efforts have "no place at a Land Grant institution."

I'm familiar with the Alliance for Science and have even participated in their training sessions and discussions.  I'm know what it is, what it isn't.  It is stunning to me that people would complain to university administration that the exchange of scholarly ideas regarding agricultural technology would be objectionable.  Well, maybe not so stunning. 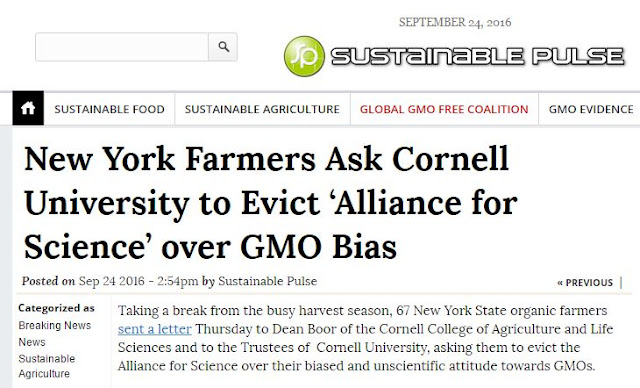 The headlines at Sustainable Pulse present the argument against Alliance for Science. It is, "We don't like that the evidence fails to support our beliefs, so we want you to stop talking about it."

In short, the Alliance for Science recruits international fellows, students, scientists and others to teach them the science behind new agricultural technologies.  The efforts are supported by a $5.6 million grant to Cornell University from the Gates Foundation. Their stated mission:

The Cornell Alliance for Science seeks to promote access to scientific innovation as a means of enhancing food security, improving environmental sustainability and raising the quality of life globally.

Now let's keep that kind of stuff off of our campuses.

The participants represent many countries, and see technology as a way to improve lives of the needy in their homeland.  They have witnessed poverty and experienced food insecurity from the inadequacies of traditional agricultural methods.  Like others, they do not want to be the recipients of aid, the handouts of the affluent West.

Instead, they want to feed their own nations. Technology, and perhaps genetic engineering, has a role in those agricultural innovations. 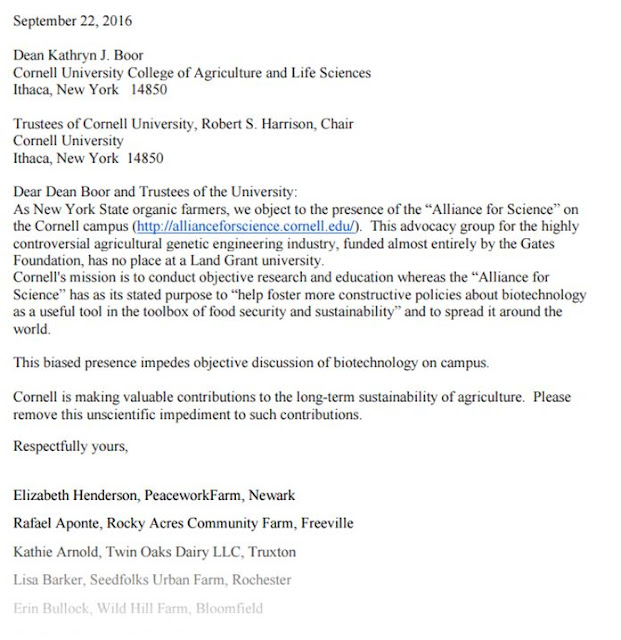 The letter to Cornell University Administration. Instead of stating precisely what content is objectionable, they want to censor topics they consider "controversial".

When I participated in Alliance for Science we saw talks from plant breeders, animal breeders, experts in biotech and experts in traditional genetics. I never got the feeling that it was "advocacy".  Not at all.  It was scientists teaching others about science. That's what we do.

The problem is that here's a letter that says to a university program run by university faculty, we don't like what you are teaching, so the university should stop it.

Can you imagine if this is how decisions were made in universities?  We could not teach about climate, vaccines, evolution, stem cell research.... the list goes on and on.

Universities should be a marketplace of ideas, but ideas that are defendable and borne of evidence.  If Cornell's Alliance for Science is a biased, dangerous, propaganda, public relations move as critics claim, then bring out the specifics.  Here is the presentation I gave.  What is false, biased, or not in keeping with what we know about science?

The letter writers bypass the scientific process.  That is, they don't like the evidence, don't like people learning evidence, so they complain to university administration to stop that information from flowing. Cornell, you are sciencing too much and it must be stopped.

Science is not a democracy, it is a meritocracy.  Good ideas prevail and they don't worry much about your beliefs.  If something is objectionable to this sect of New York State farmers, they should present that evidence.  Let's have an honest conversation.

Writing a letter, complaining to university administration, calling for a science program to be removed from campus is just a weak move.  It comes off as petty and childish.  What we learn from organic farmers is important to many production scenarios. This letter again makes those adhering to organic production techniques come off as a wacky fringe, rather than a scientific discipline, and that just sets the field backwards.