Girl Scouts- Standing Up for Science

Two years ago I wrote a blog about an eight-year-old girl that started an online petition to remove transgenic-crop-based ingredients from Girl Scout cookies. Again, I admired her drive and interest, but was appropriately critical of her surfacy scientific understanding. She claimed that "GMOs studies (sic) (in animals) have linked them to infertility, immune problems, accelerated aging, faulty insulin regulation, and changes in major organs and the gastrointestinal system."

It could be an honest third-grade interpretation of the scholarly literature.  Probably not.

More likely she was simply a pawn of flimsy parents that paid good money for an anti-GMO book at Whole Foods, only to have their food fears reinforced by a popular TV doctor, leading to the de-education of their daughter.

That's something I'm firmly against, as I want young women to be excited about science, not taught to fear it because parents are twits. 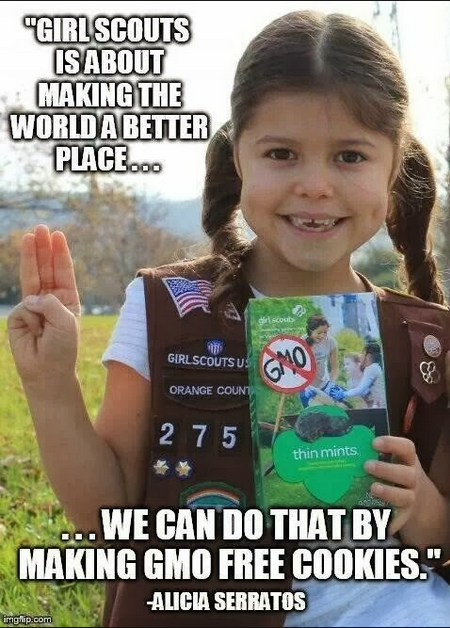 I wrote a blog about Girl Scout anti-science activism and ticked off a few parents.  You'd think they'd be thanking me.

That day I received a prickly email from her furious mother, angry that I’d criticize her daughter and her anti-GMO mission.  Kindly, I offered to travel to her daughter’s school, at my personal expense, to talk to her class about crop biotechnology.  I never heard back from that irate mom. Seems that facts incompatible with her narrow worldview is not welcome.

But so far the Girl Scouts have stood firm with science, and this year made a strong statement that they would side with science before folding to a handful of activist mothers, whose arguments are as thin as their mints.

Excerpted from the Girl Scout's statement.  This is how you build strong women-- Teach them to think critically and to embrace science.
We need to build the next generation of strong women by teaching how to use all tools, including biotechnology, as mechanisms to help solve at least some of the world’s grandest challenges. Girls need to be excited to participate in science, and visualize how to use it to help the environment, serve the hungry, and drive sustainable agriculture. They are the next generation of leaders that will actually get to deploy the molecular toolbox that four decades of scientists (molecular biology is about 50% women) created.

To teach girls to fear science, or to fight against science, is incredibly damaging. I'll go so far as to say it is even child abuse. It instantly eliminates options from their futures, and sets them up to be easily manipulated by others.

Furthermore, to inform young women that science is the zone of liars, conspiracy, and company-owned sellouts is a tremendous harm that only pushes them away from the future’s most promising careers.  Women are central to driving the new technology that will frame the future of food. Biotechnology, with its benefits and limitations, will be at least part of that future.

Instead of enlisting girls into internet campaigns designed to coerce removal of safe ingredients from luxury foods, let’s have an honest conversation about what biotechnology can do to help farmers, the environment, the consumer, and the developing world.  Let’s talk about how girls can grow up to lead positions in agricultural science, biotechnology, bioinformatics, Big Data, and the highest paying jobs of the future that have deliciously wonderful human benefits and sweet environmental impacts.

Somewhere out there there’s a girl by a card table full of cookies that just might grow up to solve some of our world’s most pressing problems. She’s sharp, inspired, and poised to make a difference. That is, if we support her development in critical thinking and STEM-- and steer her away from the misgivings of parents that place a broken political motivation above teaching their daughters to integrate with reality.