Roundup In Air and Rain? What the Report Really Says

This week websites across the whackosphere exploded with the the news. 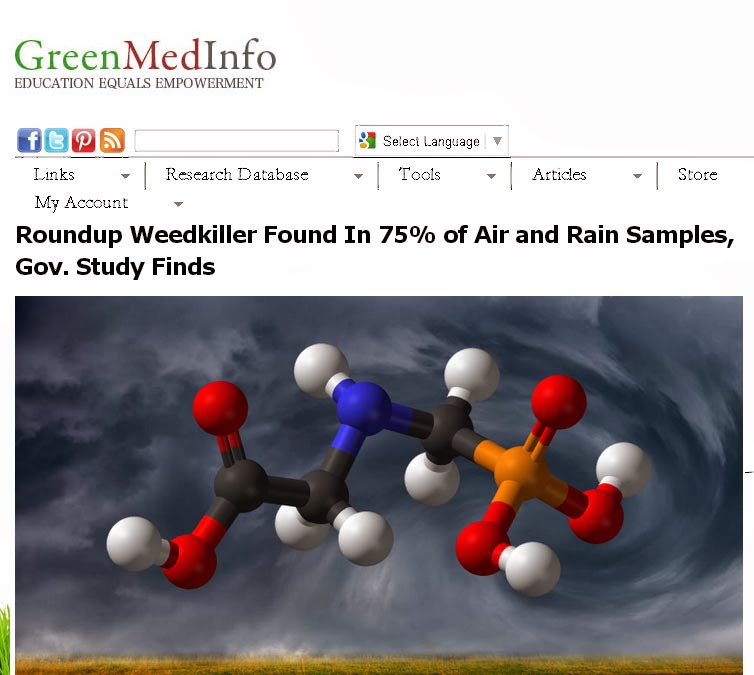 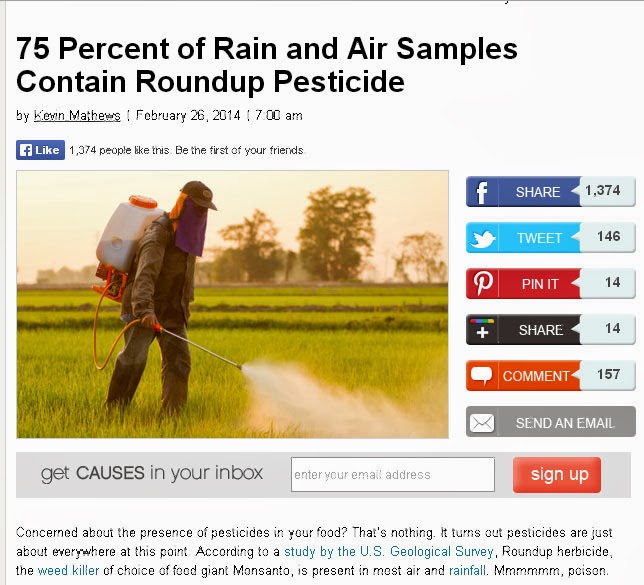 Wow, that seems pretty remarkable.  I wanted to get a copy of the actual research paper right away!


I wanted to learn more, but I could not access the paper at Environmental Toxicology and Chemistry.  So how did all of these websites and their scholarly journalists get the manuscript?

I contacted one of the paper's authors, Dr. Paul Capel, and asked for a copy and he kindly sent one.  Apparently I was the first.  Seems like those coming to the conclusions of the websites above were acting true to form-- skimming an abstract and drawing a conclusion that best fits their desires.

So I actually read the paper!   Want to know what it says?

In short-- the conclusions from the websites above are cherry-picked nonsense.

First, the paper's authors do this work because ag chemicals volatilize.  I never realized to what extent, but wind, rain and other factors stir up otherwise latent chemicals and it is important to understand what is present.  The authors did such a survey.   They performed a survey in 1995 and 2007, at two separate sites in northwestern Mississippi that support 80% of the state's agricultural harvest, mostly supporting corn and cotton.

The authors note that the region had similar area farmed between the two dates, but the management was quite different, the biggest differences being the introduction of GM crops and the discontinued use of several insecticides. They sampled air and rain in this agricultural region over a growing season to understand environmental flux of ag chemicals. The areas had similar rain patterns.  Samples were analyzed by GC/MS, so we're talking sensitive detection.

The authors are obviously quite skilled at analytical chemistry, as they reliably detect glyphosate, atrazine, and a dozen other chemicals in air samples in 2007.  Glyphosate is detected in 75% of samples, atrazine about the same.  The authors even found Molinate, a compound that had not been used in four years-- this is sensitive technology!

THIS is what the articles above discovered, that chemicals were detected in these samples. Detected?  That means it is there, but it does not say how much is there. More on this later.

Figure 4 shows the difference in herbicides between 1995 and 2007. Peak applications are in May, as expected.  What you see is that glyphosate becomes the main herbicide detected.  What the activist literature does not bother to tell you is that the increase in glyphosate substitutes for "other herbicides". Atrazine levels decreased 36%. Trifluralin was present in almost every sample but its levels were 20 times lower than 1995. Essentially, glyphosate removed the need for other herbicides with higher environmental impact, a fact well documented (e.g. Duke et al., 2012).

CONCENTRATIONS. Oh, and don't forget to look at the y-axis units.  We're dealing with nanograms per cubic meter.  Considering these compounds are biologically relevant at the conservative level of milligrams per kilogram, we're talking about levels millions to billions of times below any biological relevance. 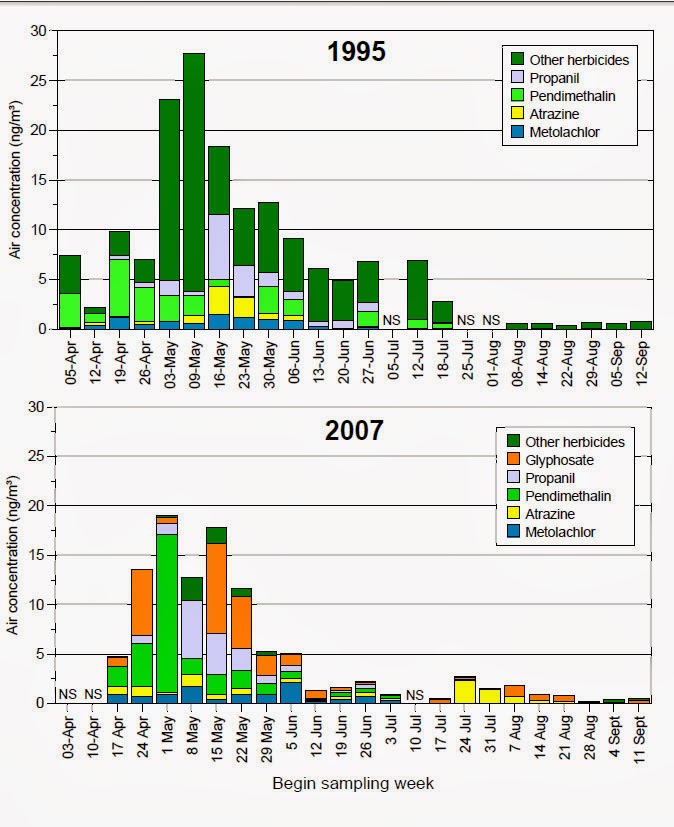 What the data really show is that tiny amounts of ag chemicals can be detected (ng /m3), and that between 1995 and 2007 glyphosate substituted for herbicides with more potential impact.

Here's another set of data that the scummy green media seemed to forget to report, but more likely they didn't read it because it was not in the abstract.  The trend from 1995 to 2007 shows a decrease in insecticide use.  In 1995 methyl parathion was heavily used in Mississippi on cotton (160,000 kg!). By 2007 its levels dropped twenty fold.  In 1995 there was high reliance on Chlorphyifos and malathion, and by 2007 the levels were down substantially, the authors citing "no local use". All "other insecticide" levels were lower as well.

The introduction of transgenic (GMO) Bt cotton and Bt corn, the two principle crops of the region.  Of course, the crazy green media forgot to take the blinders off to see that. 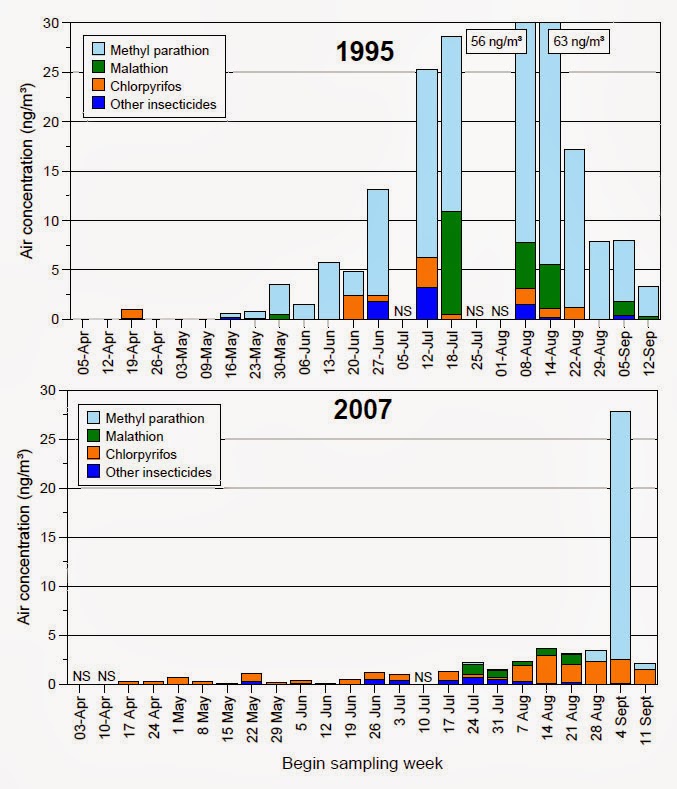 Insecticides detected in 2007 compared to 1995.  You clearly see what may be attributable to the effect of Bt corn and cotton, that the GMO products work as claimed to decrease insecticide requirement.  The authors do not explain the 4 Sept peak in methyl parathion.

Basically, the paper says that when you get into an ag area you can find ag chemicals, if you have sophisticated equipment and plenty of know-how.  The authors discuss that they sample two different sites with different crops growing, so that could affect data and account for some of the weirdness and spikes observed..  It does not change the take-home message that agricultural chemicals volatilize and persist in the environment, so it is best to minimize their use, use chemicals with less environmental impact, and choose seeds that require less chemical.

Some additional points to note:

1.  The use of "Monsanto's Roundup" in the titles.  Glyphosate was detected.  While AMPA was also detected and is a breakdown product of glyphosate, the test did not find "Roundup" and the authors do not say "Roundup" once.

2.  The headlines above come from places where nobody actually read the paper.

3.  The same information outlets neglected to mention that glyphosate increases offset the use of other herbicides with more impact, that insecticide use was down, and that the levels were nanograms per cubic meter.

These are all important to note because is reveals how misinformed, ignorant and willing to deceive the anti-GMO media really is.  They are not out for science or truth, it is about an agenda.