A Proper Goodbye for Fred Phelps

There's a special place in hell for Fred Phelps, and a few extra slots for the loons that surround him.  At least that's what I always said.  For some reason I've always read about the exploits of Westboro Baptist Church (www.godhatesfags.com), provoking my own visceral reactions about such misplaced emotion and energy that could be used for more churchy activities.

The congregation is best known for its extreme views on homosexuality, other religions, and the picketing of major tragedies.  Whether it was the death of a soldier or a tornado through Joplin, Missouri, Phelps and clan showed up to note how the deaths were the acts of God and a message to those on earth.  They financed their events through funds gathered from lawsuits, and are quick to note when their civil rights were violated, successfully suing municipalities. 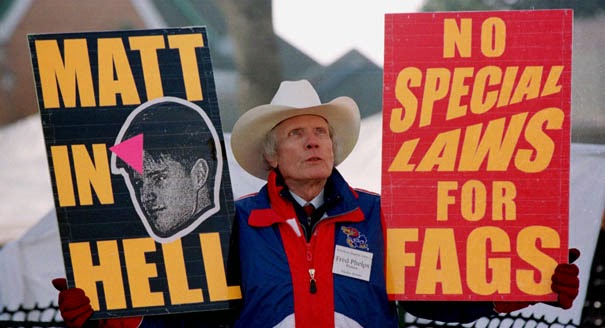 When someone is as bad as Phelps, should we celebrate his demise, or is it time to show love and tolerance-- qualities they don't know?

Last week I smiled when I heard that Phelps was critically ill. I even tweeted something snarky about it. As I stewed, I realized that I was falling into the same trap-- celebrating someone's ultimate demise because I denounced his fundamental beliefs.  In so many ways good riddance felt appropriate.  But it was too easy.

As I painted my black block letters on fluorescent pink, yellow and green God Hates Fred sign, I started to think about this differently. The expected response to his death is one of hate and anger, capitalizing my own feelings on his family's loss.  Am I responding in a primitive and unrefined way by being happy about his death?  Was I being just like Fred Phelps himself?

Sure, it felt damn good.  The guy is/was/will always be scum. He's caused a lot of heartache and hysteria, ruined thousands of lives and hurt many others.

But isn't this exactly why we need to say nothing?  Isn't this why the most eloquent response will be one so deep and meaningful that Fred's flock cannot comprehend it?

They are expecting a massive, hateful and inflammatory picket of his funeral, one even Fred would be proud of.   That's exactly why we shouldn't give it to them.

What if we instead said nothing?  What if we let this guy pass into the ether and not even notice?  What if we show he means nothing to us, that his thoughts didn't affect us?

Even more, what if we showed empathy, compassion, tolerance and kindness at his family's worst hour?   Can we be everything they are not?  Should we show the love and forgiveness that a church leader did not possess?

We can show them what it is like to be decent humans, and remind each other of how love and kindness always win over hate?