Over the last few weeks I've read alarmist posts about radiation in the water in California and how fish are all contaminated with radioactive compounds from Fukushima.  To recap, the massive earthquake off the cost of Fukushima, Japan on March 11, 2011 caused a massive tsunami and strong tremors that damaged the Fukushima nuclear plant.  It stands as an emergency situation, and radioactivity broke containment.

But in usual form the anti-nuclear environmentalists seized the opportunity to claim that the whole world is now in jeopardy due to the radioactive emissions from the nuclear plant. 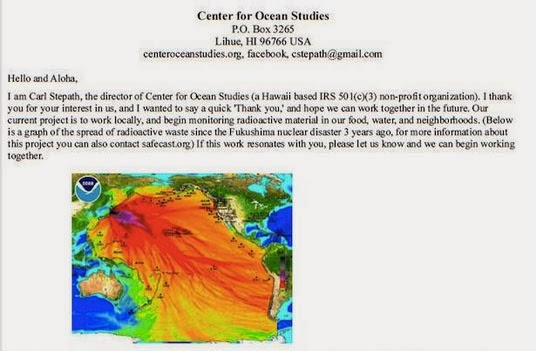 The Center for Ocean Studies claims that the graphic shows the range of radioactive waste emanating from Japan after the accident.  Not so fast...

I've seen this colorful map a few times, claiming to be the distribution of radiation from Fukushima.  Several things pop to mind.  First, if you took the raw materials out of Fukushima and dumped them off of the Japanese shore, they would not distribute like this.  It does not follow the normal currents and flow. Second, there's no way that there'd be enough material to cause those detectable differences, especially near the South Pole.  There just isn't enough material to spread like this and be measured above background. The earth and universe make plenty of radioactivity, so background is always an issue.  Specific isotopes like Cs134 could reflect a recent disaster, so those are being monitored. That's not this chart.

But the most telling error is the NOAA symbol, a notation from an agency monitoring ocean tides, currents and waves-- and not worrying much about radioactivity. 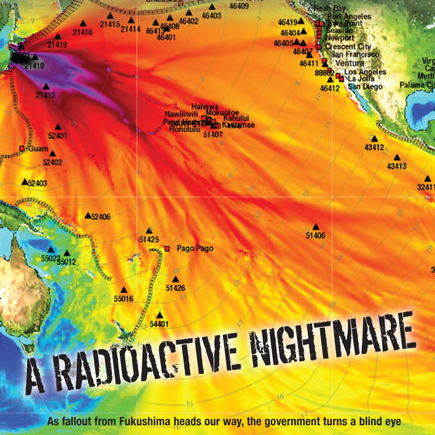 Other blogs sound the alarm the government conspiracy does not want you to hear.

With a little bit of sleuthing I found that these images actually show wave height maxima, as reported by ocean bouys.  Not so exciting, just really cool, and shows how powerful the tsunami really is!

Of course when you then go into social media and let people know that the data are not from radioactivity and are just wave heights, they get a little prickly.  It took 10 minutes before I was told that I'm a paid shill for the nuclear power industry, financed to cover up information on the internet.

Then I just remind them that Chile also had an earthquake and tsunami, no nukes involved. 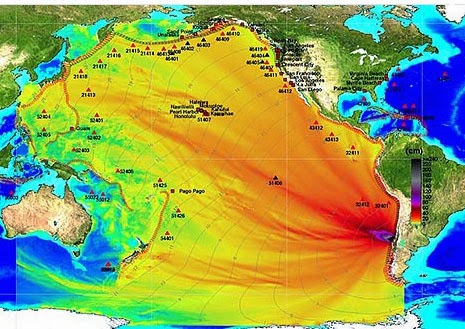 The same site shows wave heights from the Chile earthquake.  Not radioactivity.

To the non-critical mind a rainbow of swirly colors is certainly compelling, and probably important evidence of something awful humans did.  In reality, it is a testament to how wonderful it is to be able to monitor and report geological phenomena.  These maps are a symptom of a safer world, allowing detection of changes that could have major ramifications.

Instead they are contorted to fit the activist agenda.  Once again, manufacturing risk and building fear in an attempt to influence little minds that will believe what they are told.