The anti-GMO movement is corrupt in that it does not change minds with hard evidence, it changes them with fear.  It uses the most powerfully motivating emotion to drive an intellectually bankrupt agenda.

In the West, what are our biggest fears? We don't worry about where our next meal is coming from, the well being of our farming industries, or if everyone has enough to eat.  We worry about our personal health, about obesity, degenerative disease, or cancer.  We worry about increasing prevalence of disorders like autism, allergies, asthma, Alzheimer's disease. These are the fears in the industrialized world.

Knowing this, opponents of biotechnology will play off of those fears.  Look at their rhetoric. 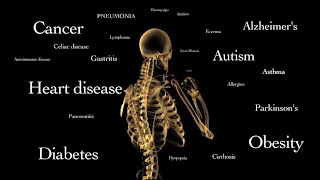 Transgenic technologies cause every problem known to man.  As you can see, we never had any of these problems before the use of GM foods. Stay hot Jeff!   from Genetic Roulette

China is home to 1.2 billion people and growing. They grow plenty of GM cotton, and cite lower pesticide application rates and other benefits. They also are generating a pipeline of transgenic technology, and the government is comfortable with ramping up these efforts to feed a growing population.

Anti-GM activists cannot advance their agenda if governments worldwide adopt, expand and benefit from the technology.  They need to block progress. The companies of Big Activism, like Greenpeace, have active tentacles in these countries to organize against the technology.  Just like in the USA. 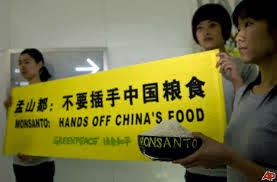 A protester stands with a bowl of Monsanto's famous GMO rice.
Oh, they don't have that yet.  But it is good to frighten people!

But unlike the USA they cater to a different set of fears.  In China people are not nearly as obsessed with health problems. The mindset is a bit different.  They don't have widespread obesity, allergies, etc. The principle causes of death are stroke, coronary heart disease, lung disease, lung cancer, traffic accidents and liver, esophogeal and stomach cancers.

What is their biggest fear, especially in the younger generations?  Reproduction.

With rules and incentives to decrease family size most young Chinese couples are parenting only one child.  Having a child is a massive priority, so this "you've got one shot" approach is quite troubling to many. Right now the biggest bubble in the Chinese population structure is 25-35 years old, in the child-bearing window.

Infertility is on the rise and has been for the last four decades.  Currently 12.5% of couples are unable to conceive. It is so important that women unable to conceive are looked upon with disdain and pity. Inability to carry a child has been the basis of divorce, and unregulated IVF clinics are popping up everywhere.  The reasons for soaring infertility are unknown, but are are hypothesized to be based on pollution, environmental toxins, later parental age and stress.

But if you ask a 20-something on an urban street they will tell you the main problem is GMO food. In 2000 this was not a concern, and GM foods were looked at favorably.  Currently in China corn and soy are the only transgenic imports and they are strictly regulated and used only for animal feed and oil processing, so people are not directly consuming the products at this point. China is developing its own GMO rice and corn.

Still, in Chinese anti-GM social media it is widely reported that people in the USA do not eat transgenic soy and that the imports into China are a kind of "soft bomb", a plot to limit reproduction and kill people with cancer.

Xiaoyu Wang, a leader of the Heilongjiang Soybean Association, made the claim that imported GM soybeans from Argentina and Brazil cause sterility and cancer. Of course, without evidence. His organization grows non-GM soybeans.  Sound familiar?

Scientists in China clearly unite around the potential utility of the technology and the government is trying to promote more development of transgenic solutions to environmental and health problems. Monsanto and other western biotechs see China as a huge growth opportunity, so the Chinese government obviously would like to use home-spun technology. We'll see how that goes.

As time goes on watch how activist groups conceive new means to fertilize fear around human reproduction in China.  More importantly, note how this approach shows how science can be distorted to optimally play off of they fears of a population to maximize benefit to an activist agenda.