A Generous Offer to Dr. Huber -Turned Down

This is the beginning of the end of this particular sad tale of fear mongering and misinformation.

Anti-GMO darling Dr. Don M Huber is on a tour of the Sunshine State, giving two talks in Tallahassee and one in Gainesville.  In Tallahassee he got a rock-star's welcome with coverage on the news describing how dangerous GMO food is, and a meeting with politicians.  On my calendar November 12 had a big red circle on it for some time. Huber was in town tonight to tell his story of poison food and deadly new organisms.  I went with one of my favorite organic & sustainable extension/research faculty and had a GREAT time.

I never saw Huber's whole shtick.  It starts out about the failures of biotech and the crisis and danger from glyphosate.  A lot more on the details of his talk later.  Seriously, it was a science abortion.

A significant portion of the presentation addressed his mystery organism.  He allegedly has identified this novel not-quite-a-virus, not-quite-a-fungus plant-animal kingdom-hopping pathogen in 2005, according to his slide.  He attributes this organism to widespread plant harm, problems (like abortion) in cattle and a slide of disorders in humans.  The audience was amazed, a new infectious agent, probably made in the Monsanto dungeon. 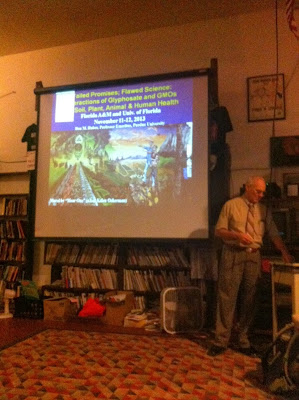 
At the end of the talk I was identified in the room by Marty from Florida Organic Growers as someone in favor of biotech and we had a good smile and a certainly civil introduction.  Marty and others don't realize that I support all kinds of low-input ag and defend organic all the time. Still, all very nice.

He asked me if I had any questions for Dr. Huber.  "I have a lot of questions," I said, "But I want to start out with a kind offer."

STOP HERE.  ALL OF THIS CONVERSATION IS ON VIDEO AND AUDIO RECORDING.  EVERYTHING HERE CAN BE VERIFIED.

"I offer to sequence the genome of the pathogen and identify what it is," I said.  "If Dr. Huber could kindly give me a small amount of the culture we could identify this new life form before Christmas."

I'm not bluffing here. We could do that.  I could pay to have the libraries made and get several lanes of Illumina sequencing done in a few weeks. We'd get several hundred million 'reads' (small bits of data) that could be computationally assembled into a whole genome of his novel organism, if it actually existed.  If it was real, we could have 300-fold coverage of its sequence.  Completely do-able, and I'd pay for it.

"So can you send me cultures?" I asked.

What do you think his answer was?  After a ten minute talk about the organism and how it is killing cattle and causing problems he said he would not send it.

I said, "Don, you say this is a crisis, that a new pathogen is causing disease in humans and plants, and you won't release it to the broader scientific community for eight years?" 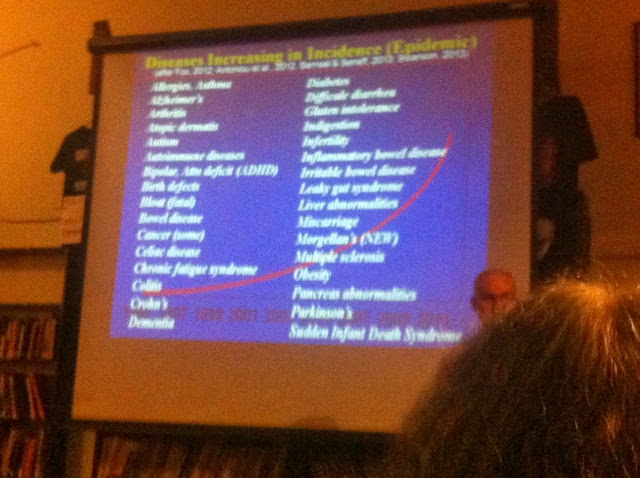 It's tough to read this blurry slide, but my hands were shaking so hard from the blatant abuse of science and deliberate confusing correlation with causation, this is the best I have. I was livid.  he also blamed GMO and glyphosate as the causal agents of Morgellan's, as "agrobacterium has been identified in the muscles of the affected"  Ugh.


He assured me that he had an international team working on it.  When pressed for collaborator names he said he could not reveal them because they would be threatened.

He went on to say that if he relinquished the new pathogen that I'd be threatened and others would be too.  I told him to meet me in a parking lot and hand me an unmarked tube, that I'd take the heat, that I am not afraid.  If I was threatened, we'd blow the roof off of the conspiracy.

"You can culture it yourself very easily," he said.

At this point people in the Huber-friendly audience were getting annoyed with his evasive nature. "Why can't you just give it to him?" one person asked.

I asked him to send me the culture protocols and instructions on how to isolate it.  He then said that I could probably not isolate it, that it is probably a prion.

THIS WENT ON AND ON FOR 15 MIN.  He's not sharing his finding with the broader scientific community. Period.

I was frustrated and all he did was deflect and misdirect. I offered again and again to sequence the organism.  He went back and forth about whether it was even an organism, he said at one point that "it has no DNA", said at another point that I could never culture it.  It was 100% obfuscation.

Clearly the audience was seeing through his garbage at this point.  I wish there were 1000 people there to see his slimy gymnastics. One farmer in attendance afterwards said, "If someone is at that put up or shut up point and they keep making excuses of why they can't put up, you know something isn't right."

To add insult to injury I talked to Huber afterwards and asked him about the replication of the "Stunning Corn Comparison" that he finked out on with Vlieger and Ho, after I pressed them for an independent replicate.

The best part is that a room of interested and passionate people got to contrast how garbage science and real science behave in real time.  I offer to do the work, my efforts are blocked with threats of threats, alleged technical impasses, and restricted distribution of the materials-- materials he says cause disease and death.

In the early 1980's a new disease called GRID was infecting many people, primarily IV drug users and men in the gay community.  Scientists sprung to action to identify the source of this horrible pathogen. A few years later after hundreds of international efforts set out to identify the causal agent, the Human Immunodeficiency Virus was identified and published in Science by two independent groups. 1983.  A couple of years, 30 years ago when we didn't have nearly the tools we have today.

Within a few years we knew HIV's epidemiology, the structure of the virus, the way it spread and evaded the immune system.

This is how science works.

Huber has a pathogen he says causes massive human disease and plant death.  He will not release it to the wider scientific community for further tests, even after eight years of no publications or any signs of progress.

But he'll jet set around the nation scaring people into believing his story. This should speak volumes.  It did tonight, and in a room not usually warm to biotechnology.

What I saw him do tonight was scare people for two hours with frightening slides, no controls, speculation, outright bogus claims, flawed logic and straight-up fear.  Concerned heads around me nodded in acceptance, taking his authority as a credible source of information. I was so mad watching him misrepresent science and flat out spread misinformation to an interested audience.

It stops here. I want to shine light on his false claims and starting with his pathogen is step one.  I'm really angry about the distortion of science and the use of science to build fear.  Here comes the science hammer.