Starting a few weeks ago the European Commission began a public feedback period on the regulation of gene edited crops.  Gene editing is a relatively non-invasive, rapid way to make precise genetic alternations of crops to improve specific traits. Changes made frequently emulate natural variations.
The EU has had excessively harsh restrictions on transgenic technology, not approving any new genetically engineered crops in decades. Activists wish for the same hyper-rigorous repression of technology to be applied to new plant genetic improvement techniques.
EU farmers and scientists almost universally feel that the technology could have some benefit, and should be part of the region's technologies.
So when the European Commission opened a public comment period, it was spammed by an avalanche of identical and near-identical comments that were distributed by anti-biotech groups.  No thinking, just copying and pasting as they were told to.

The European Commission asked for scientific, thoughtful comments and instead got slammed with spam.
The part that anti-biotech groups and their lackeys forget is that science is not a popularity contest.  It doesn't matter how many people cut and paste your misguided rant into the form. It still only represents one opinion, zero data or citation, and in any "anti" movement you'll can always find a willing group of parrots willing to repeat exactly what you tell them.
Cut/paste = LAZY.  The reviewers are not stupid.
I watched this develop over the last few weeks, and while anti-biotech groups would not persuade anyone at the EC, they'd take a victory lap. After all, there were thousands of comments against the relaxed restrictions on gene editing.
And true to form it happened. 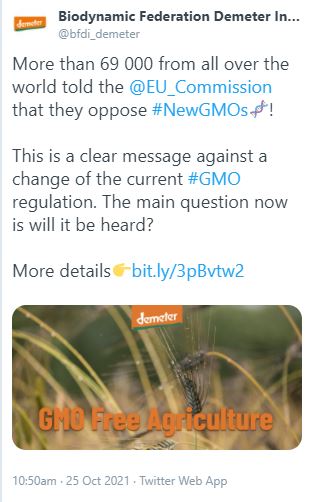 Leave it to the followers of Rudolph Steiner to get the science way wrong. During molecular biology class they were busy putting cow poop in a horn to harness cosmic energy.
It is amazing that the anti-biotech folks would claim victory after encouraging a campaign to spam a sincere effort to gather information about a new technology.  Luckily, the folks at the EC will hopefully be persuaded by this overt manipulation.
Those that have lost the argument raise their voices.  When you don't have the science on your side you have to spam the conversation in an attempt to minimize the actual science communicated.
If I was a regulator in the EC and had to weed through cut-and-paste nonsense to get to the nuggets of actual information, I would not be so happy with the anti-biotech folks.  My guess is that this will backfire. Ultimately decisions are made on actual evidence, and your opinion doesn't matter, even if pasted sixty thousand times. That's why the EC even asked for scientific comments.
This is why I appreciate science and sports.  They are the last meritocracies, the last places where superior performance still ultimately wins.  That's why the EC opened the public comment period.  Change is happening.
Don't take a victory lap just yet.
at October 25, 2021