Report on the Problem You Create- The Rise of Cyclical Sensationalism 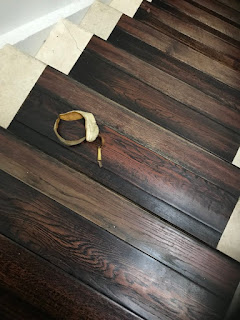 A reporter places a banana peel at the top of the staircase in a local mall. A customer walks toward the stairs only to be shoved by the reporter onto the banana peel and down the stairs. The customer dies from traumatic injuries.

The next day the reporter's headline reads, "Customer Dies on Mall Stairs."

The same reporter repeats the assassination ritual a few more times and shares the story of a negligent staircase widely on social media. he also cites his own article from the previous week, giving the impression of an epidemic of dangerous stairs. From there it spreads among local mall patrons.

The next week the reporter's headline reads, "Customers Concerned about Staircase Safety at Mall."

A visible trend is emerging in crank journalism and slimy activism-- reporting on the significance of a problem that they themselves created.

For unethical "journalists" it is a way to create "evidence" that their errant or malicious position actually has support. First they produce media or messaging that makes a bogus claim. Next, they cite their own media source to create the perception that their bad claim has wide support. In other words, they strategically place the banana peel and shockingly report when someone slips on it.

I call this cyclical sensationalism.   It is a case where maliciously motivated can create faux news to fool the reader into believing a false claim is legitimate. This tactic is used for several reasons:

1.  To harm the credibility and trust in legitimate scientists.

One especially egregious violator of ethical standards uses cyclical sensationalism as a mainstay. Paul Thacker foists the patina of a legitimate journalist, but in my estimate he's a stooge working for the anti-GMO, anti-5G, anti-scientist interests like US-RTK.

He started writing fallacious stories about me in 2014, and trolls my social media accounts with regularity. Some of his work has been retracted by ethical journals.  Other stories he has written appear in Grist and The Progressive, and all target me unfairly and inaccurately.  Both Grist and The Progressive failed to take action when I notified them.

The Progressive did offer me a 250 word rebuttal to the 10,000 word hit piece. I declined.

The point is, he is one of very few writers that seem to scam publication outlets into publishing his filth.  So he writes new hate pieces and then links to his own old work citing the name of the source (e.g. The Progressive) rather than the author (him).  The goal is to trick the reader into believing that there are independent, legitimate voices that agree with his claims, and that he's not a lone goof libeling scientists.

I complained to Grist about the piece they hosted.  In the article Thacker states without question that my research can't be trusted because it is compromised by corporate influence, which is absolutely not true.  As I stated in my letter:

"... he (Thacker) does the execution, leaves the shotgun in your closet, and then uses social media to say, “Hey, look who Grist just killed.”

I'm not the only one. He's done this to other scientists like Dr. David Gorski, and good journalists like Keith Kloor and Tamar Haspel. The list is reasonably long, but he has a special eerie tumescence for me.

Retweets and shares come from linked accounts held by the same person, or within a tight network of cronies, provides a false sense of legitimacy or consensus to poor scientific ideas.

A really good example is US-RTK, the science hate group that seeks to harm reputations of scientists on behalf of the industries that pay their bills.  Gary Ruskin and Carrie Gillam retweet Stacy Malkin's posts (both US-RTK employees), then US-RTK retweets their retweets. Usually it does not go much farther than that.

3. To give the perception of mass interest in a non-problem that they describe as a risk.

A recent tweet by the Non-GMO Report claims that 49% of US adults...  you can read it! 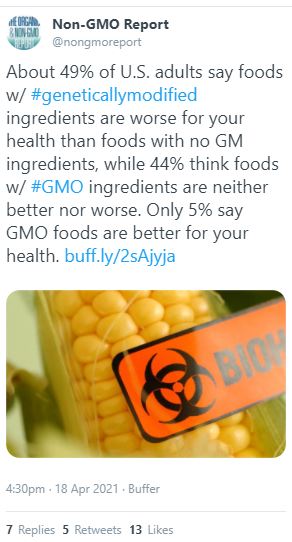 Duh!  When an organization endlessly maligns a technology and makes false claims about it, certain elements of the public are influenced. They then report about the phenomenon they helped create!
This example is a great case of cyclical sensationalism, creating the problem, and then pretending to independently report that there is a problem. The BIOHAZARD sticker is 100% intended for shock value. When the world is trying to figure out who to trust about food and farming, consumers are influenced by this malicious messaging. 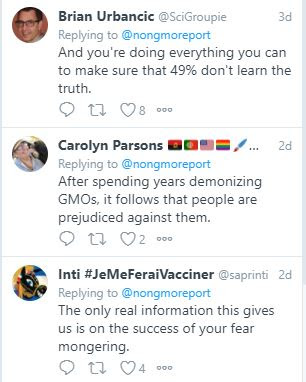 These are just three ways that self-citation and near-network amplification spreads misinformation.  It is cyclical sensationalism, and is becoming more common as crank claims and pseudoscience become more prominent through the limited filters of social media.