Are You Harming Your Best Advocate?

Be careful when you take action to eliminate an informed voice from a conversation. In the days of the internet such cancellation can be permanent, and if you remove someone that has a clue, it might just come back to work against your best interests later on.

Throughout the 2000's and most of all in 2015 and to this day, there have been activist groups and unhinged individuals that wanted me silent.  Whether it is weird professional jealousy, the fact that I run a highly-rated biotech podcast, or the fact that I am a trusted source of scientific information, I attract vicious critics.

But I'm consistent about two things:

1. Speaking from the evidence and the data.

2. Admitting when I'm incorrect and adjusting.

Other folks added their interpretations of emails, professional actions and even crept eerily into my personal life. Gross.

The defamation for teaching science remains permanent on the internet to this day.

Why does it matter?

Because it forever serves as a touchstone for those that reject the science I teach, it is a get-out-of-science-jail-free card to those that want to debate climate change, vaccination, genetic engineering or evolution, but rely on bad evidence and conspiracy to fortify their bankrupt positions.

Case in point.  Last night I had a pleasant conversation on Twitter with someone (now going by "Fauci is Mengele" that was certain he was correct.  He was not.  He drew a chorus of supporters that chimed in about the COVID19 vaccine that was untested, experimental, dangerous, and blah, blah, blah.

Painted into a corner with evidence to counter his anti-vax claims, he "did research" on me and posted this: 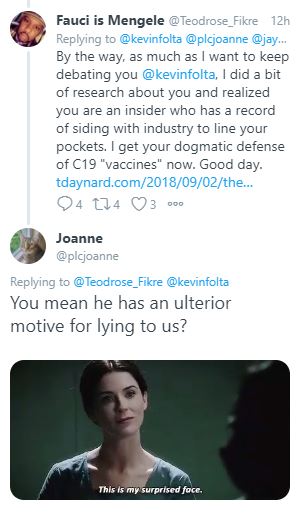 Fauci is Mengele "did a bit of research" to eliminate my knowledgeable voice from an important conversation.  A tip of the hat to those that work to slander scientists.
And the fact that I've not "lined my pockets" and am hardly an insider doesn't matter. I've been a academic scientist my entire career and have a strong record of public service.  The fact that the New York Times used out of context quotations (at times eliminating words to reverse their meaning) and false interpretations to harm my reputation is something I'll carry to the grave.
From the New York Times, 9/5/2015 regarding me:

I reject the notion that teaching science is a "corporate public relations campaign"
Also from the New York Times, 9/5/2015

When I first read this in print I spit my coffee all over the screen. Inner circle?  I'm a freakin' piss-ant public servant that begs federal agencies for funding to do great science and train tomorrow's scientists. I WISH I was some kind of inner circle lobbyist or consultant!
This kind of rhetoric provides an easy disqualification for those that cannot discuss the evidence.  If they can't address your arguments with conspiracy and websites, they eliminate you from the conversation.  This is especially true towards me because I treat everyone with profound kindness and do influence those watching the conversation.
So be careful of trashing academic, public scientists in big, public, visible ways.  At the end of the day they do work for you, and the reputation you are harming may be that of one of your best advocates.