I read the tweet and immediately was overcome with a vacant, empty feeling.  It was a cold and heartless castigation, aimed at hurting someone that was already down, someone experiencing monumental anguish.

Now, they were piling on. Cold, cold hearts.

A radiation oncology resident named Dr. Sara Bertran Ponce was expecting a child.  She was 14 weeks into the pregnancy and all was well.  She received the COVID19 vaccine and proudly shared the experience in an interest to encourage others to do the same. The following quotation appeared on a Vox.com story about the safety of the vaccines during pregnancy.

Inspiring, courageous words of Dr. Ponce, guiding others to follow her expertise to protect others.
Her twitter stream showed the words of a public advocate, someone dedicated to public health. 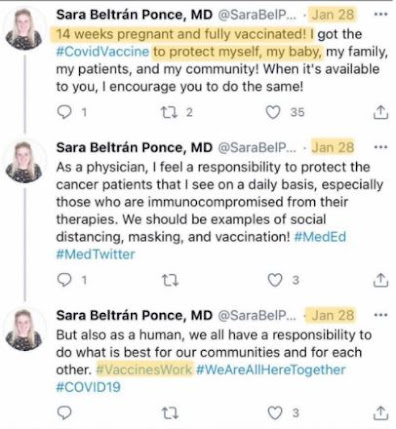 And the #vaccineswork hashtag was certainly raising the blood pressure of many that see the COVID19 vaccines as a threat to their bankrupt movement.

At that point Dr. Ponce placed herself officially on the radar of a hateful movement that silently stewed. Qualified physicians, clearly strong women professionals, worked to sway public opinion with their visible compliance with vaccination in a public health crisis.

And the brutal punishment began.

The dark slime of the internet oozed into social media space, adding insult to injury, and attacking a professional during a time when she needed love and compassion.  But that's what the internet does best, especially the horrible folks within corrupt movements. Your deep personal loss is their time to celebrate. 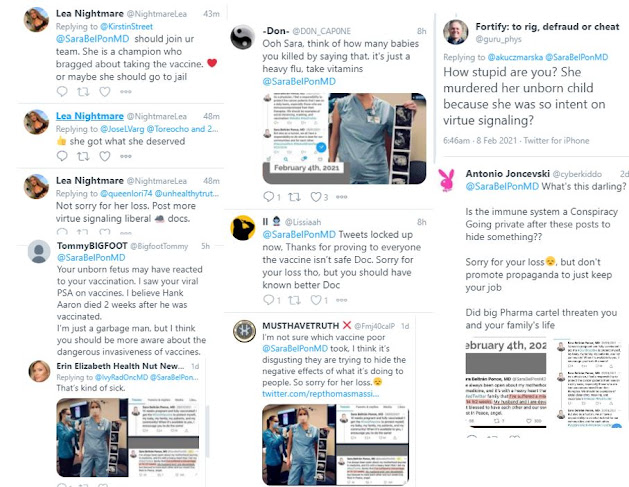 Just a sample of the first few tweets around Dr. Ponce's account. The woman in scrubs is NOT her, but a doctored (ahem) photo of a pregnant physician that was added to the tweets.

It is cold, ice-water-in-the-veins hate. No empathy, zero compassion.

This is the anti-vaccine movement. Self-appointed authorities, self-described experts, and cruel and heartless people.

She has closed her account.  Good. She needs to heal.

What can we do?  Share this story.  Show how awful this movement is.  Disgust is a very powerful motivator, and if we can get people to see what the anti-vaccine movement is about, perhaps we can garner their trust, then protect them, their children and their communities.