The Goop brand is synonymous with horrible health advice, packing bogus treatments and misinformation as credible medical intervention.  Now the originator of the brand, Gwenyth Paltrow (self-described as knowing nothing about science) has a new streaming video series coming on Netflix, permitting a pipeline of misinformation to penetrate even more deeply. 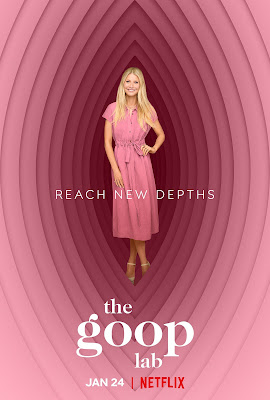 Netflix gives its grand stage to Paltrow, providing a larger audience to mislead and even harm.

Paltrow and her brand have loosely targeted women's health issues offering a series of claims, advice and products that have been highly criticized by legitimate physicians like Jen Gunter.  Like Gwenyth's hinterparts the Goop brand has only picked up steam.

What's the harm?  Paltrow's celebrity status affords her immediate cache as an expert in everything.  The scientific evidence clearly shows that celebrity advice influences vaccination rates, cancer screening and cancer treatment.  On the other end of the spectrum they just take money and reinforce non-scientific practices (like drinking urine or engaging 'detoxes').

Dr. Timothy Caufield has written about this extensively, and that sound you hear is his head hitting his desk.  His scientific debunking show, "A User's Guide to Cheating Death", was discontinued by Netflix.

Science out, goop in.

But the greatest threat is that celebrities like Paltrow erode trust in legitimate medical therapies, oftentimes citing the alternatives they sell and promote as the "cures Big _____ does not want you to know about."  This popular practice can kill.

But Paltrow and her ilk have the resources to afford to be stupid and make mistakes. Sadly, others damaged by their misinformation are forced to live with the consequences.