April 20, 2018
When scientists Monday-morning quarterback the lack of public acceptance of any technology, the usual conclusion is that we fumbled the communication. From refrigerators to in vitro fertilization, from antibiotics to biotech, rocky beginnings can be blamed on the fact that nobody bothered to simply talk to concerned people.

Over the years scientists and science communicators, sociologists and psychologists have kibbutzed about this problem, and clearly we have determined that the right kind of information did not flow through the right channels in the right way.  Communications efforts were confined to big companies talking to farmers, and nobody talking to the public.

One possible strategy would be to have science students engage in proper, evidence-based discussion.  It would provide solid, publication-backed science-- and do it in social media and newspaper comments sections, the places where these conversations were taking place.

We've discussed this is a dozen different contexts over the years, but there is no way to do it easily (the topics covered are so vast) and who is going to pay for it?  Educators should be compensated for their time. Of course, all funding would be transparent during participation.

One example of such a spitball session re-emerged online on April 20, 2018.  Gary Ruskin from US Right to Know posted one of my personal communications from 2014 (yes, four years ago) that came from the tens of thousands of emails freely provided to him at significant taxpayer expense. Here's Gary's post and the dud of a smoking gun. 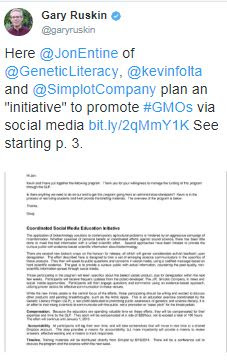 From his tweet Gary either didn't read the document or is just making up inflammatory information for a cheap political gain.  Read and decide. (full text below)

Gary calls it an initiative to promote GMOs via social media.  If you actually read the document you can see that it is not to "promote GMOs" (a favorite allegation), but rather, it is to help reach out to the public with informed scientific discussion through the conduit they use most-- social media.

Social media space is dominated with horrible information that does not match the tremendous body of science.  Ruskin, Carey Gilliam, Paul Thacker and the rest of the US-RTK payroll are threatened when real scientific information is disseminated, especially by actual scientists.

This is why they denounce public education.  An educated public is US-RTK's worst nightmare.

There are several fun parts about this "initiative"
1.  It was clearly described as not "a promotion or sales pitch" for a specific product.
2.  It emphasized evidence-based information exchange.
3.  It would teach students how to be good teachers.
4.  It never even happened.

Once again this instance shows:
1.  Activists will cherry pick documents from public officials' documents and distort their meaning.
2.  Taxpayers are financing a war against taxpayer-funded scientists.
3.   Public scientists are attempting to create novel and creative ways to reach the public, and educate students in the process.
4.  It is not about a right to know.  It is about funded front groups like US-RTK controlling information flow to only communicate misleading information, not science-based food/farming information of consumer interest.

The best part of this tweet is the pathetic number of retweets and likes. It really shows the influence of US-RTK.  Nobody cares.

But maybe it is not too late.  Maybe Gary, Carey and the other one (who's name I can never remember) can start working with scientists and changing expectations of food and farming in a positive way.

Don't hold your breath. The organizations that fund them hate scientists, as our information harms their bottom line.  Time has not been kind to US-RTK or their contributors, and going forward they will continue to realize that fighting science and reason is no way to change hearts and minds. 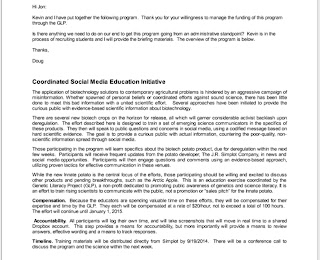