I used to really trust Amazon.  Product reviews were important because you could see who was a verified purchaser, and then use their guidance to aid in decisions.  Not anymore.

Amazon is now in the business of deleting reviews that could affect their corporate bottom line.  This sort of smacks of conspiracy, but it makes sense.

The book "Whitewash" by Carey Gillam was released last week. Gillam is a vicious anti-biotech activist that has distorted the truth and outright lied about science for over a decade.  I have not read the book, but I will.  I suspect it is more of her nonsense. 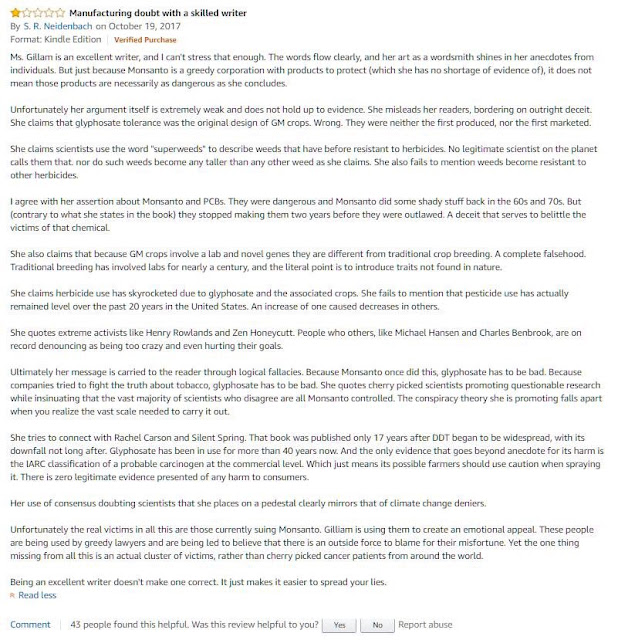 I don't agree with everything Stephan Niedenbach says and does, but this review is consistent with the science behind the chemistry, and the track record of Carey Gillam. It was removed from Amazon's reviews of the book to ensure the slander of conventional farming and more profits for Whole Foods/Amazon.

The whole thing is covered best by @mem_somerville here.

1. A middle-school teacher from Maryland buys a copy, reads it, and writes a review.  It compliments Gillam on her writing and then is scientifically critical of the content, providing point-by-point analysis.

2.  Gillam rebuts his comments, says that he just works for Monsanto.

1.  Gillam writes for the activist organization US-RTK. She also writes this book.

2.  Glowing reviews of the book by her US-RTK employers remain on the website without disclosure.

4.  If OCA, RTK, Gillam can manipulate the public into fearing conventional farming, interest in Whole Foods goes up.

5.  Whole Foods is owned by Amazon.

I don't normally think conspiratorially, but consider that Gillam and US-RTK have hammered me and other scientists for tenuous, non-financial relationships with [Big Corporation].  Here industry groups pay her via USRTK to publish weak claims (actually since this book was in development the wheels of many arguments have come off) that target conventional farming.