Comments Blocked by the "Right to Know"

Awesome.  For the second time in as many days I have been blocked from providing scientific content to rants on YouTube regarding California Proposition 37.  After all, it is about the Right to Know, as long as it is something they want to hear!

The situation happened on a YouTube video "That Monsanto does not want you to see, Brought to you by Nutiva and Elevate".  It presents Danny DeVito, Bill (don't vaccinate your kids) Maher, and other Hollywood luminaries that I don't recognize.  They tell us that it is a 'right to know' what's in our food, a point I don't organically disagree with, yet maintain that prop37 is an inappropriate, highly flawed, vehicle.

So I begin to comment in the 'comments' section under the name "Swampwaffle".  You can see, my comments are scientific, concise, polite and engaging.  I invite opportunities to share evidence and partake in a scholarly discussion.  With one particularly energetic person who repeatedly called me a "shill", "Nazi" and told me "fuck off and die", I suggested that he come visit me and share the same bravado.  I'd let a little air out of his stupid balloon real quick. Actually, my heart goes out to the little bastard and if he showed up I'd buy him a beer and some deodorant, then talk about how wonderful science really is. That's how I roll.

The best part is, they removed my comments about Bill Maher believing that vaccination was evil.  Later, after several back-n-forths with various posters, the owner of the video has blocked me from posting!  So much for Right to Know!  More like right to know, as long as it is something we agree with. 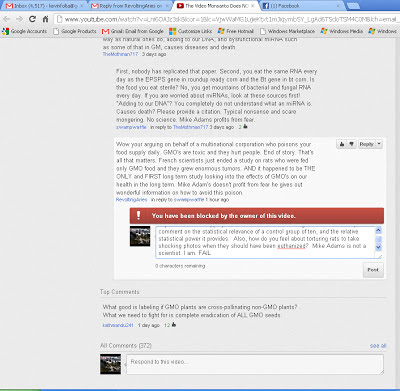 The poster of a celebrity-studded Prop37 "Right to Know" video has blocked me
from commenting on the video.  Oh cruel irony!

To me, I'll take this as a badge of honor.  A voice of scientific reason is polluting the retarded sea of contorted belief and fantasy.  This is the absolute perfect example of how this movement reeks of anti-science, anti-intellectualism and flawed logic.  They are little robots, filled with malice and no scientific training, hiding behind anonymous monikers, wielding empty threats and unsubstantiated claims.

Welcome to the bankrupt logic and reasoning of the anti-GMO movement.

Maybe you'll be compelled to waste some of your time informing the great throng of the unteachable. The video is here.  Hit mute first before loading.  On second thought, leave it on.  It is all about the Right to Know.