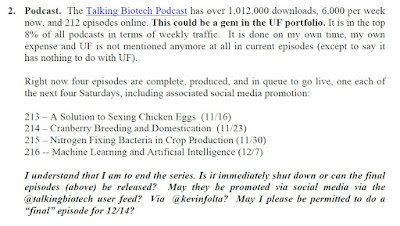 This was from a letter to university administration from me to summarize the expectations. It was clear that I was supposed to end the series. You may notice that a few more were added and the series extended through 2019.

Right now the situation is fluid. I'm going to take a few weeks to see how this settles.  The show will go on, it just is unclear if it is with me, with someone else, and out of which university.  I'm also contemplating my role in science, particularly with respect to remaining in academic science.

Thank you for your support.   Kevin
Posted by Kevin M. Folta at 4:54 PM