Words Used Out of Context

March 19, 2019
Over the last two decades I have endured daily hassle from folks dedicated to besmirching the reputations of scientists. What a proud existence that must be.

One great example resurfaced last night.  I first wrote about it on September 7, 2015.  The image shows me and a quotation, pulled from nearly 50,000 pages of email voluntarily turned over to activist groups.

There was no evidence of malfeasance, nothing unethical or illegal.  All they could do to make me look bad was pull a quotation from context.  Almost four years later that same graphic is being used by activists to impugn my integrity.


The best part is, this is all they have, and it is a distortion of what was actually said.

The email was not between me and Monsanto.  It was between me and a friend that works there.  As we go through our careers as plant scientists it is not unusual to connect with people in industry. We meet their spouses, see pictures of their kids, trade dog stories-- they are people just like us, they just work for a company.

Back in 2014 prior to the "GMO Labeling" votes in Oregon and Colorado, both sides were ramping up the rhetoric and spending huge money on misleading advertisement.  There was no discussion of the science, it was all fear-based rhetoric. Yes, both sides, and I disapproved of tactics used by both sides.

The pro-label side had a particularly egregious ad on television. It featured retired EPA scientist Dr. Ray Seidler, and he looked right into the camera and lied to viewers. You can see the whole video here.   Disgusting.

Like most scientists, we were appalled by Seidler's misrepresentation, factual inaccuracies, and blatant lies (he knows better). 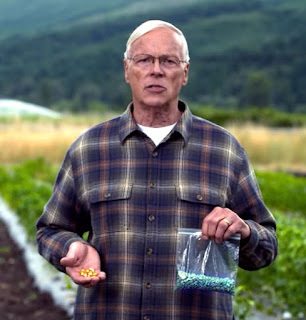 In this ad, Dr. Ray Seidler shows corn and "engineered corn", he claims are made to "withstand large doses of pesticides"-- which is exactly not true. He also says that the blue corn has "five toxic chemicals that end up in your family's food" and draws parallels to agent orange.

A friend who happens to work at Monsanto felt the same way.  Farmers in Colorado (where she works) sometimes choose their products and find them useful.  She said that the ASA (American Soil Association) was organizing a petition that wanted independent scientists to voice their disapproval about this kind of false representation of science.

They also were looking for someone to prepare an Op-Ed, hopefully a team of scientists that could condemn this kind of fear-based coercion.

Of course, I was happy to sign the petition or participate in writing the Op-Ed. 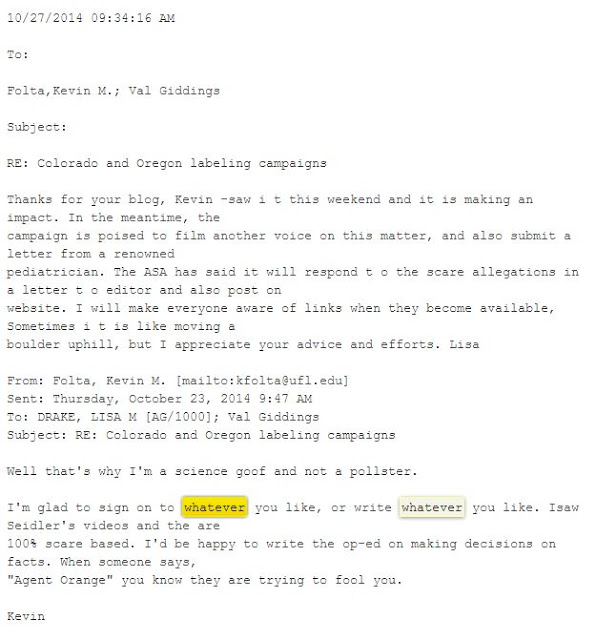 Words have remarkably different meaning when they are used in context.

The good news is that when Twitter trolls are are cherry picking quotations out of context, they are desperate.  They were desperate four years ago when this surfaced and they are only getting worse now.

It shows that they are not interested in an honest conversation, instead they are interested in harming the people that teach from evidence, share science, and debunk their fear-based messaging.