A few years ago Chipotle Mexican Grill used fear-based marketing to sell products.  They embarked on a "No GMOs in Our Food" policy that fueled a nationwide discussion, and delivered waves of customers wishing to trade their dollars for Americanized Mexican mediocrity.

Back then the only thing Chipotle really had to change was corn tortillas and chips, sourcing them from non-GE sources.  Soy oil used in frying was replaced with non-GE equivalents.  Everything else in their menu was not GE.  Sort of.

The high fructose corn syrup or sugar in their sodas most certainly came from a GE plant, and the cheese was made enzymes obtained from GE microbes.  But the stuff with high margins was somehow okay. 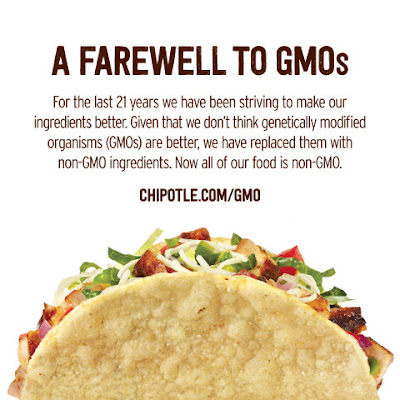 Chipotle's vapid campaign backfires as consumers and attorneys realize that there is money to be made in pointing out the inherent dishonesty in Chipotle's claims.

Now Chipotle face a class action lawsuit because the stupid campaign failed to be completely honest, at least in the eyes of some extreme anti-GMO burritophiles.

A set of plaintiffs argued in court that Chipotle did not source non-GMO meat or dairy products, and the judge agreed, allowing the compliant to proceed to trial.  Ha ha.

Chipotle should have called me as a witness on this one.  There are no genetically engineered animals to make meat or milk, so consumers never actually consumed any GE anything.   They argue that the animals ate GE crops, and that imparts a magical science essence that somehow offends the palate.

But while I feel that the judge is wrong and the lawsuit is frivolous, I'll smile and watch it unfold with my schadenfreude cup overflowing.

Chipotle had major food safety issues and harmed many people.  Instead of focusing on careful standards and practices, they instead focused on vilifying a plant genetic improvement technique that has had sound consequences for farmers and the environment, especially in developing nations.  They contributed to the rhetoric of "technology bad" and indirectly limited the spread of good technology to the desperate people that face critical food insecurity.

So while I disdain such lawsuits I'll make an exception here.  Yes, their campaign was stupid and they made money from it.  But nobody was harmed outside of overpaying for a big tortilla full of rice, beans and substandard burrito stuffins.

I am pleased that this is going forward, as it reminds us that you reap what you sow... if you make money with a campaign based on misguided fear, you will lose that money by people that are misguidedly afraid.
at October 05, 2018