Pseudoscience to Shine at Houston Museum

The Houston Museum of Natural Science (Twitter: @HMNS) is sponsoring an event that slams science, denigrates technology, and lends its credibility to a non-scientific movement.

HMNS is now an accessory to a disturbing trend.  Activist-inspired pseudoscientific nonsense is creeping into legitimate scientific forums.  Reputable museums, conferences, and science centers are cleverly co-opted into hosting or sponsoring non-scientific events, typically as part of an otherwise scientific program.  Activists do it for one reason-- to steal the credibility of the event or institution, exploiting its scientific reputation to add a patina of legitimacy to a non-scientific agenda.

The false claims of a crooked movement have now infected the Houston Museum of Natural History. On March 29, 2016 they will host Dr. TheirryVrain, a former molecular biologist that hung up the lab coat for speaking junkets in an intense mission of supporting pseudo-scientific claims.  As you can see from the website above, the lecture is titled “The Poison in Our Food Supply”, and it talks about the “damage done to our bodies” by genetic engineering of crops and associated weed control. 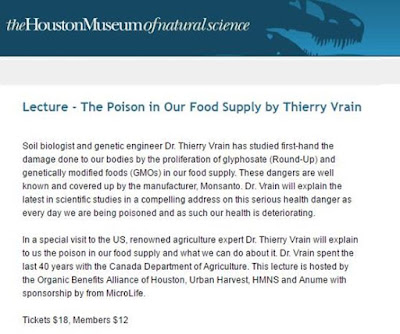 $18 to hear false information?  Why would a science museum let activists hijack their credibility?

This is especially disturbing for a science museum, because there is no credible evidence to back these claims.

Vrain is no stranger to pseudoscience. His talks feature the usual fallacies of arguments from ignorance and outdated understanding of biotechnology.  You can find them on YouTube. I even was asked to discuss one and dismantled it with a scientific a play-by-play debunking.  He says exactly what activists want to hear, and does so from the credible platform of a once-published scientist.  He is one of the darlings of the anti-GMO movement because he’s willing to look the other way at evidence to push an activist agenda and/or cash a check.

Yes, it is that bad, even worse.  This movement has a body count from denying technology to those that desperately need it.

A few years ago when the South Florida Science Center sponsored such an event I lost all respect for them.  Members from their Executive Board spoke with me and said, “It is important to teach the controversy.”

I could not believe what I was hearing.  Science museum?  We should not teach the controversy, we should teach the evidence, then debate that.   It should not be a loud and credible megaphone for activists that want to spew nonsense.

My hope is that the museum just was snookered into sponsoring an event without due diligence.  If they have any scientific integrity they should cancel the event, or at the very least write a strong condemnation of the event along with a scientific statement that indicates the event is not based on science, that it is an activist event and should not be mistaken for credible science.  They must withdraw any financial sponsorship, or at least be subject to some donor shaming.

Pseudoscience is creeping into our reputable venues.  It is imperative that we monitor those that attempt to weave denial of science, whether it is climate change denial, anti-vaccination, ant-GMO, or any one of a dozen topics activists seek to legitimize.

Don’t  give them your credibility.