What the heck was GMO at Chipotle in the first place?   Typically these places just throw some vegetables and meat in a flour tortilla, so there's not much that is GMO to start with.

However, corn chips and soybean oil are likely derived from perfectly healthy ingredients originating from transgenic crops.  Chipotle has decided to source these from non-GM sources, and that is their claim to being non-GMO. 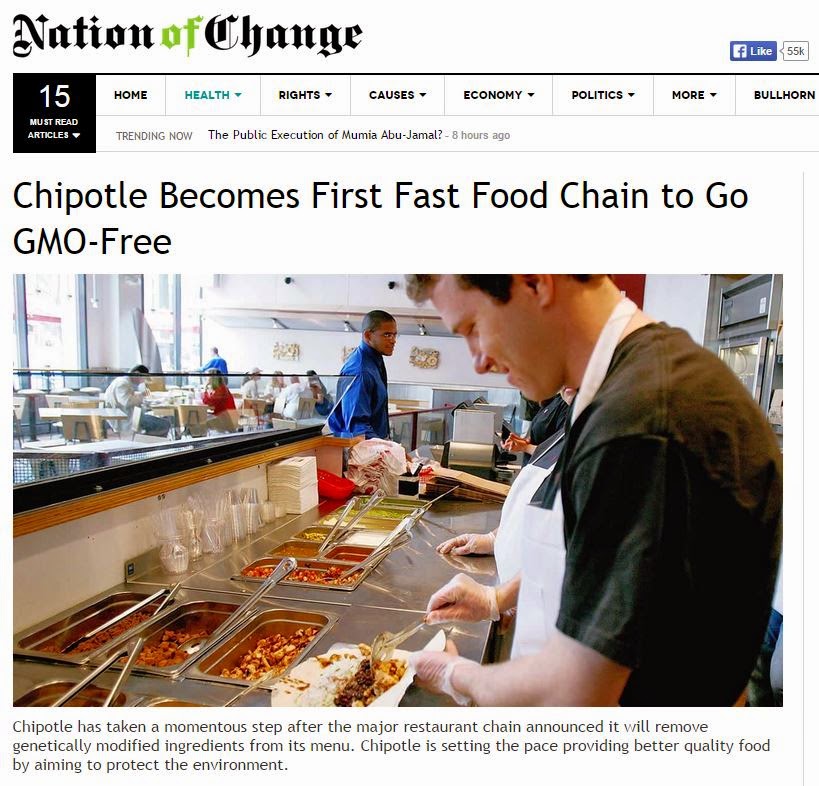 And Nation of Change is so excited!  The first fast food chain to go GMO free!   Except they aren't GMO free.
And have the same GMO profile as McDonald's or Subway.

Chipotle fails to note that they still are selling conventional soft drinks, sweetened by high-fructose corn syrup.  That is almost 100% from GMO corn.

The cheese they use is almost certainly made with rennet derived from transgenic microbes.  This is a complicated topic, but some of the best ones come from a camel gene for chymosin expressed in a fungus.  This is something like Chipotle uses, as they reported to me last year.

So HCFS soft drinks and cheese are from GM organisms, just like the corn chips.  Why not source those separately?

The answer is --- Profits. Fast food can afford to sell you a cheap main course because the profits are in the sodas.  That's been known for a long time.

If you think about it, by eliminating GMO corn chips and soybean oil, Chipotle now has achieved the same GMO footprint Subway.  They don't have corn chips or soybean oil either, except maybe that little bag of Doritos with 5 chips in it.

Is it honest to say GMO Free, when you still sell GMO products?

Does it matter to the Chipotle fans that swoon over its proclamation, even though it is not true?

Worse, they know it is not true, but they don't care.

And when will Chipotle go back to rennet from calf stomachs?  That's the alternative to the GMO version.  Maybe a bolder move- go cheeseless!  Maybe switch to synthetic imitation "Cheeze".

Can't do that. This is America, dammit.

As the great J.R. "Bob" Dobbs once said, "People will pay to find out what they really think."   Chipotle knows this.  You can say you are "GMO Free" and that's all they need to hear.  Just ignore those GMOs behind the curtain.

And Monsanto is the billion dollar corporation that is lying to us?